Portugal has some of the most popular and well considered ornamental limestones in the market and among the most in demand are those in basically beige tones. This article highlights 3 of the most well known beige limestones from the country.

The extraction of Crema Moca is limited to the área of Pé da Pedreira in the locality of Alcanede. The current number of quarries (as of 2018)is around 20 and have been active for around 40 years now.The factories that work with this limestone, apart from other natural stones, are around 75 and the great majority of these companies also do projects.

The main characteristics of these sedimentary rocks is its cut. This is done through the grain or vein, be it along or crosscut and, according to the size of the grain, are classified in three types:

Varieties of CREMA MOCA and its finishes (photos: SOLANCIS, Portugal) 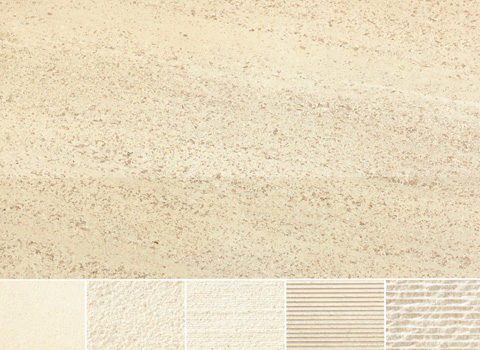 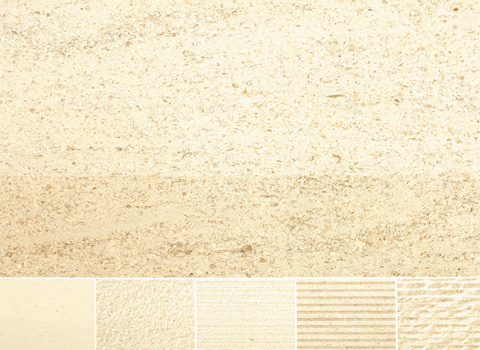 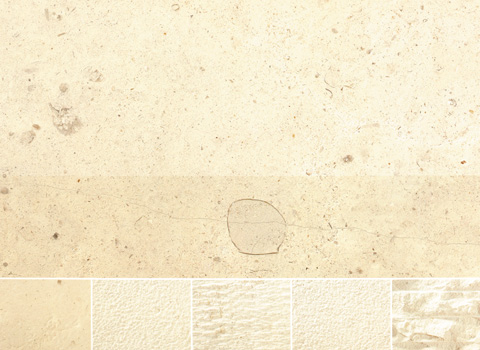 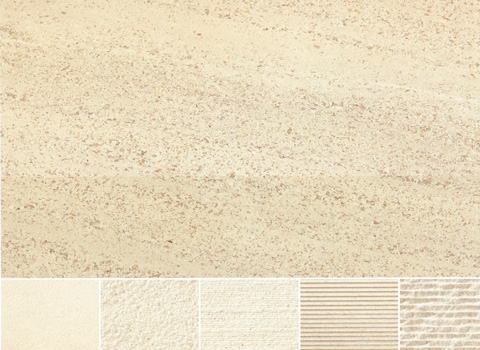 The tones of Crema Moca is clear yellow and has a base which is more or less uniform. It is the grain which changes the aesthetics of the stone. Crema Moca is a limestone less dense than its neighbouring stone Moleanos, so that its use is more recommended for interiors. Unfortunately there are some Portuguese companies who sell other limestones with the name Crema Moca. The big difference between these limestones with Crema Moca is in the degree of absorption, which is higher than the real stone, which means the “false”Crema Moca is not recommendable for use in exterior flooring and this has sometimes caused serious problems to the credibility of the real product. This problem has specially been noted in Spain.

Crema Moca can be used in claddings in floorings of low transit, on the walls and specially for chimneys, fountains, columns, etc.

The limestone Crema Moca allows for polished,honed and brushed. In the bush hammered finish the stone loses the “design”of the stone and its beige tone becomes white.

Its main markets in recent years has been China (mostly blocks), and Middle East, Europe and USA, where the product is commercialised already processed, basically for projects.

The extraction of the limestone Moleanos is limited to the área of the town of Moleanos from where it gets its name. Currently there are 5 quarries of this material which are active and the industry around it has been existing from 60 to 70 years ago. With this limestone there is a problem when thinking of extraction in the long term in the sense the quarries are located next to natural park of La Serra d´Aires and Candeeiros, in the centre of Portugal. This means the expansion of the quarries is limited and the expansion will need to be in the opposite direction of the park.

The limestone Moleanos is, basically, a stone with white colour background or a very light cream with small fossils of shells that give it characteristic dots with dark brown tones. However, there can also be a tone of grey-blue: La Moleanos Azul, or a mixture of both colours which goes by the name La Moleanos Mixta. This is one more example of each natural stone being unique. Depending on the type of grain, the limestone Moleanos of cream colour, it can be classified as:

Moleanos Blue is extracted from the same quarries as Moleanos Classic, but this tone only appears once in a while which often makes it difficult to fulfil the demand expectations.

The characteristic that makes it more attractive in the market is its strength. Moleanos is a very dense limestone in all its varieties, its absorption is very low, it is resistant to wear, and, often, even to ice. It has absorption rate of approximately 2.8%. An aspect one should consider is that sometimes other stones are being commercialised by the name of Moleanos and these stones can have absorption of as much as 8 to 10% or even more.

Because of all these qualities the limestone Moleanos becomes special for application in places with high traffic, such as exterior pavements. It is also used for exterior and interior architecture, stone walling and combined with other limestones in cladding and pavements.

The Portuguese companies sell the limestone Moleanos in blocks and also in tiles of 30x30 cm, 60x30 cm,60x60 cm, 80x40 cm and also in 120x60 cm. The limestone allows for practically all traditional finishes:polished,honed,bush hammered, flamed and brushed.

The limestone Moleanos is a highly appreciated stone, especially in the blue tone, by decorators and architects, in particular, in USA and UK.

The quarries of Crema Fatima, eight of them active in 2018,and with 25 years of activity behind them, are close to the well known town of Fatima, from where it gets its name. This limestone is the least promoted of the three. The extractions are normally done of big size blocks.

Crema Fatima is a micro-crystalline limestone with abundant bio clasts.It is of the tone clear beige and generally speaking it tends to be uniform, sometimes there are brown coloured dots. It is quite similar to the limestone Moleanos, but is less popular in the international markets. There is no problema regarding supply in the long term since the quarries are located in the área of Leiria and there is no natural park close by to cutoff its extensión.

The limestone allows for the finishes:honed, Bush hammered, lines and also polished.

Its applications are in cladding, both exterior and interior, chimneys, columns, etc.