Different varieties of marble from Carrara

When dealing with Carrara Marble, most people often imagines a single variety of stone. However, from a purely commercial point of view, the term Carrara Marble can be a very general and misleading one. It has often, and, erroneously, been used to define a huge range of different marbles (more than 150 commercial varieties) geographically proceeding from the Carrara area (= Carrara sensu stricto) but also from the surrounding areas.

Such wrong use, substantially justified by the long history of all the marbles produced in the area where Carrara is located, the Apuan Alps region (Northern Tuscany, Central Italy), and by their commercial diffusion, can generate deep misunderstandings, since one single name “Carrara Marble”, is given to almost any commercial variety of marble. It would, therefore, be more correct to use the words Apuan Alps marbles, the most famous of which is the Carrara Marble sensu stricto (Figure 1). 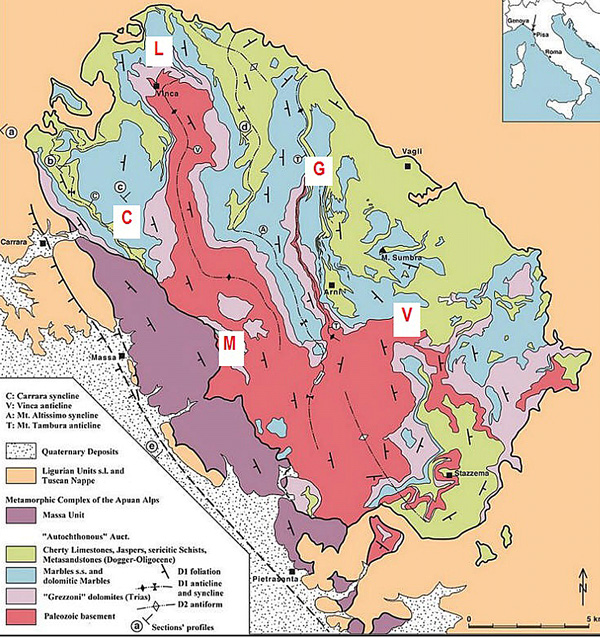 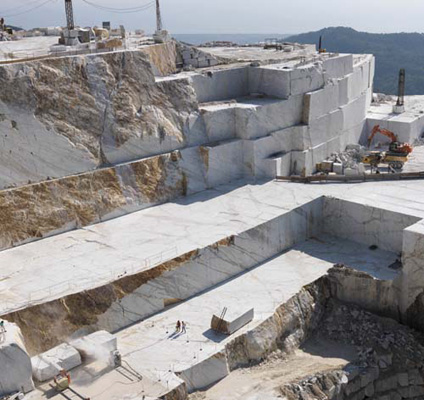 All these areas take the global name of Carrara Marble District, although some of them are objectively at a distance from the Carrara basins sensu stricto.

Having made this important distinction, the innumerable commercial varieties produced in the Apuan Alps area can globally and historically be subdivided into two main groups:

The several commercial marble varieties produced in the Apuan Alps can be divided into seven main commercial types. These types are clearly defined for the entire extension of marble formation all over the Apuan Alps, and are quantitatively and industrially the most important ones. They are:

These seven major types can be furtherly subdivided into many other types due to slight chromatic variations, which are often characteristics of a very restricted area, or just one/two quarry/ies, or even one limited over period of time. Such further subdivisions will not be described here.

Marmo Bianco Carrara (White Carrara marble): also called “Ordinary White”, it is characteristically homogeneous, with a white, pearl-white to grey ground color, shining grains and smoky grey veins which run through the stone rather unregularly. It represents the least expensive and most common type throughout the Carrara sensu stricto basins, but is also produced in the southern Apuan Alps (Versilia area). Despite its Italian adjective (the word "Bianco" means "white") Bianco Carrara is light grey in color and the different value of its main sub-varieties substantially depends on the ground color. Basically, three main sub-varieties can be distinguished, according to the chromatic tone of the groundmass: C, C/D and D. 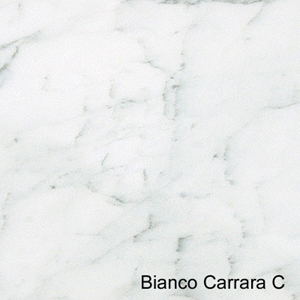 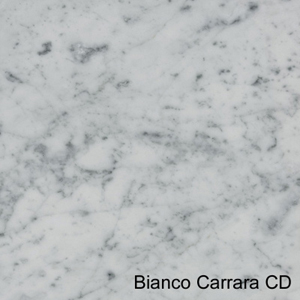 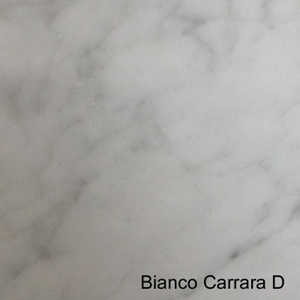 In many places, these varieties are extremely similar (for colour and decoration) to the Marmo Venato and their distinction is not always so obvious.

One particular sub-variety is Bianco “P” (White “P”), a very valuable type and sought-after due to its homogeneous, being veinless and having uniform white colour (“P” = pure).

Marmo Venato (Veined marble): also called “Veined White Carrara”, is the second most excavated marble in the Apuan Alps. This type is a mid-grained, pearl-white to light grey in color, with a fairly regular network of more or less dark grey veins. Density and intensity of the veins are normally slightly higher with respect to White Carrara type. On the whole, this type comprises many sub-types whose aspect and structure range from an unworked breccia to almost regular compositional alternations. 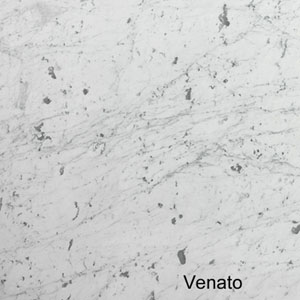 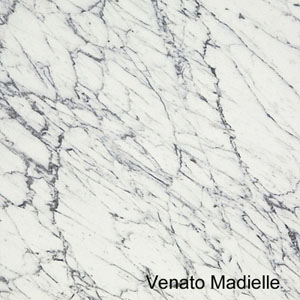 Marmo Bardiglio (Bardiglio marble): this fine-grained variety is characterized by a grey color due to abundant cryptocrystalline pyrite. Several, usually dark grey to blackish, veins are frequent, locally forming a sub-variety known as Veined Bardiglio; dolomitic levels may be present as well. The name of this family comes from a derivation of the Spanish word “pardo”, which is the color dark grey, which also refers to a cloudy sky. Bardiglio varieties are found to a varying extent in all the quarry sites throughout the Apuan Alps. They are globally less esteemed from an aesthetic point of view with respect to the white types, but some varieties have always been highly appreciated, such as “Bardiglio Imperiale”, with an even grey-blue groundmass with no marked veins, and the locally called “Bardiglietto”. 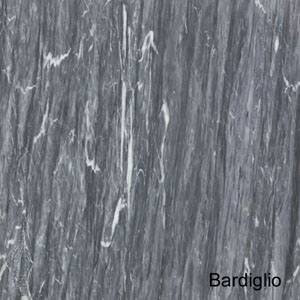 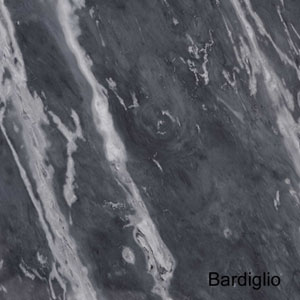 Marmo Nuvolato (“Cloud” like marble): Marmo Nuvolato is a fine to medium-grained variety with a white-grey background crossed by numerous darker shades, light grey to whitish veins, and irregular strips which create elaborated designs. Depending on the cut orientation, the aspect may resemble the typical aspect of some clouds (“cumulus”), a similarity which justifies the “Cloud”-like marble commercial name. Similarly to the Bardiglio, variably diffused cryptocrystalline pyrite is responsible for the variegated greyish-grey color. This variety often includes more homogeneous grey bodies or breccia levels, respectively resembling the Bardiglio and Arabescato types

Marmo Arabescato (“Arabesque”-like marble): “Arabesque”-like variety is a kind of breccia sometimes similar to the Venato type, but with veins that draw real arabesques of different colors on a white-whitish groundmass. The fragments mainly derive from ordinary, veined, Nuvolato and Bardiglio types; the veins may be grey, yellowish, purplish, brownish, and tend to be intertwined. Their arrangement make the different types of Arabescato much more dramatic and varied than the other Carrara marbles. Depending on the cut orientation, the aspect of the Arabescatos may strongly vary, giving the possibility to create really fascinating patterns.

There are not many Arabescato marbles extracted in Carrara’s sensu stricto quarries; these varieties are more typical of the southern part of Apuan Alps area (Versilia area; for example: Arabescato Corchia; Arabescato Faniello; Arabescato Cervaiole) and Garfagnana area (for example.: Arabescato Vagli). 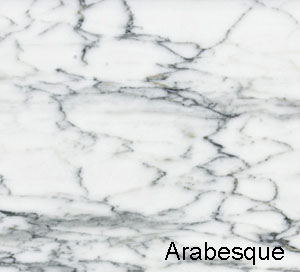 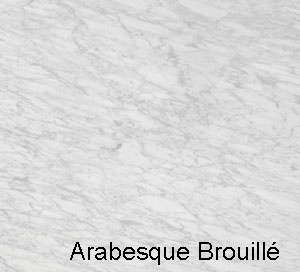 An appreciated sub-variety-the “Brouillé”, quarried exclusively in the Colonnata basin (Gioia area, Carrara sensu stricto basin) - is characterized by the presence of small grey ovulars, named “riccioli” on a white-grey base.

Marmo Statuario/Statuario Venato (Statuary marble/Veined statuary: The Statuario is probably the most precious and famous kind of Carrara marbles. Its unique combination of white-ivory to light yellow-cream color, crystalline structure, purity and chisel “workability” makes it a peculiar material for sculptures and artistic works, although it is obviously used in many other applications. The veins are absent or extremely limited and very light in color (greyish-grey). Locally, an abundant concentration of phyllosilicate minerals (muscovite and chlorite) form widespread, anastomosed, veins giving the Veined Statuary subtype. Veins can also be large and frequent, ranging in color range from gold to gray. The production of statuary is much lower than the ordinary white and is quite limited; this also increases its economic value. 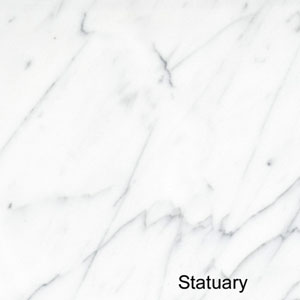 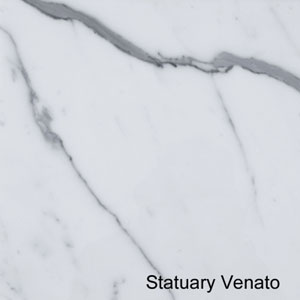 Marmo Calacata (Calacata marble): Calacata marble type is a breccia with very light white-yellowish marble clasts, arranged in muscovite-chlorite rich carbonatic matrix more green and yellow-ochreous coloured than the clasts themselves. Its name derives from the locality Calacata (N of Torano village, Carrara sensu stricto basin), where this variety is mostly exploited. The background color and texture are always those of Statuary, with a few centimeters wide veins that chromatically can vary from light gray to pale yellow-gold (variety "Calacata Macchia Oro" = Goldspotted Calacata; oro = gold), sometimes greenish and brown. 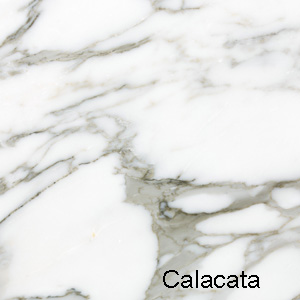 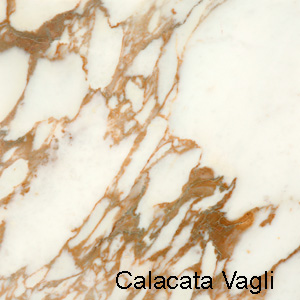 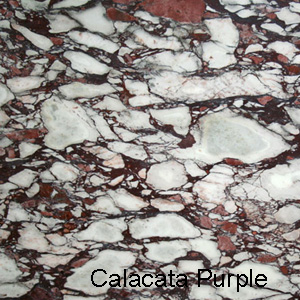 Veining and overall aspect, depending greatly on the cutting orientation, they are sometimes dramatic, giving the Calacata a distinctive pattern which makes it absolutely unmistakable with respect to all the other varieties. Together with the Statuario, it represents another particular precious and valuable kind of marble, rare to be found and excavated only in the Carrara sensu stricto basins. In recent years the artificial stone manufacturers have been copying and flooding the market with imitation Marmo Calacata, perhaps more than any other natural stone.

In the Carrara sensu stricto area three more types can be added to the principal ones, but they are almost worked out or exist in negligible amounts:

Marmo Zebrino (Striped Marble): a variety consisting of dm-thick layers of white-yellowish marbles regularly alternated with thinner grey-greenish beds (enriched in chlorite and muscovite). At places, the levels are deeply mingled, generating a sort of calcschist, which, cut at right angle with respect to its foliation, generates a quite peculiar banded aspect. 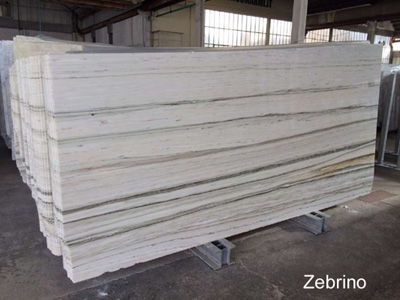 Marmo Paonazzo (Purple-violet Marble): a breccia with clasts chiefly derived from statuary and/or Calacata types, and a characteristic gray-blackish to red-violet matrix. This variety is characterized by a high decorative value, due mainly to its color. Some global changes in its peculiar characteristics define the sub-variety “Paonazzetto”. 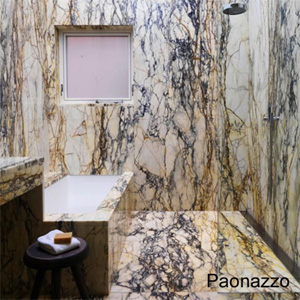 Marmo Cremo (Cremo Marble): the name is linked to the white to yellowish color, resembling the cream (Cremo, a masculine derivation of Crema? cream). At places, the groundmass, homogeneous and very similar to the Statuary, and the overall “delicate” aspect of the stone, light cream-colored, justify the name "Cremo Delicato" (delicato = delicate). This type is very valuable and produced in very limited quantities. 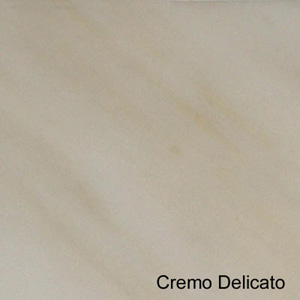 As with any other natural stone, the variations occurring in the Carrara sensu lato marble are almost without solution of continuity. Many additional subtle differences between one type and the others may occur but, once you know what to look for, one should be able to distinguish between a White and a Veined, a Statuary and a Calacata, and so on.

With obvious fluctuations, the production share of the above mentioned marbles would approximately be as follows: 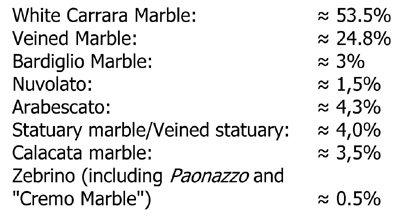 The complement to 100% is given by the BRECCIAS, CIPOLLINI and other (non carbonatic) stones.

The Breccias and the “Cipollini”

Apart from the “Arabescati”, “Calacata Marble” and “Paonazzo (Purple Violet Marble)” pertaining to the MARBLES, we can mention the Seravezza Breccias deriving from a geological formation which belongs to the same succession as the MARBLES sensu stricto, and whose largest outcrops are in the Seravezza inland, southern Apuan Alps. These medium- to coarse-grained breccias are formed by calcitic and minor dolomitic clasts, with highly variable color, due to the presence of many accessory minerals which are responsible of the attractive colors. In the past they were intensely quarried in several places, but now the various levels are almost worked out. The Seravezza Breccias have historically provided magnificent, highly colored slabs widely used in internal ornamentation and construction, playing an important role in the artistic and decorative architectural building. 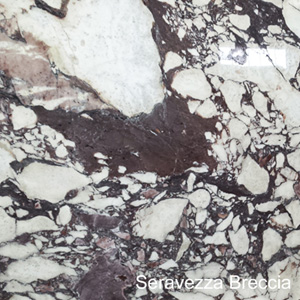 Finally, the particular family of Cipollini, with a name evoking the onion (cipolla = onion, in Italian) for their aspect somewhat similar to this vegetable, and mainly occurring in Garfagnaga area (NW Apuan Alps) and Versilia (South Apuan Alps). 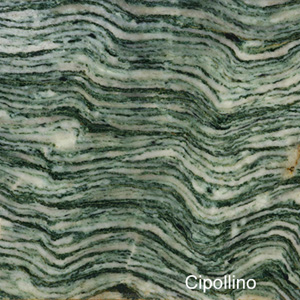 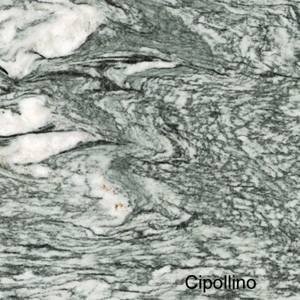 The co-existence among the different minerals generates an astonishing variety of aspects, where rock folding is easily recognizable, and colors range from a “simple” combination white+green, to complex chromatic shadows, green to violet, brown to grey and white. On the cut slabs this pattern results in remarkably diverse drawings and decorations depending on different cut orientations. 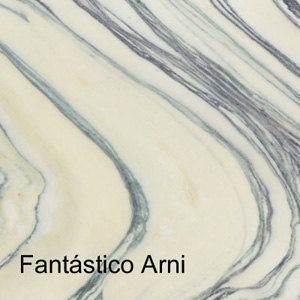 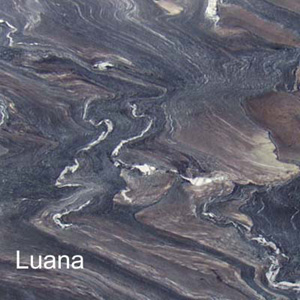 The most classical example of the white+green type is probably the Fantastico Arni from Versilia area; the best example of the other type is the Luana from Garfagnana area.