Is Structural Stone back in the new Stone Age? 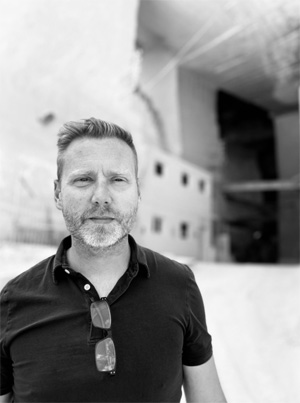 It seems like the construction industry is waking up, slowly shaking off a bad hangover after a half-century of binging on chemicals and seemingly unlimited cheap energy. In the rush to re-build the western world we saw a shift to new ‘’modern’’ materials like concrete & steel which could be cooked up quickly in giant batches and became the current norm for large-scale construction. There was a lot of bang for the buck with these structural materials but it turns out they are much more expensive than ever imagined. The cost is so high, in fact, that the built environment is now responsible for 40% of all greenhouse gas emissions contributing to global warming. Since there is no ‘’Plan B’’, the green building movement cannot be considered just a trend, but absolutely critical in humanity finding a solution to its environmental dilemma.

The bottom line? The energy we burn in the daily operation of our buildings needs to be minimized, as does the embodied carbon created by the materials that go into these buildings in the first place. The good news? Stone has an important role to play in both.

In the stone industry, we have known (literally) forever that stone is the ultimate ‘’green’’ material. But as we all know, over the last four or five decades we have been answering the call to produce less and less of it. In the search for ‘’value-engineering’’ we’ve been asked to make it thinner & lighter, selling less overall volume of material. The result is that stone’s super sustainability credentials end up being totally eclipsed by the other 98% of a building’s carbon-heavy materials like concrete & steel. It’s like recycling a single napkin after you’ve thrown a few hundred pizza boxes into a landfill – good, but it could much better.

There is a growing movement of designers, engineers and builders who are challenging this idea – to not just use stone as decoration, but as the main structural material of their buildings. This is where the greatest impact on sustainability can be made. 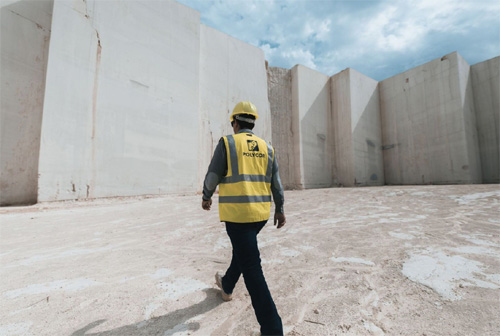 In terms of durability and lifecycle, stone far outlives the 50-year life to which most of our modern buildings are designed…we have more than a few thousand-year-old stone buildings to prove it. The track record (aka ‘’lifecycle’’) of stone is well-established, but the big immediate gains are in terms of its embodied carbon. Stone is a very simple process – extract, cut, and install. Voila! You’ve just saved several times the amount of co2 than if you used the same amount of concrete & steel to accomplish the same thing. In fact, when you think about it, making concrete is pretty absurd. You start with a piece of limestone, use a bunch of energy to crush it and burn it, use more energy to batch it and mix it, and when all of those processes are complete you end up with something that has less than half the strength of what you started with.  Wait… what?

Architect Amin Taha & his firm Groupwork realized that this just doesn’t add up. With some careful planning, an audacious design, and a fearlessness to challenge the status quo he and his team were able to go back to first principals and build a contemporary 6-story structure whose load-bearing superstructure is made from natural stone. With close integration between engineers (Webb Yates) and the installers (The Stonemasonry Company Ltd.), the result was 15 Clerkenwell Close, completed in 2018. Considered to be one of the most controversial projects in London because of its bold use of massive quarry-cut limestone blocks, one might argue that the most controversial thing about it is the fact that by NOT using concrete & steel for its structure they were able to save 92% of the embodied carbon.  Since the stone serves as both structure and finish, the savings add up everywhere: materials, labour, schedule (curing times), managing multiple trades, engineering time & all associated costs. The design and implementation saved a massive amount of carbon, saved time, and as it turns out, it also saved money…all thanks to the natural stone that’s holding it up.

Taha and his collaborators are not alone in this quest. A growing number of architects & engineers are designing with stone as a main structural element. These include Gilles Perraudin, Renzo Piano Workshop, Carl Fredrik Svenstedt, Christophe Aubertin & Studio Lada, Eric Parry, Barrault & Prossacco  – and the list continues to grow. These designers see a future of building simply and with low-carbon materials, but they are also not afraid to add modern engineering techniques and forward-looking design. Some are taking this logic to its ultimate next step – why not a 30-storey tower in stone? Why not use post-tensioned stone beams, columns and floor slabs as we would use concrete today? The question is being asked: why can’t we use the tried and true stone masonry techniques that built cathedrals, bridges and temples of antiquity alongside all the other cutting-edge technologies like computational modelling and modern mechanical engineering at our disposal today? The simple answer is they can, and they are.

Kilogram for kilogram, a medium-density dimensional limestone – the kind you need to hold up a multi-story building - produces about .075kg of co2/kg while typical concrete is twice that at 0.15kg, and steel a whopping 2.8kg. This means replacing structural elements of a building with stone will have a significant impact on its sustainability – but the savings don’t stop there. Masonry buildings have something called thermal mass. Thermal mass is what makes Mediterranean homes stay cool throughout a hot summer day…stone offers a resistance to even extreme temperature fluctuations and acts as a passive cooling and heating system by the nature of its own structural mass. If used properly these same thermal properties can contribute to dramatic, long-term energy savings in modern buildings that use this kind of passive system. One study conducted by Arup in the UK determined thermal mass of a masonry building can offer 25-50% in operation energy savings compared to a typical air-conditioned office of current ‘’light’’ construction – that’s a lot of money and a lot of carbon saved. Similar operational savings were put forth in a DNV study in Frankfurt which compared data from a natural stone façade and a glass façade - a difference of almost 70% more cost were found to operate a glass-façade office tower compared to one clad in natural stone.  It makes sense, you need to crank up the air-conditioning if you are going to keep an air-tight greenhouse comfortable for its occupants behind glass. That same study showed that the global warming potential of the two different facades is also staggering- with the glass façade a full 250% higher than stone in that regard.

So stone has way less embodied energy and makes buildings more energy-efficient over the long term?  Are we sitting on the holy grail of the building products industry? Well, maybe… but like most things nothing is that easy. The first step is not only to be green, but to prove it. That means making & paying for EPDs (Environmental Product Declarations) and other third-party environmental certifications like the ANSI/NSI 373 environmental certifications which serve as benchmarks to declare the sustainability of the stone products we produce. This is our only way to show designers and builders the true impact (or lack thereof) of stone by putting it in writing and having it verified by a third party – from there is can be used by green building programs like LEED, BREEAM, Living Building Challenge and others the like. It’s almost crazy to have to show these credentials when it seems so obvious to those of who spend our lives in quarries – this certification is time-consuming & expensive - but without it, stone will stay relegated as a decorative finish or an obscure niche building material used by a few stubborn earth-building believers.

In addition to EPDs and environmental certifications the stone industry will also need to step up its game in other ways to serve this new market of structural stone builders. Quality assurance – a set of standards, grading & testing methods will need to be adopted to maintain consistency and quality. Wood has achieved this, it’s just a question of stone developing its own standards as well.  We’ll also need to give our young designers and engineers some know-how, a place to get started. That could be as simple as dusting off the old masonry handbooks and bringing them into the 21st Century, but also in teaming up with classically-trained stone masons as well as modern engineers to bridge the gap between old and new to bring us all together into the modern age. Maybe the toughest challenge will be to get stone back into the building codes – this demands research & engineering, but has its own set of political implications and risk of being derailed by much larger industrial lobbies. The wood industry is at least 15 years ahead of stone in this process and has already fought many battles to get where it is, but much can be learned from their efforts.

There is a case to be made that stone is about to come back into its own – it comes down to its simplicity and abundance. Back to basics in many ways, but kind of revolutionary in terms of what it would take to bring it back as a structural material in today’s construction market. For the stone industry the implications could be big - material which has been forgotten because it is no longer ‘’in fashion’’ could suddenly come back in style not because of how it looks, but because of how it performs. Valuing the structural capacity of stone again requires a totally different mindset on how we quarry and process stone – but all the tools and know-how already exist, it’s just a question of adapting them to a new purpose. A change in this direction would bring with it new exciting opportunities: a chance to develop new standards in manufacturing, to contribute to new norms and building codes, and to find new ways to industrialize the process. All of these efforts, hand-in-hand with the designers who are developing these green structures and the stonemasons who put them together, will serve to continually improve the stone supply and make it more financially accessible – a cycle which will continue to benefit the stone industry as a whole.