The Andalusian Businessmen's Association (AEMA) recognises every year the work carried out by companies, people and institutions in favour of the marble industry through the Macael Awards, awards that this year 2022 celebrate their XXXV edition. The awards gala was held on 11 November 2022, under the presidency of the King and Queen of Spain, who presented all the prizes.

Restoration of the Church of the Holy Martyrs Ciriaco and Paula, in Malaga. This church was founded in 1491 by the Catholic Monarchs and completed in its current configuration in the 18th century, becoming the best example of the Baroque style.

The Almeria-based company MÁRMOLES GUTIÉRREZ MENA has been in charge of supplying and manufacturing the stone. Among the various elements that have been integrated to improve the church is the installation of a new flooring, in the form of a central carpet, reproducing the original 18th century design, in Negro Marquina, Rojo España and Blanco Macael marble, for the different chapels and altarpieces, with borders around the perimeter of the church. It has also carried out the custom-made cladding of moulded marble plinths inspired by existing designs, forming an interior air chamber for proper ventilation and prevention of damp, in red and black marble both on walls and on straight and curved pillars in the central nave, chapels and altarpieces. Other outstanding elements of this renovation have been the marble staircases in special pieces of black and red marble, and the cladding of the front of the High Altar with onyx stone and red marble. 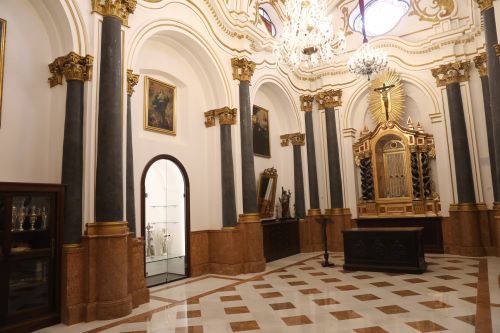 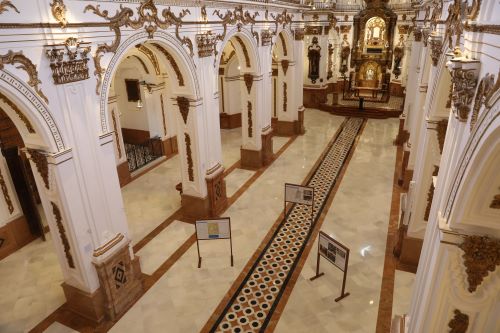 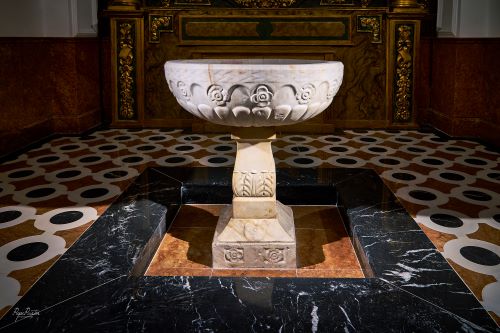 Located in Dallas, USA, it includes numerous elements in Teoga stone, of which 150 m3 have been used in the Marble District, and a large quantity of rustic stone from Texas. Among the ornamental pieces on the exterior of this residential project are columns, window surrounds, curved and straight doors, balustrades, cladding and cornices made up of three moulded levels. 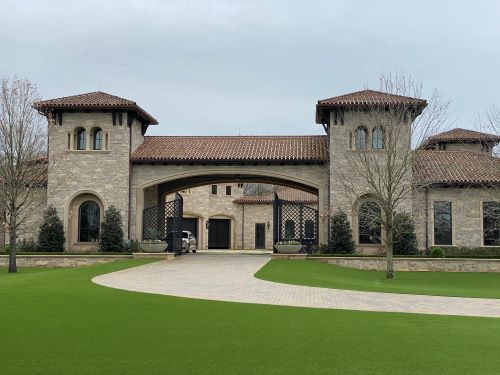 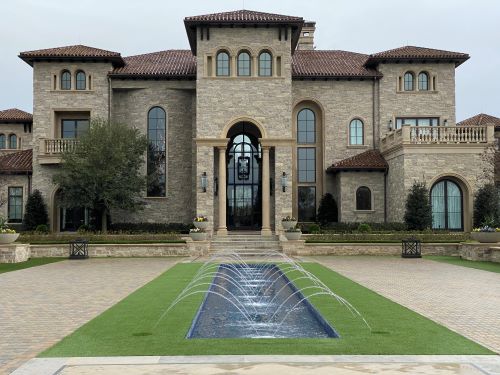 Of traditional oriental architecture, it houses 100 columns in national limestone, the same material used for the building's four main entrances. It is the sixth temple of this type in the world, and the largest of the three in Europe within this religious current. 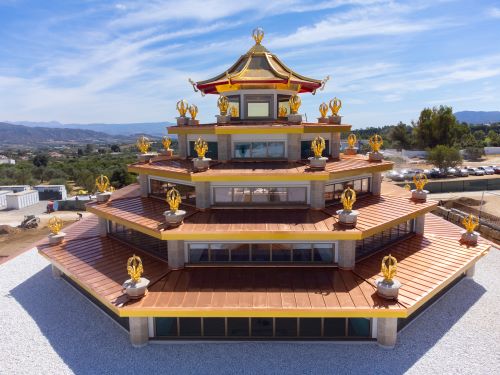 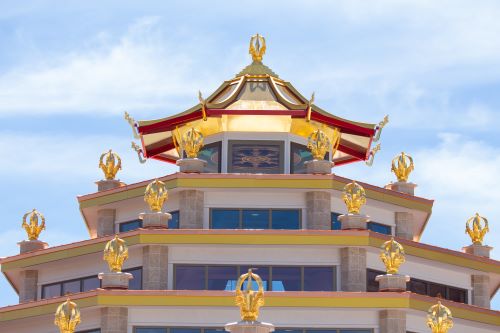 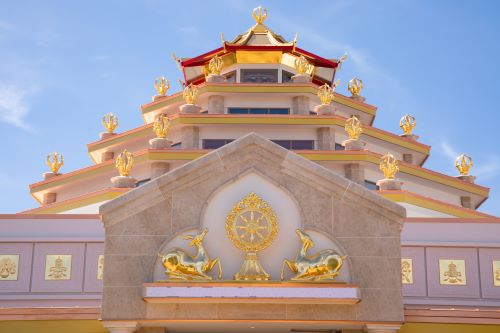 For the renovation project of Plaza de la Reina, located in the Km 0 of Valencia, where the cathedral is located. 12,000 m2 of Almería and Teruel travertine have been used for the paving of the space. The street furniture, consisting of curved and straight benches, planters, pedestals and commemorative plaques, has been made exclusively with travertine from Almería. 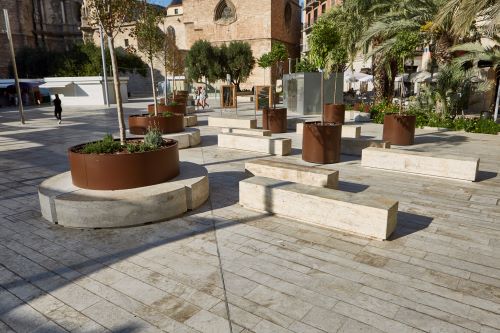 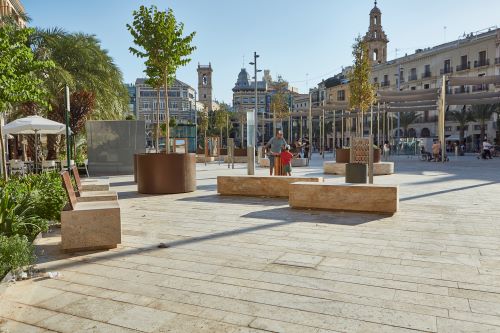 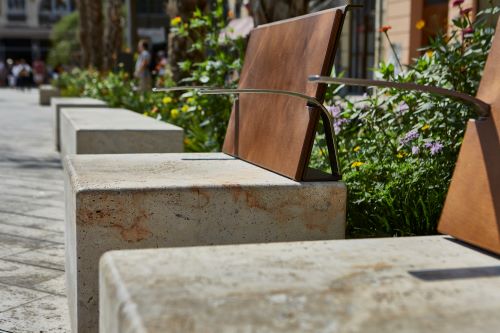 Private residence VILLARICOTTA II, located in Marbella (Málaga). Built with 5,000 m2 of Paloma stone for cladding and flooring, and 200 m3 of solid material sculpted in columns, capitals, bases, cornices and other decorative elements.

The 22 columns stand out (14 with Corinthian capitals and 8 with Ionic capitals), up to 8 metres high, whose shafts have been made in a single piece of almost 6 metres.

The entire façade follows a Renaissance order, both in the columns and the coffered ceilings, which include carved coffers and solid door and window openings. For the interiors, in different materials and colours, the waterjet technique has been used for soffits, borders in lobbies and bathrooms. 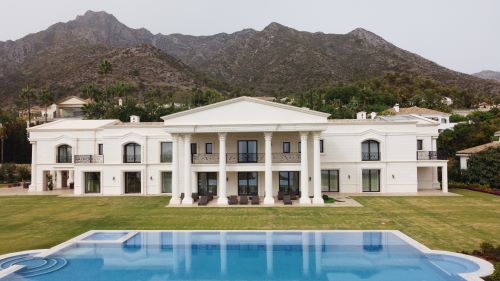 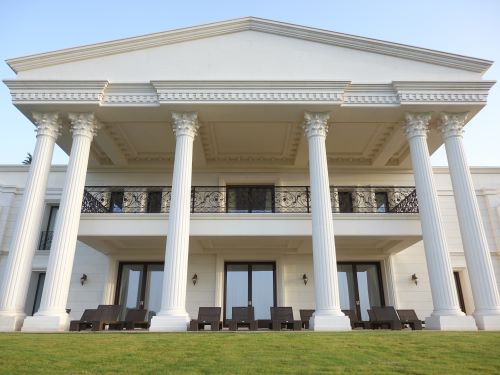 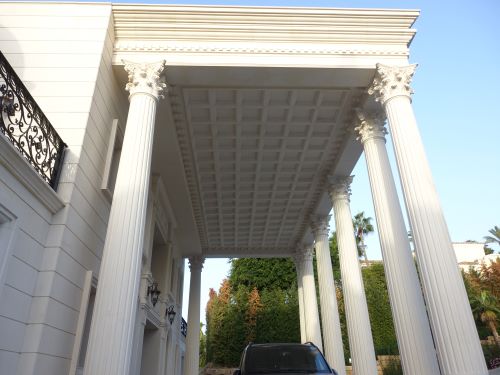 AWARD TO THE PERSON: Luis Escarcena, architect; for the renovation and remodelling project of the Hotel Silken el Pilar Andalucía and Plaza de las Flores, both located in the town centre of Estepona, Malaga.

EXCELLENCE AWARD: Estudio de Arquitectura Tobal Arquitectos, from Marbella (Malaga), for its strong commitment, strong links and loyalty in the use of natural stone in its projects.