Exports and imports of natural stone in Brazil - 2018

Brazil exported ornamental rocks to 120 countries in 2018, the three main destinations being USA, China and Italy. Just in these 7 countries (USA, China, Italy, Mexico, Canada, United Kingdom and Spain) the exports amounted to 10 US$ million each. 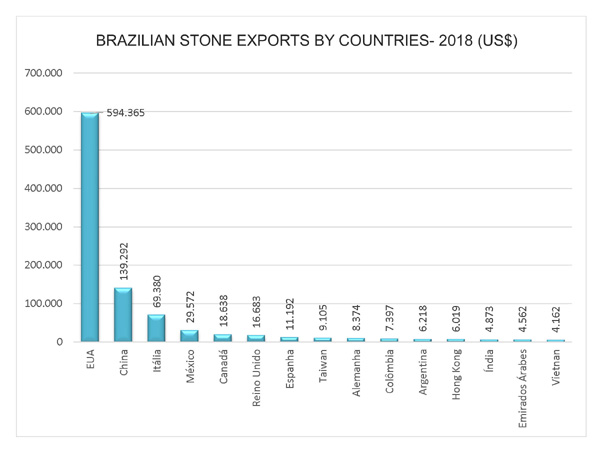 The lower average sales prices were for China (170 dollars/ton) and Taiwan (160 dollars/ton), because they were mostly blocks, and the highest were for Canada (1010 dollars/ton) and Vietnam (870 dollars/ton). Sales to Italy were diversified, included both blocks and granite and marble slabs, apart from slate and quartzite. Sales of slate are more concentrated on the US and UK markets.

The exports of ornamental rocks came from 16 Brazilian states in 2018. Espiritu Santo, Minas Gerais, Ceara and Bahia accounted for turnover of more than 10 US$ million each of exports. Espiritu Santo alone accounts for 79.7% of total turnover and 71.5% in volume, followed by Minas Gerais,which representes, 12.2% and 16.7% of total Brazilian exports. The state of Ceara exported US$ 28.1 million and 39.800 tons, showing a trend towards growth.

Among the countries of origin of natural stone imported by Brazil, one can highlight, by volume, Italy, Spain, Turkey, Indonesia, China, Portugal and Greece, in this order.