One of the most famous examples of Art Nouveau church architecture in Europe called «Am Steinhof» (literally: at the stone yard), a work of Otto Wagner (1841-1918), internationally renowned Austrian architect, is presently being restored in Vienna, the Austrian capital. Among other works, the entire facade, consisting of more than 2000 square meter of white Carrara marble slabs, had to be replaced over the last two years.

The building is considered to be Wagner’s main work. Built for the Niederoesterreich (Lower Austrian) Provincial Institution and Sanatorium, it occupies a very commanding position. Some 15 km west of the city center, it is located at the highest point and in the axes of a large park in the Vienna woods. Its majestic gleaming dome, covered by guilded copper plates, can be seen from many high vantage points in the city. 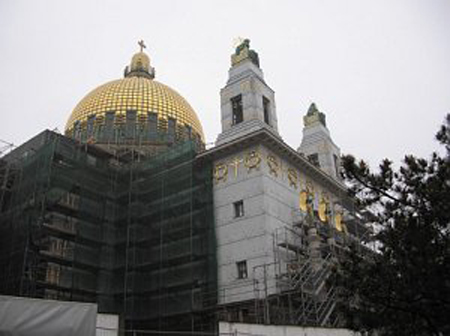 Although the church’s structure is made of brick, the building is clad with slabs of white Carrara marble (Bianco Carrara). The 2 cm thick slabs are fastened by marble bands (Friesplatten) of the same material, each of them mortared and additionally anchored to the brick work by metal bolts with copper tops.

The Carrara marble originally used for the facade was of an outstanding quality, which is proved alone by the fact that the plates provided their service for almost a century. However, over the years, as known from other buildings clad with marble e.g. the Finnlandia Hall in Helsinki, a significant number of slabs developed buckling of up to 4 cm as well as cracks due to temperature changes and other influences, since some slabs were in danger of falling down, it was decided to replace the entire marble covering. 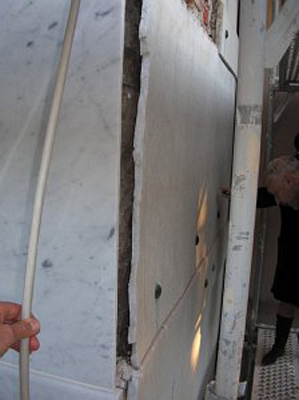 The old slabs, therefore, were removed and replaced by new ones of the same marble quality. For building construction historical reasons, the entire structure method was maintained, one exception being the anchor. The formerly bolted anchors were replaced by screwed ones, providing the possibility, that in future defective plates could be dismantled and replaced easily by new ones. The marble slabs are 74 cm in width and 115 cm in height. The marble bands are 30 cm high and 148 cm broad; the latter are fastened by two screwing anchors in the brick-work. The slab’s surface is polished.

Stone work started in early 2004. Slabs, ready to be installed on the building site, were manufactured and supplied by the Carrara company Escom. Costs for the entire church restoration amount to about 11.3 million Euro; of which1.2 millions € was allotted for the stone mason works. In the meantime these are terminated completely since June 2005. After further restoration work on the inside, the church will go in service again in 2006.

According to Franz Aufhauser, stone-mason master of Vienna, whose company was in charge of the natural stone facade renewal, the job was very fastidious and demanding. In particular, a lot of time was required to select the marble material. Selection usually took place in cooperation with representatives of the Austrian office for federal monuments (Denkmalpflegeamt). A high material uniformity was demanded. In order to reach this, careful selection was required when quarrying the marble. And despite very careful selection it occurred that more than once, the already assembled slabs had to be dismantled again later, because the colour or texture differences to the neighbouring plates were regarded by the Denkmalamt as being too distinctive.