A unique stone project: replica of the marquee of Metro in Madrid designed by Antonio Palacios

In the beginning of the XX century, the architect and urban planner Antonio de Palacios (1874-1945), responsible for many of the emblematic buildings in Madrid, designed the marquee of the subway in Gran Vía, Madrid. Decades later, it was shifted to Galicia, now a replica once again occupies this emblematic area of the capital of Spain. This work has been made by Grupo Godoy Maceira and constitutes an elaborate and delicate project which required a milimetric precision in production and installation. 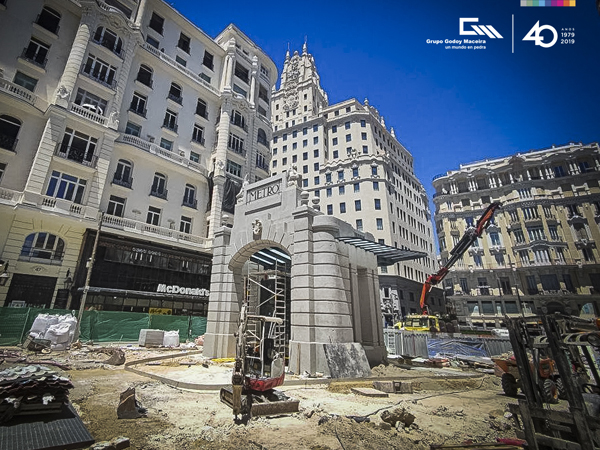 Installation of the replica of the marquee in Gran Via, Madrid

This marquee consisted of the first lift for going down to the subway of the capital, but in the beginning of the seventies was shifted to Porriño. The metro of Madrid wanted to bring it back but the Galician council refused to let it go, therefore Madrid decided to make an exact réplica. And a company from Porriño, Godoy Maceira, was chosen to implement the project. "It is a different type of project, and complicated, both in ejecution as well as repercussion", says the Director of the company, Fernando Godoy. 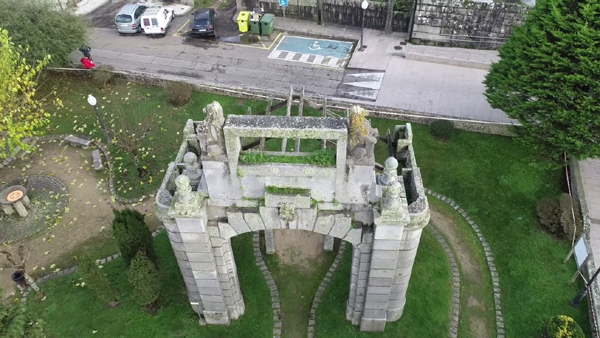 View from a drone of the original templete, located in Porriño (Spain).

The model used was of the original marquee that is now conserve in the native town of Antonio Palacios, Porriño, and where the company, Godoy Maceira, is located. The original marquee was studied in great detail, even a drone was flown in the surrounding área " just to see if there was any detail that had been misses, searching for the most trustworthy réplica possible. The existing documentations in the Madrid municipality were also revised. "Metro insisted very much that an exact copy had to be made", Fernando remembers.

Once the measurements were made, the granite had to be cut and some parts of the templete strengthened, as a result of the calculations, of the weight of the glass, the forging and taking into account the spectacular structure of the facing, this marquee-visor characteristic of the whole project, that were supplied another company in Porriño, Dizmar. One also had to take into account that the structure needed to withstand acts of vandalism, something that Palacios did not have to worry about a century ago. "  One had to take into account certain things that were not considered in those days"  says Fernando. 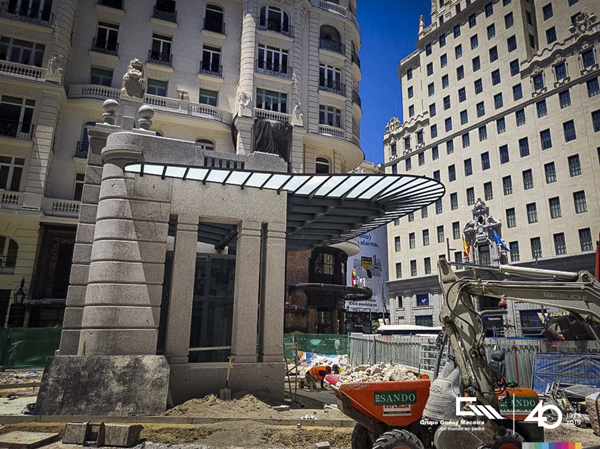 The grey granite alba comes from a quarry in A  Cañiza: " it is the stone that was considered most similar in colour and texture to the original with which Palacios built the Templete",  as Fernando says.

Every detail of the replica has been taken care of, even for sculpting the lions that crown the structure, originally made of cement, but now reproduced in granite. These are the two lions, sculpted by hand out of a solid block of granite, 1.6 metres height and 2 tons weight each, starting from a mould of sand and from photographs and videos of the original marquee. Even the lettering of the "Metro" has been reproduced, elaborated in natural stone with the letters and lines also inlaid in granite. 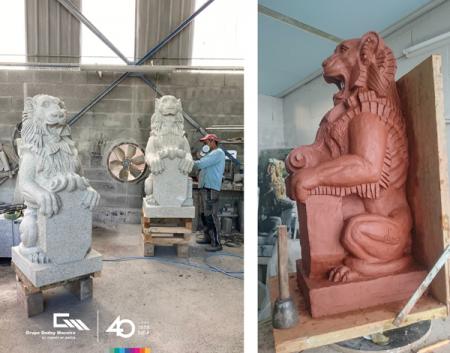 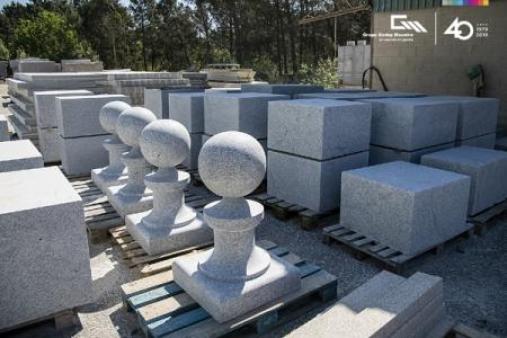 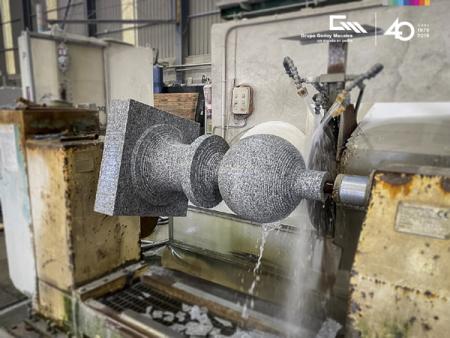 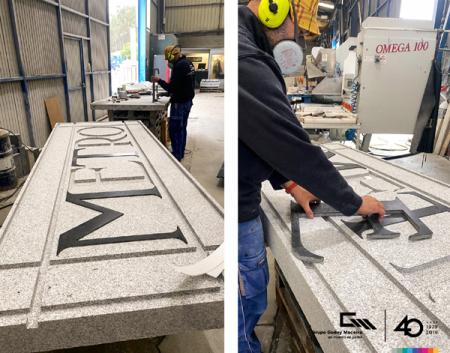 When studying the project, the company was surprised at how a century ago Antonio Palacios and his team were capable of executing a project that " is very complicated to do nowadays with all the existing machinery. There are details such as the arch which are incredible, with complicated pieces. There are pieces which weigh 6 tons such as the two in the base and another two of the archade". 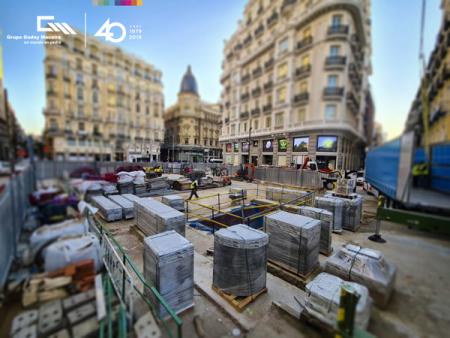 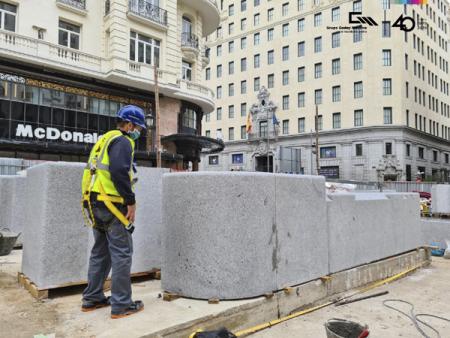 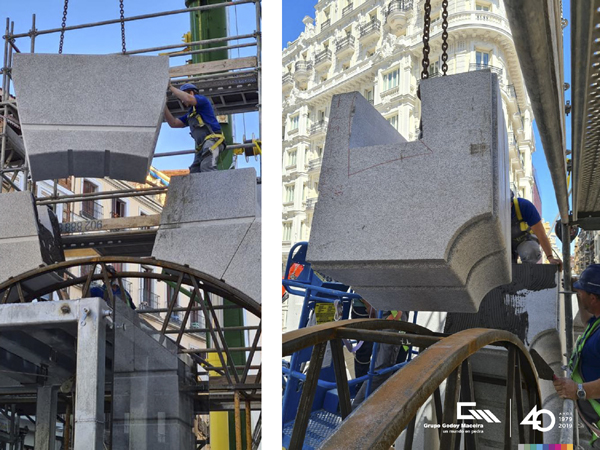 Installation of the archs

In total the marquee has measurements of 8.50 m width and 5 20 metres length and 10 metres height and there are 66 m3 of stone. The beautiful glass and steel canopy, which Palacios designed to welcome passersby at the entrance to the metro on Gran Vía, reaches approx. the 11x11 m. and the 6 tons of weight, rising about 5 m. on the floor. 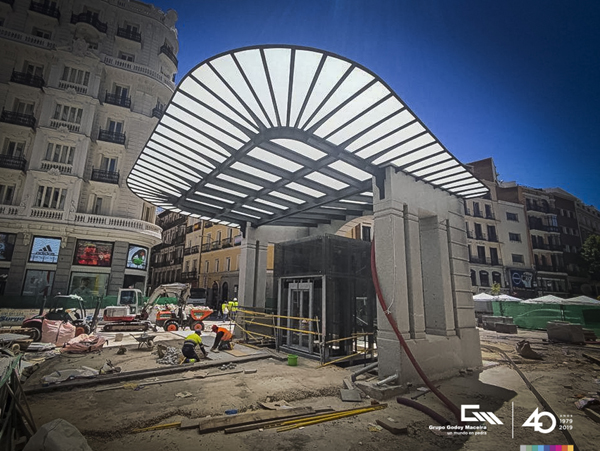 The company Godoy Maceira was created in 1979, The company is specialised in rehabilitation of historical buildings, and has participated in the restoration of the Cathedral of Santiago de Compostela, in the terminal T4 of Madrid and several projects in Europe and USA.