UK remembers the victims of 9/11

A memorial garden to all the victims of 9/11 opens in London in September 2003. It will provide a focus for the grief of 63 UK families, many of whom have no grave or headstone to visit since the bodies of their loved ones, and those of most of the 3000 killed, have never been recovered.

On the second anniversary of the 9/11 terrorist attacks in America, a memorial garden to the victims was opened by Princess Anne in Grosvenor Square, London. It is believed to be the first permanent memorial of that terrible event outside the USA and its cost -- £500,000 (Euros 714,500) -- has been paid by the UK Government. 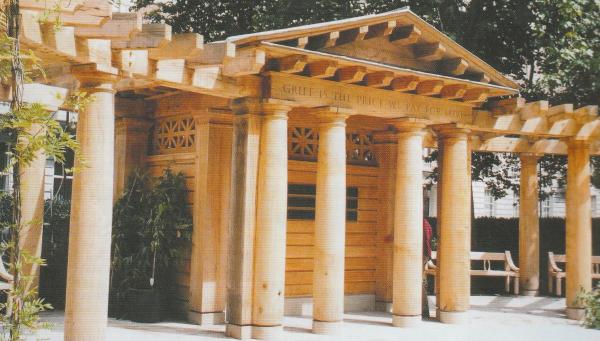 Fittingly, the materials chosen are of the highest quality with longevity a key criterion in the specification process. Two British sandstones (Crossland Hill and Woodhead), green oak, bronze and steel have been brought together to achieve a lifespan of 600 years. The planting, too, has been chosen with great care and imagination. Set out informally, the plant beds will provide scent and colour throughout the year but with a special focus on mid-September to mark the anniversary.

The result is an appropriately dignified and tasteful memorial, beautifully crafted by specialists. An oak pergola frames the rear half of the elliptical garden and at its centre is an oak pavilion, designed in the form of a small classical temple. The front elevation of the pavilion holds three bronze plaques bearing the names of those from the UK, UK Overseas Territories, and dual nationalities, who lost their lives.

All 20 of the pergola's columns, and the pavilion itself, are supported by Crossland Hill sandstone bases, supplied and worked Johnsons Wellfield Quarries.

Beneath the pergola, extending into a central area and up to the entrance gates, is 130 m2 of 38 mm thick Woodhead paving with a sawn finish in widths of 450 mm and in random lengths of between 450 mm and 900 mm.

Some 5.000 100m3 cobbles of Woodhead laid on 50mm bedding make up both a dished channel of edging around the paving area and a mowing trim on either side of a 390mm high stone railing plinth (also cut from Woodhead). In addition, the cobbles form a detail around a large centrepiece stone plaque set in the paving.

The designer of the memorial, architect Aileen Shackell of Land Use Consultants, says there was never any debate about whether or not to use natural stone. "The Government wanted to create something really beautiful and high-quality for the bereaved UK families. In meetings we discussed how this memorial should still be standing in 600 years time and when you talk of such longevity there is only one choice: natural stone. The relatively high initial cost of the scheme could then be shown to be supplying best value for money over a long period. So the only debate was about which stone to use." Yorkstone, the collective terms for the hard sandstone quarried in the north of England, won because of its strength.

Christian Marshall Ltd, the stone contractors, were on site for three months. It was not a straightforward paving contract because there is a domed effect across the centre of the paved area.

"There was a distinct 'hump'", says the company's director Christian Marshall. "This took some sorting out. The paving slabs were supplied as flat stone which we had to lay to a complicated set of falls in the level. Effectively, we were laying stone against our natural principles because it wasn't flat. Then we had to grind the lips off the paving to form the domed effect. It was quite a task and explains the three month timescale for what is really quite a small area of paving."

Marshall describes the contract period as extremely tight and this has been acknowledged by everyone involved in the project. The Government minister responsible, Tessa Jowell, approved the scheme in August 2002 and work needed to be completed by June 2003 to allow for planting. This was a project that could not overrun.
Delivery was, therefore, critical. What is more, because the site is so small, there was no space for all the contractors to be working at the same time. Supplies and suppliers had to appear when the programme said they should be there. No element could slip.

These issues, and the high profile nature of the project, brought considerable pressures to all those involved. Architect Aileen Shackell felt it, too. "Everyone felt strange to be working on a project that was so high profile and would be so stared at. It certainly concentrated the mind. But it was a good project to work on. The families are the real clients and it means a lot to the them."

Richard Kindersley, one of the UK's foremost lettercutters, designed both the three-part bronze memorial to the UK victims and the sandstone paving plaque dedicated to all the victims of 9/11. The Yorkstone plaque is set into the centre of the paved area above a resin-encased section of steel girder from World Trade Center One. Cut from 75 mm thick Crossland Hill sandstone, it is elliptical, 1429 mm long and 1795 mm wide, and slightly domed. There were initially some concerns from Johnsons Wellfield Quarries that such a large piece might not be available but these proved unfounded.

For Kindersley, the stone element of his part of the job went smoothly once a sufficiently large piece of Crossland Hill was found. But he found the design of the bronze panels rather more worrying. "I particularly wanted to avoid a list, a war memorial list, as it were, so I reduced all the names to a texture, with deep reliefs. I chose Palatino, a typeface designed by Herman Zapf. It's modern yet with a legacy of classical or renaissance fonts.

"I presented a drawing of my design, and explained the thinking behind it, to a representative group of the relatives and that moment was very tense. Fortunately, they liked it immediately."