One stone variety from Turkey is especially popular in the international markets: Travertine. Turkish travertine comes in different varieties and is similar to the travertine found in Tivoli, near Rome, Italy as well as the variety available in Iran .Turkey, as more and more people are discovering all the time, has vast resources and great variety in natural stone, with deposits spread all over the geographically big country. The development of the natural stone industry during the last two decades has been parallel to the country’s fast economic development and now many companies are supplying a large variety of stones in the international markets.

Travertine has been used in Turkey throughout its long history. In almost all the Roman settlements inside Turkey, Travertine was widely used in different applications. Cities like Hierapolis, near Denizli, were built completely with Travertine. The Roman engineers often used local building materials in their constructions and Travertine became a common building material. In the modern age, hundreds, if not thousands, of projects have been done using Travertine.

Characteristics and applications of Turkish travertine

Travertine is different from limestone as there are significant differences both in texture and molecular structure. Limestone tends to be softer as compared to travertine. Travertine has holes, which is rare in limestone. Travertine can be produced both in vein cut and cross cut, which means that visually they can be very different stones. As a stone that contains natural holes it is strongly recommended that travertine be used in the filled format. After installation an appropriate chemical is frequently used to seal the surface.

Most applications of Travertine from Turkey have focused on walls and floor tilings, and both for interiors as well as exteriors. 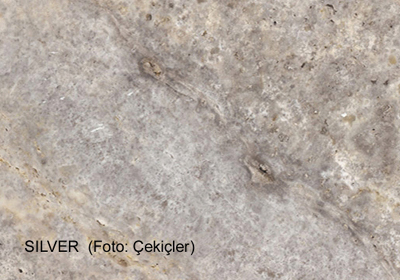 Most quarries are located in Denizli in the centre of the country, where there may be as many as 50% of the travertine quarries in the country. But there are also quarries located in other parts of the vast country in place such as Eskisehir and Afyon in the centre, Konya, Sivas in the northeast, Elazig and Erzurum in the eastern part, and some more scattered all over Turkey.

In the Chinese market the preference is for Medium, Classic and Light Travertine. Red Travertine is mostly sold in the United States. Silver variety is more popular in India.

During the nineties, the American DIY and the retail industry discovered Turkish travertine, and it became popular in the southern part of USA, especially California. Instead of being presented in the traditional vein cut version as in European markets, the Americans went for the cheaper crosscut version. Thus, from being a premium product, Turkish travertine became a cheaper, mass product with the price having dropped to almost half of vein cut variety. The lower price ignited a huge demand for the product and travertine became the bread and butter of the American natural stone industry. In general, the US market prefers the Light and Noche colours. Red travertine is also mostly sold in the United States.

The crosscut variety of travertine slowly became popular in the United Kingdom. However, in the South European markets, the preference for vein-cut travertine continues. With China and India now growing economically fast, demand in these two countries has also taken off. In both these countries, the vein-cut variety is more popular. In China, however, the preference is for Medium, Classic and Light Travertine colours. In India, the Silver variety sells more. In the Middle East both the vein-cut and crosscut versions are popular.

With the building industry now growing fast in so many emerging markets it will be interesting to see how demand for Turkish travertine develops in the new markets and what varieties become popular where. An interesting period for the industry lies ahead.

This article has been written in collaboration with many people. Our thanks to Mr. Levent Mertsoy, Mr. Ali Sayakci, Mr. Metin Cecik, Mr. Kömürcüoglu for their comments and permission to use photos.