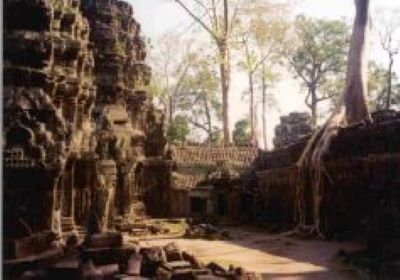 In the north-east of Cambodia, 300 km from its capital Phnom Penh, can be found the capital of the ancient Khmer empire, Angkor. Hidden during centuries in the middle of the jungle, it was totally isolated from the rest of the world until the year 1860 when French missionaries discovered it.

The origin of this city is placed in the reign of Jayavarman ll. (810-850 AD), founder of the Khmer Empire, who initiated the cult of the Hindu deities, and the splendour lasted till approximately the year 1225. The architectural complex, which occupies an extension of 400 km2, is composed of monumental temples built during this period and are a jewel of Indian art. In 1992 the UNESCO named the entire monumental complex of Angkor as forming the Patrimony of Mankind. 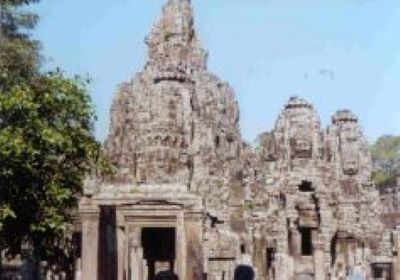 The main temples temple groups are Angkor Thom, Ta Prom and Angkor Wat. The oldest ones were built with bricks, in the subsequent ones laterite was used, a coloured mud stone, and the most recent are of sandstone.

What is most striking about the Temple of Ta Prom, the only one that has not been restored, is that nature has been gaining territory and the trees, their enormous roots have invaded the monuments, forming a part of the sculpture complex. In Angkor Thom the temple Bayon is found, which was built in the X11 century under the reign of Jayavarman V11, it has a moat of 100 metres depth and an extension of 12 km, which protected a population of around one million persons.

Its tower of 45 m height is crowned by four enormous sculpted heads and surrounded by 54 minor towers, each of them with four smiling heads that, supposedly, represent the king himself. 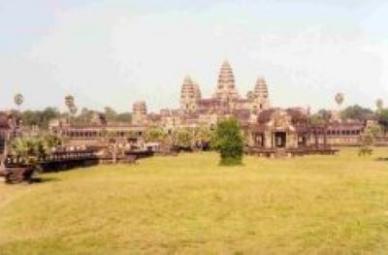 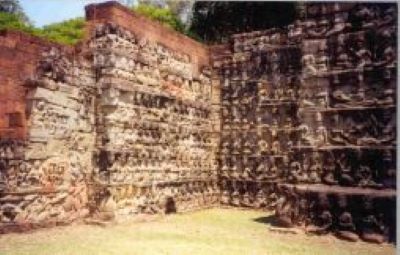 The most representative temple of the entire complex is the so called Angkor Wat, dedicated to the Hindu God Vishnu, ordered to be built by the king Suryavarnam II, who reigned between the years 1131 and 1150 AD It is calculated that for the construction of this temple the same quantity of stone was used as for the construction of the big Egyptian pyramid of Cheops, in Gizeh. Thirty years were needed for the construction. This temple is oriented towards the West, contrary to the other temples, which are oriented towards the East. Five towers of perfect symmetry that represent the five hills of the mountain Meru, the house of the gods and the centre of the Hindu universe form it. A moat and three galleries surround the five central sanctuaries. It has the biggest relieves of the world, which narrate histories from the Hindu mythology. The whole complex occupies two square kilometres and is the biggest religious temple in the world.

The sculptures of the temple of Angkor Wat are in good condition since, after the decline of the ancient Khmer Empire, it became a Buddhist temple and was continuously maintained, which has helped in the conservation, contrary to the other temples of Angkor. What it has not escaped, as is also case of the great majority of monuments in the east, has been from plunder and pillage. Even the torsos of the relieves have been taken away, as can be seen in the images. 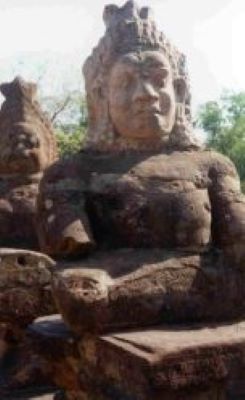 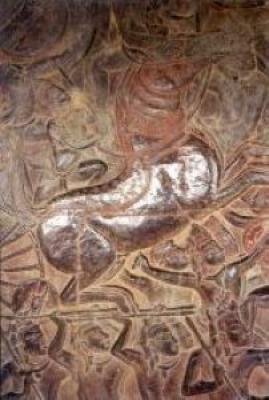 The history of Angkor Wat goes back to the second century after Christ, an epoch in which the reign of Funan, of Indian origin, was established. Indian traders settled in the area and during four centuries there was an age of prosperity and tranquillity. The site being located in the transit area between China and India, Hinduism and Chinese Buddhism influenced the habitants, which are reflected in their temples, bringing to mind those of the North of India and Nepal.

The reign of Funan fell in the year 600 against the reign of Chenla, ending commerce with India and the empire from Indonesia came to power. In the year 800 the reign of Kambuja was established, the head of which was Jayavarman I, who built several towns close to Angkor Wat, he was responsible for many social changes and increased his empire towards the north and the east. During centuries Kambuja lived a period of prosperity.

The King Suryavarnam, in the year 1000 planned the construction of the city of Angkor, a task continued by his successor, Udayadityavarnam II, who restored several temples and under whose reign Angkor became at the same time a sacred city and the centre of a vast irrigation system. The expansion lasted two more centuries, a period in which the temple of Angkor Wat was built. But in the beginning of the year 1200 the empires of Khmer and Angkor began to decay. The Thai empire emerged as the most powerful of the area and the conquests of the Khmer empire by the Thai empire lead to the definite abandoning of the city of Angkor. The forest became the master during centuries of many of these temples.

Since the year 1908 the Conservatory of Angkor is responsible for the maintenance of the temples, depending on the Government of Cambodia. The civil war that lasted 30 years till the seventies, in which the Khmer Rouge massacred many Buddhists as a part of the social reorganisation, did not do much damage to the temples, several temples were moved to museums for their protection.

The temples currently are being restored with the collaboration of archaeologists from all over the world. But the world can today marvel once again at this masterpiece of stone, and among the ruins contemplate the passage of time and so much history and bygone eras.