Stone Inside: Innovations for a Better Climate

For quite a long time fibre reinforced natural stone has been offered for kitchen tops, elevator covering or noble bathrooms. However, the latest developments of the Munich company TechnoCarbon expand these ranges of application and will grant natural stone new importance as an environmentally-friendly construction material.

The development of the past ten years of the electrical engineer Kolja Kuse, his brother Björn, a stonemason, and the plastics engineer Siegfried Brauner is something we have absolutely no experience with: natural stone as a replacement for aluminium? Natural stone instead of reinforced concrete? Natural stone as an alternative to steel laminated springs in lorries? Natural stone as part of plane wings or helicopter rotors?

Compared to this, extra thin kitchen tops with invisible cooker tops or a heated walls in a bathroom seem to be rather normal. These ideas, which have been introduced at the Materialica, EuroLite or Stone+tec fair, may be daring but they are definitely not crazy. They are just innovative. Carbon fibre reinforced composites have been known for quite a while. Light and robust bicycle frames, nearly complete cars, lamella reinforcements for concrete constructions as well as reinforcement for thin natural stone tiles etc. have been made with this material. 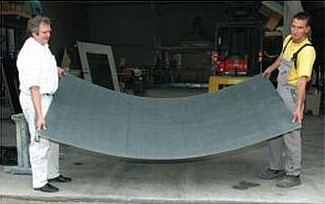 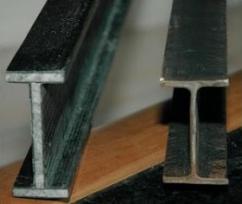 What are the advantages of the combination of natural stone and carbon fibre? This is very easy to explain: CFS (carbon fibre stone) has got better properties, as natural stone provides for an enormous pressure resistance and still can be compressed, whereas carbon fibre guarantees a tremendous tensile strength combined with a low traction elongation. If the stone is prestressed and then joined with a high traction by means of epoxy resin it can be loaded and formed by an incredible degree without breaking.

The secret of the patented method is to compress only the stone itself, whereas the tractive force is absorbed by the carbon tissue nearly without stretching. This can be made visible with a granite slab with a thickness of 3 mm but a size of three and a half square meters, which is reinforced on its bottom side. If it is lifted by two people it sags more than 30 cm – but is not damaged at all. If it were turned upside down, it would break immediately, however.

And this is what Kuse’s and his colleagues’ second innovative idea is based on: what about coating both sides of the stone with these fibres and produce a construction material which is light and robust at the same time, and which consumes a lot less energy during its production than steel, aluminium and concrete, and, moreover, offering scores of technological advantages which have not been very well known up to now.

There are more reasons for the core made of stone, e.g. the specific weight of granite corresponds to the specific weight of aluminium – a fact which is hard to believe - and weighs only about one third of steel. That means, stone is light! However, the pressure load capacity of granite is as high as of constructional steel and four times as high as of normal construction concrete. 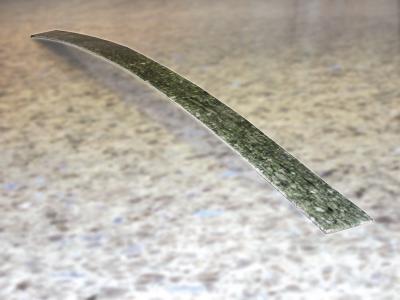 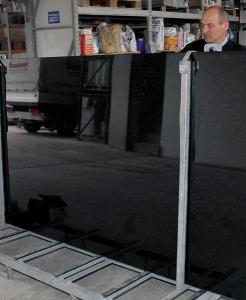 Certain specific characteristics can be created by the choice of the natural stone (e.g. the differences between granite and gneiss are considerable) and the alignment of the carbon fibre: The more the fibre is aligned in the longitudinal direction of a constructional element, the less flexible it becomes. And vice versa: if the fibre is aligned diagonally to the constructional element’s axis, it becomes softer and more resilient. That is how elasticity can be adapted for many ranges of application as well as by the ratio stone – carbon fibre. It is most surprising that permanent bending is avoided – as soon as the load is removed, the constructional element turns back into its original form.

At the same time CFS shows no fatigue: after one million turns of load alternations no structural changes of the double-layered test elements can either be seen or measured.

Moreover, CFS guarantees linear shock absorption. That means, that the material stops swinging after an impact, whereas metal structures tend to swing for a long time and this swinging may even build up under unfavourable conditions (resonance frequency) and cause self-destruction. Nowadays, this can be eliminated with a great effort and partly reduced with complicated control engineering, but it can be completely avoided by CFS in future. Extremely accurate positioning of machine parts will be one of the first applications.

If you are open for the chances offered by CFS, you will soon have more new ideas: CFS beams could change structural and bridge engineering completely and replace steel reinforcement or even reinforced concrete. Earthquake-proof buildings and light, collapse-proof hall roofs without expensive swinging compensation could be built. A big manufacturer of solar cells has shown some interest in replacing the aluminium of the assembly frames and the steel for the beams by a less problematic material.

Car bodies would be a lot lighter and safer in the case of accidents with CFS. For boat building CFS would combine a high torsion resistance with a great breaking resistance. In the field of mechanical engineering, where swinging is a big problem, light but still extremely strong, fatigue-resistant and nearly vibration-free designs could be created by means of CFS components. This would be very important for bridge saws and heavy manual machines with quick movements for high quantities. Thin “sheets”, which are reinforced on both sides, are already being used as semi-finished products in lightweight constructions for mechanical engineering.

There is not a long way from these products to the application of CFS in rotors in wind power plants or plane wings, as they require high strength and resilience, low weight and high vibration absorption as well as an extremely high fatigue-resistance – all these requirements are being met by CFS.

And it meets another requirement, which is most important for Kolja Kuse: it is made of raw material which can be obtained and processed without harming the environment and consuming considerably less energy than the production of steel, aluminium and concrete. What is more, steel and aluminium are presently in short supply and therefore getting more and more expensive. 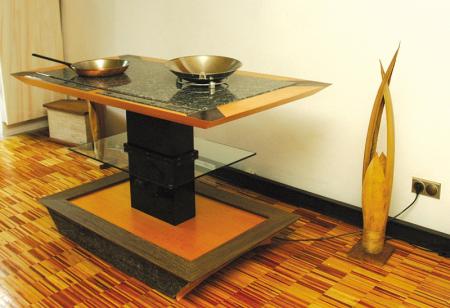 Advantages in the classical ranges of application

There are old and new ideas even in the common ranges of application for natural stone: as already mentioned, CFS granites with a thickness of 10 mm as kitchen tops, surfaces with integrated induction cookers or cooling aggregates, as manufactured for the Mariott hotels in Paris, Zurich and Pilsen, combine the classical beauty of natural stone with the state-of-the-art. Those who can afford it (they are still manufactured manually as prototypes and therefore quite expensive) can have a marvellous cooker with an end-to-end granite surface installed, on which an egg can be fried apparently just “somewhere on the table”.

For the Stone+tec fair, a bathroom was presented at the Rossittis stand, which had wand elements made of CFS slabs made of Brazilian granite with a thickness of only 3 mm. There was a thin heating sheeting with a thickness of only 0.1 mm behind the stone – carbon layer, which can heat the stone surface up to 26°C within 90 s. This method of wave heating is energy-saving although it is supplied by electrical energy, as it heats up immediately and has only to be switched on as long as it is needed. Coating elements, that do not have to be bent when they are humid, can be manufactured for all inside applications and there are plans for light weather-proof garden furniture.

For the time being, the individual working steps such as calibrating, coating, separating, grinding and polishing as well as water jet cutting and completing of the slabs are carried out at the partner companies such as Grein, Becke, Augst, Tabarelli or Udo Huber on various sites and are therefore quite complex. That is why the planned assembly of the first integrated production line is urgent, but other technological way of application must also be continued consequently.

Co-operation is welcomed. The motto is “design-on-demand”. The idea is to give natural stone companies the opportunity to open up new business segments by means of CFS and develop own ideas for new products in co-operation with TechnoCarbon. Completely new ranges of application and customers become available for natural stone industry. The more so, as the development is at its very beginning: it has to be tested which kind of stone is most suitable for which application.

Mechanical engineers, construction engineers and architects should detect this material and develop completely new designs. Long-term testing and practical experience will present new possibilities – as well as its limits. Permissions of the construction authorities have to be applied for and the required certificates have to be supplied. This will only be possible in the relatively short time desired by Kuse and his presently ten partners if new partners and investors from other branches of industry join them and help to support further development and the practical implementation.

Chances for the climate

“CFSinside”: the trade name is the aim. One day, TechnoCarbon CFS-coated natural stone as a versatile light construction material is supposed be “in” almost all areas of life, as well as Intel processors are in PCs, thus reducing the CO2 emissions into our atmosphere. “As a famous German climate researcher keeps saying, we have to decrease the CO2 emission within 100 years under 20 % of the actual value, if we want to bring climate change even only partly under control” , says Kuse, who is concerned and at the same time encouraged. “This is an ambitious target especially for the highly industrialized countries and CFS could contribute considerably to reach this target”. Therefore we try to make his development available all over the world as quickly as possible and to make marketing of his idea as easy and cheap as possible. “If the application of steel and aluminium can be reduced, a lot of energy can be saved. Moreover, CFS offers a wide range of individual products which can be manufactured manually on site, thus creating and guaranteeing jobs. On the other hand, mass products e.g. for mechanical engineering can be produced cheaper in fully automatised production lines, so that CFS can prove its ecological and technological benefits also on a large scale”. These are some of the reasons for Kuse’s open strategy.

After all, it is not surprising that TechnoCarbon took part in the international climate conference in Bali in November 2007, presenting its innovative ideas to the deciders from all over the world. As Kolja Kuse mentioned, especially the so called “third world” showed maximum interest in the new material, because their countries´ technological development is under great pressure due to the lack of the steel and aluminium, which are very expensive.

Finally a new organisation was founded: GRANIDUS (Granite for Industrial Usage) is an international association with the target to introduce natural stone, especially granite, for a worldwide industrial usage in various fields of building construction and engineering. GRANIDUS is a platform for research and promotion of new CO2 - neutral basic materials based on natural stone (for further information please refer to: www.granidus.eu)