The stone industry in Sweden

While natural stone is found all over the world, many people usually associate their location to more familiar countries like Brazil, India, Italy, Turkey, etc. Few people, perhaps only the more knowledgeable professionals, tend to associate natural stones with Sweden. The natural building material which first comes to mind associated with this part of the world is usually wood. But Sweden does have a fairly wide range of natural stones, especially granite, and this report aims to highlight the stones from this country.
Sweden actually had a premium image in the stone industry a little more than a decade ago. That was when the United States of America and Japan were considered to be major markets and in these countries there are actually a lot of references to Swedish stone in the different applications. But time passes and the world changes. The granite industry developed in a very big way in India and Brazil, and since Swedish stones ended being a significantly more expensive in comparative terms, they lost market share to the new entrants. Loss of market share ended up being loss of share in mind, and somewhere along the line, many people stopped thinking of Sweden as a source of natural stones.
But the clock keeps ticking, and the world continues to change. Nowadays, with salaries and the costs of other inputs rising in India and Brazil and other countries, and the Swedish companies having made serious efforts in regaining competitiveness, the price difference between granite from Sweden and those coming from India and Brazil is not as big as before, is no longer considered as important a factor as before. Higher transport costs to Europe, and a higher level of unpredictability in logistics from Brazil and India has meant that Swedish materials have been gradually recovering their market share in Europe.
Size of industry
The stone industry in Sweden is small in size. The total number of people working in the industry is only around 1200. The total turnover is around 120 million Euros. Most of the activity in the country is restricted to quarrying, with the processing being done in other countries like Italy, Spain, China, or Poland. There are only 3 companies in the country employing more than 100 people, and naturally enough, they also dominate the market. 70 to 80 % of the consumption is for outdoor applications, pavements, town squares, etc. and a lot of the stone supplied is imported from Portugal and China. 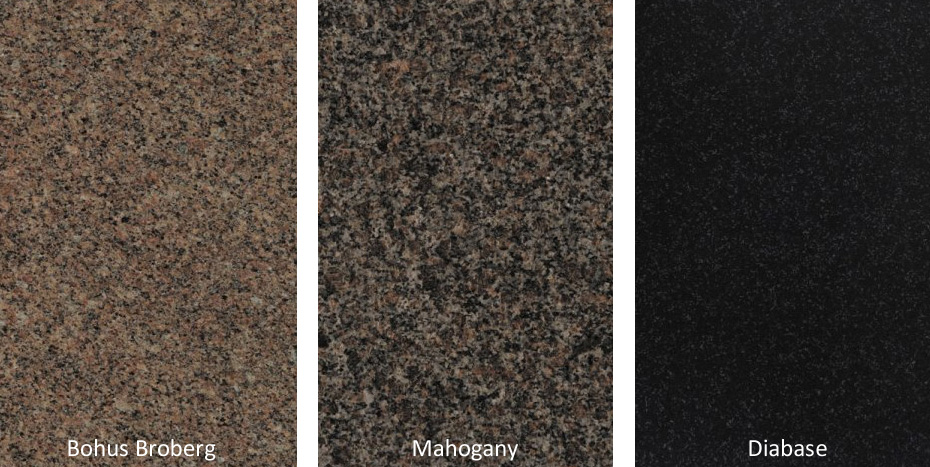 Materials:
We now detail some of the more important granites of Sweden, for basically, what is principally found in Sweden is granite. Most quarries are located in the south west of Sweden.
Sweden Mahogany This granite is a material for the world market because it is similar to Dakota Mahogany, which is well known in the United States and the Far East countries.
Vanga Red This material has been quarried since the 1930s and is mainly used for facades and in other construction applications. The biggest markets for this Swedish material are Poland and China.  One of the most curious phenomenon observed anywhere in the stone industry must be of Polish masons working in the quarries of Vanga Red making cobblestones for the Polish market, and this is precisely what was happening during 2011.

Sweden is also known for its black diabase, and there are several quarries of this colour. Different names have been given to different varieties of blacks. The biggest application tends to be for the manufacture of funerary monuments in Europe and Japan and they command a premium price.
Black Bonnacord Current production is estimated to be around 1800 to 2000 cubic metres per year.
Black Finegrained variety Main market is Japan and China. Estimated production is around 450 cubic metres per year.
Black Ebony This material is also sold to Poland, apart from China and Japan. Current production is between 1300 to 1500 cubic metres per year.
Black Gylsboda Estimated production is between 1300 to 1400 m3/year.
Grey Bohus/ Red Bohus A grey fine-grained material familiar in the international markets. There is also a red variety of the material.
Bårarp This material is similar to Indian Himalayan Blue and there 4 different quarries of the material. Total estimated production is 4500 cubic metres per year. Sales of this material to Germany and France have been increasing in recent years.
Apart from granite, quartzite located in the middle of the Sweden. Limestone is extracted in small quantities in Öland and Gotland, of brown-coloured and sometimes grey-red.

What of the future?
Kai Marklin, the President of Swedish Natural Stone Association, moans the fact that Swedes do not use as much stone as they could- demand for natural stone in Denmark, a country of half the size in population, he says, is the same as in Sweden. Steps are being taken to increase consumption of stone in the local market. The Swedish Natural Stone Association brings out a magazine every three months, targeted at architects and decorators, and provides all kinds of information to those seeking it. Wish him luck!
Hans Rasmusson of the Swedish company Emmaboda, to which this magazine spoke at great length for this report, sees growth in the years ahead, at least in the European markets. He expects Sweden to once again become an important supplier of blocks to the Baltic region, Russia, Germany, Poland and North Italy. Swedish stone is still practically unknown in the Middle East, and who knows where else they may find new markets.
In other words, for all the turmoil in the world, Swedish stone actually has more possibilities than threats in the future.