Stars That Shine in Marble

A large and very special piece of art, using Greek Kaviros marble and high-grade steel, was made in 2002 in the city of Neuchâtel in French speaking western Switzerland. It was a highly demanding job not only for the artists, but also for the stonemasons involved.

Back in 1993 Elisabeth Masé, a Swiss Artist living in Bielefeld/Germany, and Simon Rösch, an architect from Basel, submitted the winning proposal in a Swiss national competition for an artwork to enhance the 16 m wide and 118 m long internal courtyard in the new wing of the University of Neuchâtel. Instead of a sculpture they proposed a depiction of the forty-four heavenly constellations of the Milky Way as high-grade steel inlays in a floor of pale, cloudy marble. During more than seven years of planning and production the artist and the architect worked closely with a team of astronomers, geologists, software experts, mineralogists and metallurgists. With its size of more than 1800 square metres, “Les Cours Etoilées” (The star courtyards) is one of the largest public art projects in Switzerland. 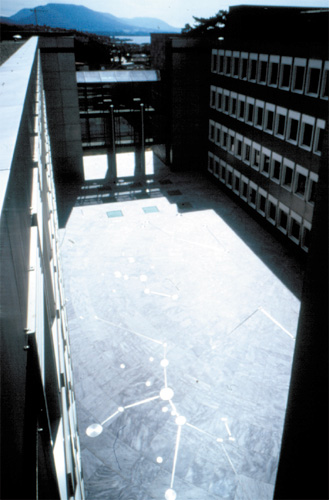 The newly built university wing is situated on a terraced slope with a wide outlook into the distance and to the Lake of Neuchâtel. The heavenly skies extend above the two generous, open internal court-yards and are reflected in the ideal expanses of the star-filled “heavenly ground”, the artist explain in a project report. Viewers can walk through the “heavens”, measuring them out step by step or - the higher they ascend up the glassy linkways - can look down in wonder at the airy spectacle gleaming in the sunlight.

The abstract constellations of the Milky Way, which is visible both in the northern and the southern hemisphere, were set into the pale, cloudy marble floor in the form of polished chrome steel strips and roundels according to their real heavenly coordinates. The connecting main axis between the south and the north poles (the east and west courtyards) runs diagonally through the exact centre of the covered conduit that is used as a cafeteria. The poles are in the centre of the adjoining north and south facades of the two connected internal courtyards.

“The implementation of the artistic idea was probably the greatest challenge facing us in the 66-year history of our company”, says Dr. Peter Eckardt from Eckardt Natursteine AG, a well-known Swiss stonemason and stone dealer company, from Volketswil near Zurich. According to Eckardt - who is a geologist by profession -the key points in the process were as follows:

Originally it was planned that the covering for the courtyards and cafeteria in the central section should be of the same marble type that had already been used in the facade of the new building. But for various reasons another solution had to be found. After much research, a very light stone with a pattern producing very nicely the association of a cloudy sky was found in the Greek Kaviros crystal marble. Furthermore, this stone provides more light in the courtyards than would have been the case with the darker stone of the facade.

As part of the planning process, the setting method and water drainage also had to be determined. A chip mortar bed was chosen for setting the marble slabs since it has an anti-capillary action and does not retain water but ensures rapid drainage under the slabs. A roof slope of only half a percent, with a ridge crown respectively under the two Passerelles at the courtyard ends, guides most of the rainwater to the gutters on the central section. The remaining water is able to escape from the courtyards to the gutters and areas of lawn at the boundary of the courtyard areas.

Since only 29 different types of circular segment had to be produced, but these in large numbers, 29 steel stencils were cut out by laser and transported to the factory in Greece. The radial edges of the marble slabs were cut on a grinding machine; the curvatures were then aligned with the steel stencils by hand. The slab surfaces were then additionally finished to make them non-slip for anyone crossing the courtyards.

Before setting the marble slabs, the axes of longitude (meridians) in the courtyards had to be geometrically determined, which was done with theodolites stationed at the polar points of the two halves of the heavens depicted. The distances between the concentric lines of latitude and the poles were constantly checked during setting. The chip mortar was mixed locally, laid and levelled off. The reverse side of the slabs was given a bonding layer of bonding mortar. The slabs were then set by hand and well knocked in. 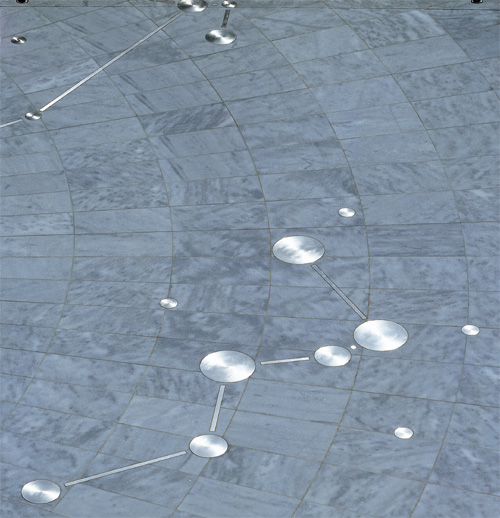 In order to cater for the heat expansion of the marble surfaces, the courtyards were divided into many dilatation fields. These fields are divided from one another by strips of foam material and sealed joints. The expansion difference between steel and marble is absorbed by cuts in the longer steel sections as well as by the very elastic adhesive.

With regard to the precision of the positions of the lines of latitude, meridians and stars, the artists wanted tolerances in the millimetre range. These very small tolerances could not be achieved since the buildings (and thus the neutral points in the poles) and the covering itself kept moving horizontally by a small amount as the consequence of temperature changes for example. Subsequent measurements have shown that precision now lies in the centimetre range and is better than 0.01 percent for the large distances (longitudinal extension of the courtyards up to 118 m).

The artistically inspired star chart in "Les Cours Etoilées" in Neuchâtel is the depiction of a section of the starry sky as it can actually be observed in Neuchâtel. In order to implement the depiction precisely, the positions of the stars had to be specified to a precision of seconds of arc.

The inventory of stars chosen for implementation is restricted by the course of the courtyard boundary and comprises a total of 450 stars brighter than magnitude 5.2. The catalogue of the “Centre des Données Astronomique de Strasbourg” was chosen for collecting the electronic data and selecting the stars located in the section of sky to be depicted.

The apparent visual brightness of the stars was divided into six classes and each of these classes was allocated a disc diameter of between 20 cm and 120cm. Due to the careful measurement and installation of the star intarsia, the area of the courtyards now contains a map of the starry sky for walking on which directly invites the observer to practice astronomical measurements.

(From a report by Dr. Lukas Labhardt, Astronomer, Basel / Switzerland).