Situation and perspectives of the marbles of San Juan (Argentina)

In the province of San Juan there are important deposits of marbles which have an intermittent production since many decades, in three well defined districts:

Currently the only area where production is going on is the District San Juan South, about 85 km away to the southwest of the capital of the province. 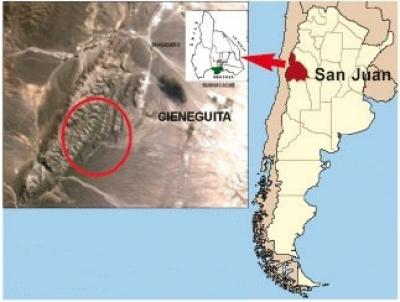 This district is characterized by its calcareous sedimentary type marbles in which predominate tonalities that vary from clear gray, brown or grayish brown, sometimes reddish, to black. The main production, which shows a certain continuity, corresponds to the Moroccan variety, of grayish brown tones with white and black veins, while the lunel varieties (gray with white or black veins in "spider form") and black "galaxy" or "tulum" are exploited intermittently in spite of there being important reserves.

Less exploited due to the limited reserves known till now appear the so called "Rosa Francia", "Rojo Verona" and "San Mauricio", of colours that attract for their uncommon beauty.

Deposits of marble of the province of San Juan (Argentina)

The extraction of marbles of the South District are concentrated mainly in a small valley known as Potrerillo, which is reached from the locality of Cieneguita.

There one can see benches of sub-vertical position concordant with limestone and regional dolomites. The black marble that appears in the extreme north of the valley, is a compact rock of fine grain of black colour with few veins of white colour of less than 1 mm (Fig.2).

It is present in banks of 1.5 to 3 metres thickness, compact, in an open front that oscillates between 20 and 40 metres wide.

The stone benches of Moroccan marble occupy the entire highland range covered by the valley to the west. This includes a compact rock of fine coloured grain, predominantly clear gray intermixed with white colour veins of less than 30 mm, with simple metal clipping fissures of less than 1 mm full of ferrous oxide (fig. 3). The uncovered stone benches have thickness of between 0.50 to 2 metres, even though the rudimentary methods applied up to now make it difficult to appreciate the exact value.

Regarding the manifestations of reddish marbles known as "Rosa Francia", "Rojo Venato" and "San Mauricio", its deposits consist of fault openings re-cemented and coloured by ferrous oxide of diverse intensity. The structures incline between 70 and 90, with thickness varying between 0,5 and 2,50 m (Fig. 4).

Physical-mechanical tests corresponding to European norms were conducted, the results of which are summarized in the table below: 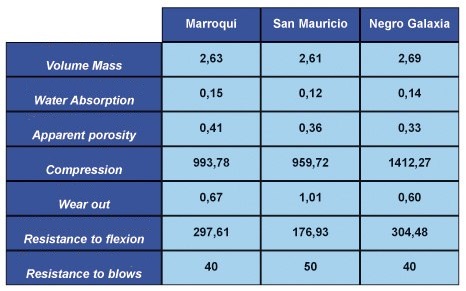 The extraction of the marbles was done by means of open air quarry fronts, making use of the sub-vertical position of the benches. The work done in black marble are located in the extreme north of the valley, taking the benches according to its direction.
In the case of Moroccan exist two sectors well differentiated:

A. A hillock that comes up inside the valley, exploited from north to the south.

B. Several new fronts in the western lower slope, in small quarries, which make use of benches with potentially important reserves.

In the case of reddish marbles, the work done in open air to date is small, destined in particular for producing small sized stone pieces.

Currently, in the south district there is only one plant in operation, located in Cieneguita, with radial saws and polishers of diverse type.

The production of marbles in the Sarmiento Department has traditionally been in the hands of small family companies, with limited technical and financial resources. For this reason, the exploitation was characterized by rudimentary methods on the basis of uncontrolled use of explosives, which meant that a very high percentage of the material extracted was in size which does not exceed the small sized pieces. The extraction of blocks of 1.5 to 3 cubic metres has always been anecdotic and limited to black marble, where one can observe work with some intention of producing pieces.

The production was analysed taking into account the time period between 1991 and 2003, with data referring to rough stone. 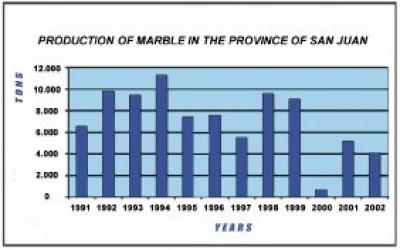 1. The deposits of the south district of San Juan of marbles lunel, Moroccan, and black, are striking for their ornamental beauty as well as for the volume of their exploitable reserves.

2. The physical-mechanical characteristics allow us to determine its use mainly for cladding and flats of low traffic.

3. The volume extracted is low, due to basically two reasons:

- There is no advertising campaign promoting the introduction of the product in the market, with assistance in trade fairs or other methods of popularising its advantages.

4. There is a lot of competition in the most important consumption centres of the country from alternative industrial materials, in particular ceramics and glass.

5. The lack of adequate equipment can be due to non-availability of credit facilities, oriented to facilitating the progressive evolution of the exploitations and of processing plants (gangsaws).

6. The devaluation of the Argentine currency brought back competitiveness to the companies with respect to prices, it is hoped that the current situation becomes structural, by means of implementing economic measures by the government and competitive strategies adopted by the companies that help in exterior markets for the products.

7. Some of the proposed solutions:

- Reforming of policies directing them towards intensifying the exploration and exploitation of deposits and intra-continental cooperation to modernize the institutions related to development of mining.

- Improve the relations between organizations responsible for mining concessions and intensify the exchange of experiences between the geological and other agencies in charge of mining.

- The small and medium companies with new projects have access to benefits of the law 24196:
· Fiscal and monetary stability.
· Exemption from custom duties applied to all the new products for imports of equipment for users.

· Capacity of evaluating mining reserves, which implies the possibility of capitalizing up to 50% of the mineral reserves only for accounting effect and without aim of determining benefit taxes.