At a time when many major economies of the world are in recession or passing through a period of slow growth and great uncertainty, stone factories in many countries have been cutting down on new investments. There is one country, however, which is defying the otherwise cautious mood and continues to be, year after year, an endless market for stone companies. That country is the Kingdom of Saudi Arabia.
During the last few years the Saudi Government has made huge social investments, building houses, hospitals, schools, universities, mosques, office buildings, etc. and the massive construction activity as a result has created an enormous demand for natural stone. To give just one example, King Abdullah announced in April,2012 the setting up of 16 universities, with an investment of US 21 $ billion- and each such project means thousands of square metres of stone. Another example-The Mecca- Medina superfast train will have 5 stations. To give an idea, only the station in Jeddah requires 170000 square metres of granite flooring of 7 to 12 cm thickness. The Medina station will have 94000 square metres of flooring. The Government has also recently signed contracts for building metro in different cities of the country and they are expected to be completed in 7 years. There are, literally, hundreds of such major sized projects going on in the country, or in the pipeline, and it would be simply impossible to name them all.
Combined with a law passed some years ago banning the export of rough granite blocks, with so much building activity going on in the country and so many more projects expected to begin in future years, this has meant that Saudi companies have had great incentives to invest in new processing capacities. Result-an unprecedented investment had been taking place in granite factories in the last few years. New investments in machinery has slowed down in 2015, but, be they multi-wire machines, or gang saws, or complete tile plants, or other sophisticated machines, there never have been as many expensive machines in the industry as now. Another law passed  by the Government forces stone companies to sell “final” products only, and the consequence of this means even more machinery has been invested to produce finished stone.

Given the rapidly expanding production capacity in granite factories, it is difficult to calculate the exact amount of annual production. It would suffice to say that 5 years ago the production capacity of slabs was less than half of what it is today, and during 2013 the production capacity of slabs and tiles increased by another 25-30%. Taking into account the number of gang saws already installed, add the production from multi-wire machines and from block-cutters to complete tile plants, the current production capacity of granite slabs in 2 cm thickness equivalent in 2014 was approximately around 1.500.000 sq metres per month. This means the total production capacity in Saudi Arabia is more than 15.000.000 square metres per year. Only China, India and Brazil have more processing capacity, thus making the Kingdom the fourth biggest granite processing country in the world. In fact, the current granite processing capacity in the Kingdom is probably more than that of Italy and Spain combined. The Saudi company SMG is considered by some to be the biggest granite slab processing company in the world today. Other major companies are Al Ayuni, Al German/Al Watania, Al Takadom, D.Matco, Marble & Granite Int´l Co., Rakas, Red Sea Mining, Awtad al Riyadh and Ymama. New players are getting into the game now, such as Castle Rock and Chinese investors are also getting into granite processing. Very soon more names will become familiar in the world of granite as new factories come up and start processing stone.
So big has the market become in recent years, there is some market for almost every kind of material that is quarried today in the world. 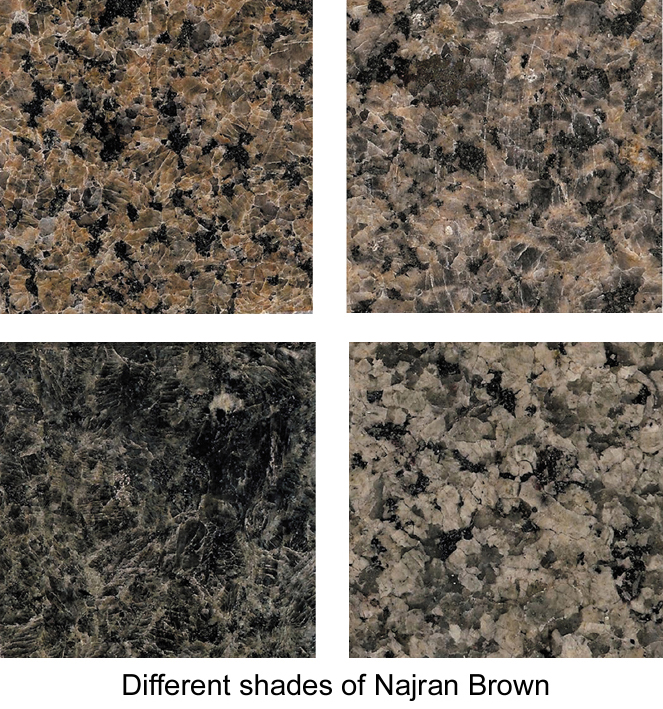 Normally a country with such a major processing capacity in stone also tends to be a significant exporter. In this sense the Kingdom of Saudi Arabia is an exception. The demand in the local market is so big, in most public sector projects only Saudi granite is specified, thus Saudi companies are already finding it difficult to keep up with local demand and meet deadlines. This may be one reason why the rest of the world is still not aware of the huge and growing processing capacity that exists in the country. Its materials, when previously exported in the form of rough blocks, helped to create awareness of the existence of Saudi materials. More important, the extraction capacity that had developed when blocks were exported also helped to keep the large number of newly installed machines working.
Such rapid growth of the industry brings its own unique problem: finding qualified labour and managers at all levels is increasingly difficult. This problem exists everywhere in the world, but is especially acute in Saudi Arabia.
How long will the boom in the Saudi granite industry last? Ask the knowledgeable people this question and they will be usually surprised since most people have never even considered it. The temptation will be to answer-forever!
May such optimism last always.
Our thanks to Mr. Manrico Fiore and Mr. Rahman Al Amin for the information provided.