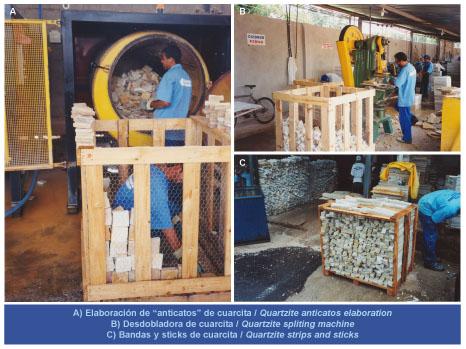 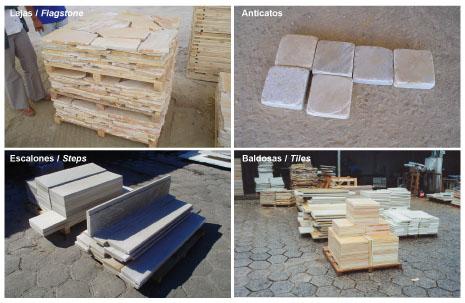 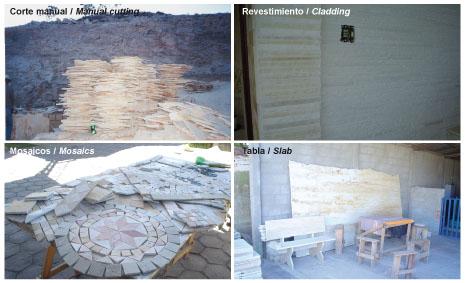 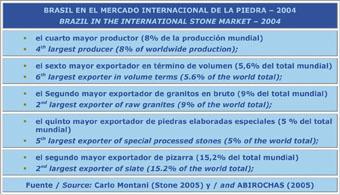 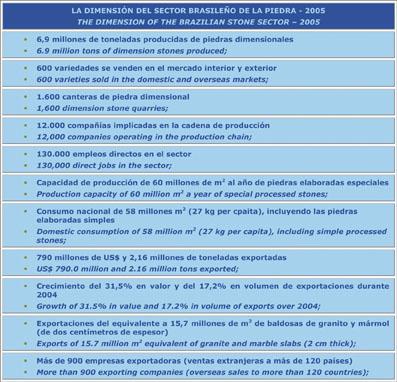 This text was elaborated by geologist Cid Chiodi Filho (cdchiodi@terra.com.br), Kistemann & Chiodi Assessoria e Projetos. The primary data about exports were obtained starting from consultation to the Base ALICE of MDIC (Ministry of Development, Industry and External Trade)

Worldwide, Brazil is the 5th largest country in territorial extent and the 6th in population. Endowed with vast natural resources, Brazil is one of the ten largest mineral producers of the world.

Brazil is one of the largest producer and exporter of dimension stones on a worldwide scale, acting like a effectivel global player. In the world market, Brazil jumped from 12th place in the ranking of special processed stones exporters to the 5th place in 2004. Brazil thus accounted for 1.4% of the international special processed stones market in 1999, rising to 2.3% in 2001, to 2.9% in 2002, to 3.5% in 2003 and reached 5.0% in 2004.

BRAZIL IN THE INTERNATIONAL STONE MARKET – 2004

The states of Espírito Santo and Minas Gerais are the two principal Brazilian producers and exporters of dimension stones. Espírito Santo stands out in the granites and marbles segment, as well as Minas Gerais with slates, foliated quartzites and soapstone. Other important centers of production are the states of Bahia and Ceará, in the northeast region, with great variety of granites, massive quartzites, travertines and limestones.

THE DIMENSION OF THE BRAZILIAN STONE SECTOR – 2005

The states of São Paulo and Rio de Janeiro constitute the two principal Brazilian poles of consumption of dimension stones, with the greater concentration of companies that execute finishing works and application of dimension stones (marble workshops). The Brazilian exports of dimension stones reached US$ 789.97 million in 2005, with a positive variation of 31.45% compared to 2004. In physical volume, those exports reached 2.16 million tons, which represented an increase of 17.23% in relation to the previous year. But while the world knows of Brazil mainly as a granite producer, quartzite is relatively unknown and it is a material with great potential.

The Quartzites of Minas Gerais

The ten principal destinations of those exports embrace Italy, Germany, France, Japan, Belgium, USA, Austria, Holland and Spain, which absorbed more than 90% of the total exports. Except for Spain and USA, all the other destiny countries integrate the group of the largest world importers of simple finished products, classified in the trade code 6801.

Italy, Germany and France absorbed 80% of the exports. That concentration happens because the exports are being made for every time smaller number of big clients, which redistribute the quartzite products in Europe.

The quarrying activities were initiated in the middle of the 19th Century and today they are distributed over an extension of 20 km, along São Thomé's Sierra. From Southwest to northeast, the larger concentrations of quarries are denominated Paredão, Chapadão, Coopedra, Carimbado and Pico do Gavião.

The productive structure is formed by 120 quarrying and processing companies; 70 are linked to the cooperative of producers (COOPEDRA). The largest companies, some of them with more than 100 employees, are associated to AMIST - The Miner's Association of São Thomé Stone.

Approximately 4,000 direct jobs are generated by the activities related to the São Tomé quartzites. Specifically in São Thomé das Letras, 70% of the economy is linked to the quartzite.

From the geological point of view, the São Tomé quartzites are old metamorphic rocks (Late Proterozoic), essentially siliceous and with marine origin, tectonically correlated to the São João del Rei Group. The mineralogical composition of the São Tomé quartzite is relatively homogeneous and quite simple, with preponderance of quartz (95% to 98%) and reasonable amounts (3% to 5%) of white mica (sericite and muscovite). The other identified minerals in thin sections are always accessories ( < 1%), with prominence for turmaline, opaques and iron hydroxides. Clorite, epidote, zircon, rutile and caulinite, described as rare, are present in some areas. Other references point the occurrence of magnetite, ilmeno-magnetite and hematite. Because of the mica amount and weathering degree, the quartzites can be more or less foliated and friable. The non weathered quartzites have whitish coloration, becoming yellowish by percolation of iron hydroxides. Rosy quartzites compose more restricted levels in the sequence, should reflect the iron oxidation. Whitish green varieties, designated "Carrancas" or "Carranquinhas", are extracted more to northeast of São Thomé's Sierra, near Luminárias, in another strip of foliated quartzites correlated to the São João del Rei Group.

The beneficiation processes of the São Tomé quartzites are physical-mechanics and quite simple, sparing the use of chemical products and not generating noxious effluents to the environment and the human health. Diamond saws make the squaring of tiles, generating sticks / strips as by-products. Splitting machines (mechanics and hydraulics presses) are used for the cubetes, “paves” and strips elaboration, allowing the cut of pieces with up to 15 cm thick.

Continuous ovens are used for thermal treatment and darkening of the yellow quartzite, that acquires brownish rose coloration. Rotative machines of aging are used for the “anticatos” production, starting from “paves” and “petit-paves”. Manual cuts, with hammer and chisel, are made in the own quarries for obtaining of rustic tiles and flagstones.

Under the customers' order, tiles and slabs can have calibrated thickness. Also under order, some companies make polished surfaces and finished borders. The calibration and polishing processes are quite onerous, because of the quartzite high abrasion degree.

Technologically, the São Tomé quartzites are a quite strong rock, in general not friable, very resistant to the abrasion and practically inert to the attack of chemical products. The iso-orientation of the phyllossilicates (micas), according to the metamorphic foliation, gives high flexural resistance to the slabs and tiles.

The natural cleavage surfaces are antiskid. The clear colors reflect the sunlight, avoiding the super-heating of floors and walls in external areas. As quite cohesive rocks, not friable and antiskid in the natural faces, besides very resistant to the abrasion, the São Tomé quartzites are considered an excellent option for flooring, so much interns as external, inclusive for high foot traffic.

The quartzites add the beauty of the marbles to the granites resistance which gives them great commercial value. For the degree of whiteness and small amount of chemical contaminants, the whitish varieties of the São Tomé quartzites have been used as raw material for ceramics. Other uses for milled quartzites, as fillers, bricks, filter material and mortars in general, can be shortly made possible.