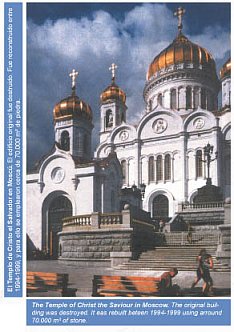 This exclusive report looks at the main sources of decorative stone on the 17.075.400 km² territory of the Russian Federation, the leading quarrying and processing companies, imports, exports, the consumer market and future prospects. Author Yuri Sychov is Head of the Stone Dept. of yhe Federal Institute of Mineral Resources, and President of the Stone House Club in Moscow.

The Russian decorative stone industry today comprises 240 - 250 quarrying and processing companies, most of them quite small. Total raw material extracted in 2002 was around 450.000 tons, and the total amount processed was about 3,25 million m² (in slabs of equivalent 2 cm thickness). Some 31% was granite and similar hard rocks, 64% was marble and hard limestone, and 5% was soft limestone, sandstone, slate, quartzite, etc.

The most important stone producing region in Russia is the Urals (68% of blocks and 27% of processed products) - many quarries and processing factories are based here. The country biggest marble quarries are in the Urals region: Koyelga, operated by ZAO Koyelgamramor with an annual output of around 120.000 tons, and Mramorskoye, operated by ZAO Uralskii Mramor, with an annual production of around 53.000 tons. Russia's third big marble quarry is in south-central Siberia. Operated by OAO MKK-Sayanmramor, the Kibik-Kordon quarry currently has an output of around 27.000 tons a year.

Most granite quarries are located in the north-west of Russia, in the Karelian Republic and in Leningrad region. The Vozrozhdenie quarry, operated by Vozrozhdenie Holding Co., is the largest with an annual output of 26.500 - 32.000 tons. Since the break-up of the USSR, no statistics have been gathered by state authorities on decorative stone extraction or processing. However the author and colleagues have obtained reliable data from field surveys. The data in the table below is accurate to within 10-15%.

As a rule, the big Russian factories specialize in terms of the material sawn and polished: they work either marbles or hard stones. The largest marble processing plant is owned by ZAO Koyelgamramor. It is situated near Koyelga quarry and its annual output is around 400.000 m². Products include slabs, tiles and architectural products. The other large marble processing plant is operated by OAO MKK-Sayanmramor and it is situated near the Kibik-Kordon quarry in Siberia. Its principal product is marble tiles.

Among the granite processing establishments there is one which stands out - Moscow Stoneworking Combine (MKK) which in fact comprises four big factories. Combined output is around 380.000 m² a year (in equivalent 20-30 cm slab thickness). Products include slabs, tiles, paving, architectural parts, mosaics, memorials, kerb stones, etc. The second large granite processing organization is based in St Petersburg. The Vozrozhdenie group produces around 180.000 m² a year in 3 specialized shops. Slabs, architectural parts, steps and monuments are typical products. The third major granite processing company is ZAO Karelskii Granit with a factory near Kondopoga town in the Karelian Republic. The annual output is 80-90.000 m² and the main product line is slabs sawn from blocks extracted from various Karelian sources.

Most Russian stone quarrying and processing companies employ modern equipment imported from Italy and other developed countries. In the marble quarries, portable diamond wire saws and chain saws are the most popular types of extraction machines. Today machines made in Russia can sometimes be found working alongside imported machines. In the granite quarries, the prevalent extraction technology is to drill a line of holes which are then filled with " gentle " explosives. This is known as "dynamic splitting" or the Finnish method. The explosive generally used today is called Granilen and it was invented by Russian scientists. A new method of slow explosion is now in use in some quarries. With the so-called "gas wedge" technology, the explosion in the blast holes proceeds very slowly - several seconds duration - ensuring minimum damage. The jet flame method is rarely used in Russia today. Diamond wire sawing is employed in the Vozrozhdenie granite quarry (one machine) and in one or two gabbro quarries in the Karelian Republic. This method is not very popular in Russia on account of the short life and high cost of the diamond wire when cutting granite.

All Russian decorative stone quarries are open cast - with one exception: the OAO Leningradslanets mine in Leningrad region. The profitability of mining limestone blocks here is ensured by sales of a by-product - combustible shale. Underground quarrying at Kibik-Kordon in Siberia is currently under study.

Most Russian stone processing plants are equipped with modern imported machines and production lines. According to the author's research, there are around 30 modern frame saw machines for granite, 8 frame saws for marble and limestone, 30 block cutters for marble and granite, 20 large diameter circular saw machines, 10 multi-axis diamond wire contouring machines, 25 calibrating and polishing lines and many secondary saws in Russia today.

Analytical review of the Stone Market

The Russian decorative stone market is estimated to be worth 400-500 million US $ including imports. The breakdown into product types is:

Nowadays there are two types of buyers in the Russian stone market, which we will call business and direct consumers. The business buyers can be:

Consumers in the business market are usually situated in the big cities. They make large or very large purchases and are very price conscious. They work with well known, established stone suppliers and are paid on a commission basis.

There are three categories in the direct consumers market:

In 2002 Russian decorative stone imports totalled 92.000 tons. The breakdown was:

Regarding granite slabs, Italy, Spain and India are the main suppliers. However the main supplier of large cut-to-size cladding panels and modular tiles is China. This country also delivers a lot of road building products to Russia - kerbs, cube setts, etc.

Stone exports from Russia are minimal - about 1,7-2,0% of the total extraction volume. The main buyers are the CIS countries and the Baltic states. A small quantity of granite blocks (mainly from Vozrozhdenie) was exported to Byelorussia, and some granite slabs and tiles were exported to Lithuania, Latvia and Kazakhstan. Small consignments of white marble blocks from Koyelga and Polotsk quarries were delivered to Italian and Spanish firms.

According to official estimates from the State Statistical Committee of Russia, the GDP is currently increasing at an average rate of 3% per annum. Foreign investments have hit highs and lows but overall the trend is upwards. There has been a building boom in Moscow, St Petersburg and other big cities in recent years and as a result stone consumption has increased - at up to 4-5% per annum. Compared with the situation in many European countries, the prospects for decorative stone consumption in the Russian Federation are currently more favourable.
The share of the direct consumers stone market - currently 40-45% - will gradually increase due to a number of socio-economic factors, including a rise in purchasing power and the establishment of a genuine middle class. History shows that the middle class tends to lend stability to society. The business market will develop with increasing investment in the Russian economy - both domestic and foreign.

Simultaneously with the erection of new bank and office buildings there is a parallel growth in civil construction. In Moscow alone many new building projects are planned, including the Moscow City complex, the Ice Palace, around 60 skyscrapers, reconstruction of the Dynamo football stadium, subterranean trade complexes, the monorail system, etc. Total stone consumption for these projects is estimated at more than 1,5 million m². Stone consumption in the other big Russian cities is expected to increase in a similar fashion.