Reproduction of a Roman Doorway

The workshop of Cantería Olnasa is undertaking the reproduction of the southern doorway of the Roman Church of San Miguel de Uncastillo (Zaragoza, Spain), that currently is to be found in the Museum of Fine Arts in Boston (USA). It is an initiative for, in some way, recovering, part of the lost treasure.

The ransacking of cultural patrimony was a frequent activity in the last century. Many works of art, monuments and even entire buildings, were the object of speculators who exploited the ignorance of the people who did not know how to appreciate the cultural value of their patrimony, but only money, usually a small amount, which they received in exchange. Fortunately, there exists today an important historical and cultural conscience and there are many associations and foundations in charge of protecting the cultural wealth of a people.

Uncastillo brings together one of the richest monumental combinations existing in Aragon. It is one of the localities that, along with Ejea de los Caballeros, Sadaba, Sos del Rey Católico and Tauste, formed the historical Aragon region of the Cinco Villas, located in the north of the province of Zaragoza.

The first historical references of Uncastillo date back to the beginning of the X century. Uncastillo played a decisive role in the process of Christian reconquest. In the XII century it lived a period a splendour that is reflected in the six Roman churches that are conserved there.

Description of the Church of San Miguel and the southern front

The church of San Miguel was built in the second half of the X11 century. From the artistic point of view it is classified as Roman in transition to the Gothic. The southern face consists of three arches supported on two columns on each side. It has a kettledrum, marked by a border of palms and sustained by two cantilevers with head of monsters. The theme chosen for the decoration is San Miguel disputing a soul with the devil. 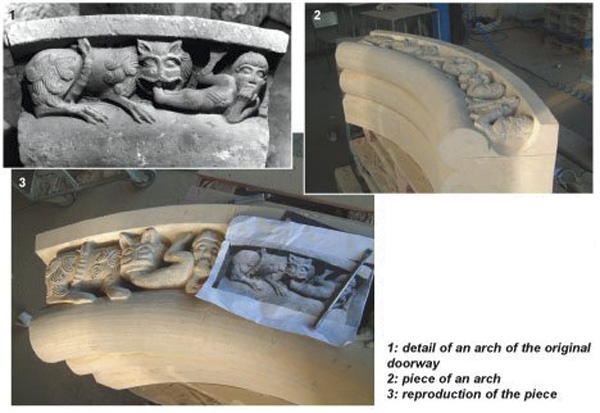 The structure and themes of the doorway of the Church of San Miguel were related to numerous fronts of churches of southeast France, though they show some distinctive features. For example, in France at least one of the arches is dedicated to biblical motifs, something that does not happen here. Another differentiating aspect is that in the Uncastillo front the physiognomy nor gestures are not repeated, as happens in the French churches, which gives it more liveliness. The workshop of Uncastillo was one of the first which in the middle of the XII century introduced in Spain the formula controlling the regulation of the southern doorway. Uncastillo serves as a landmark to follow the monumental decoration plan in the north and northeast of Spain. 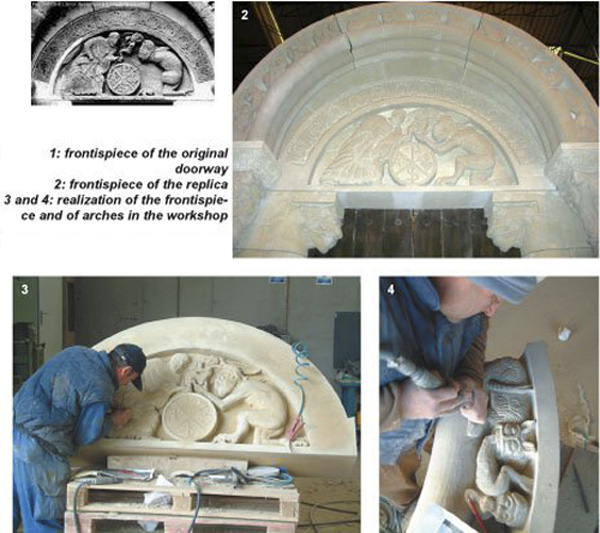 History of a looting

In 1915 the Bishop of Jaca and the priest of Uncastillo sold the southern doorway of the church of San Miguel and later the rest of the building for 800 pesetas to antique dealer from Barcelona, Francis Bartellet, who, in 1928, donated or sold it to (there are different views on this) to the Museum of Fine Arts in Boston, where it is currently installed. The transport to Boston was done in 250 boxes that contained 215 pieces and weighed 24 tons. The reconstruction had to be done on the basis of a photograph, since there were no drawings, marks or numbering that indicated the original location of the pieces. In the year 1991 it was submitted to a restoration which lasted 4 years, the stone was found in a poor state because of exposure to atmosphere.

In the decade of the nineties, the City Hall of Uncastillo and the socio-cultural association "La Lonjeta" tried to recover the building, without success.

A few months ago, the Workshop of Cantería Olnasa took the initiative of making a reproduction of the doorway, with the aim of exhibiting it in different events so as to make known their work and the artistic richness of the area. The first exhibition took place in May this year in the fair, PIEDRA, in Madrid.

There are ten people working in the elaboration of the doorway, which is expected to be finished in 2008. Starting from photographs and plans sent by the Boston Museum, these craftsmen, using the same ancient techniques, are reproducing faithfully each and everyone of the sculptures and reliefs, all the elements that form this jewel of the Roman age. For its elaboration, sandstone from the area, given the name of Uncastillo, is being used.

This workshop was started in the beginning of the nineties. Two youths from Uncastillo, Ignacio and Jorge, began to work with the stone of Uncastillo by collecting the traditional manuals of the ancestors. The work that OLNASA does in the workshop has different orientations in which the company has specialised. Apart from architectural applications in different styles, one can highlight chimneys, the confection of sculpting of decorative reliefs and ornamental shields. Regarding architectural restoration, its team of professionals makes the point of informing about all the aspects related to the conservation of patrimony so as to be able to elaborate the pieces that will substitute those deteriorated over the years. OLNASA received support from the Uncastillo Foundation, Roman Centre, created in 1998 with the objective of collaborating in the recovery and conservation of the rich historical-artistic and cultural patrimony of Aragon. OLNASA pertains to the patronage of this foundation.