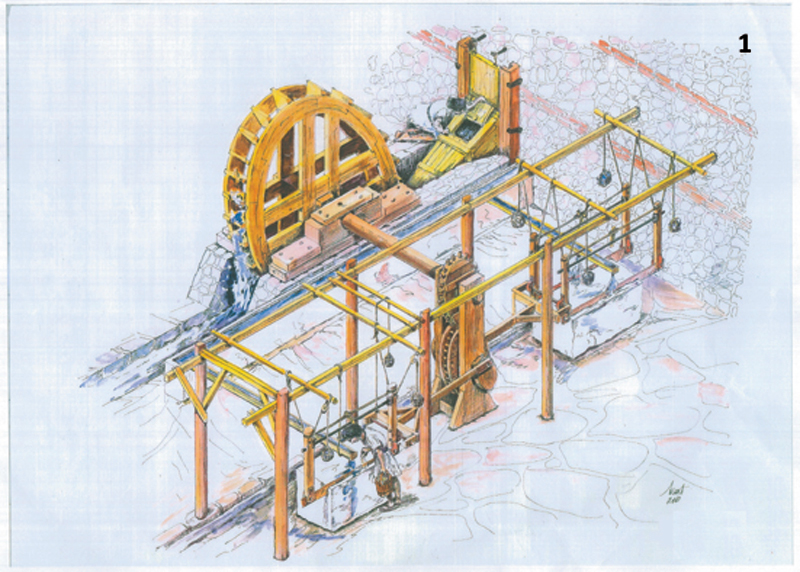 It is so easy for us to think that the machinery used for cutting stone in the industry are all modern inventions, and as for how stone was cut and processed in the distant past, ah, well, who cares ?... Some simple contraption, of course, would be a generalised assumption.

How wrong! In 2005 gangsaws, similar to those used today, were discovered in Turkey. It is estimated they date between 200 to 300 AC. The first one was discovered in Hierapolis, and the second in Ephesus, where a marble factory was discovered among the ruins.

The marble workshop in Ephesus was situated in the middle of a prosperous neighborhood in a city founded around 1000 B.C. The age of gangsaw discovered in Ephesus, is estimated to be between 600 to 700 AC. It was assumed the remains were of a large marble factory because several cut stones were found nearby. (A third machine was found in Grese (Jordan) and its age is estimated to be around 600 to 700 AC).

A relief in a sarcophagus dating by the end of the 2nd century discovered in Hierapolis, (Phrygia),Turkey, and belonger to Ammianos, the owner of a marble factory, shows a technical design of a water-powered twin stone saw mill. It is the oldest evidence of the existence of gang saws in the Roman era. The mill is equipped with the crank and connecting rod system, previously thought to have been a medieval invention, by which the rotary movement of the water Wheel is transformed into a reciprocal linear movement enabling mass production of marble slabs.

Remains of a stone saw mill at Ephesus, with multiple saw blades, dating the 6th – 7th c. AD, show that the mill machinery improved since the Hierapolis mil had been designed. The way how the saw blades were mounted and guided to cut Stone blocks into slabs remains subject to discussions among scientists.

When the archeologists found the remains of these gangsaws in Turkey, initially they did not know what they were and asked Mr Nihat Kömürcüoðlu, Civil Engineer, who owns the Turkish stone companies, Kömürcüoðlu Mermer and Traverten Mermer. Mr. Nihat Kömürcüoðlu, whose great passion in life is protecting the heritage in stone, understood the importance of the findings and, moreover, made the effort of building small models of these gangsaws on 1:4 scale, and proved that these are functioning models.

The well preserved remains of the Byzantine water driven twin stone saw mill in Hanghaus 2 at Ephesus, constructed by small pieces of wood, were discovered in the eighties of last century. In 2006 Fritz Mangartz, of the Römisch-Germanisches Zentralmuseum , Germany, first published a reconstruction of the based on extensive research on site.

The experimental sawing proceeded succesfully to a 10 cm deep cut with a progress of 6,75 mm/hr, i.e. almost 19.000 mm2/hr. Mangartz estimates that with 12 hour operation per day one labourer would produce about 330 square metres of slabs in a year. Mangartz concluded that the machine would produce twelve fold compared to manual sawing.

RECONSTRUCTION OF MARBLE SAW IN HIERAPOLIS

“On the right of the picture a large water wheel turned by running water. It can be seen that this motion is being forwarded to a gear pair (in the middle of the picture) and from here to saws which cut two blocks of marble in a linear movement with a con-crank mechanism. Today, such machines are called cut-rock.” 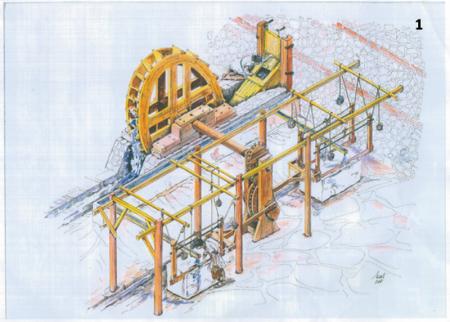 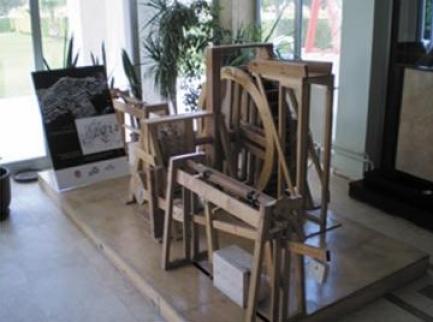 “…in the front, a wall of approximately 4 metres high and above it a water channel is seen. From here, it can be understood the gang machine ran with the water wheel. The shaft bearings of the water wheel have been done on two thick planks; the planks have been seated in their slots in the wall and the other ends have been fixed between two heavy blocks of marble.” 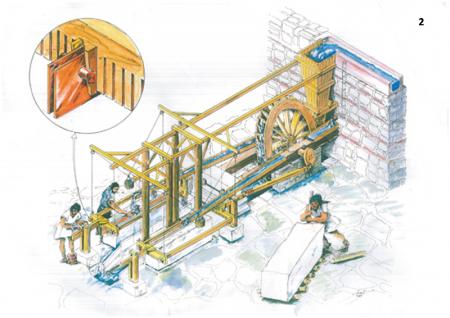 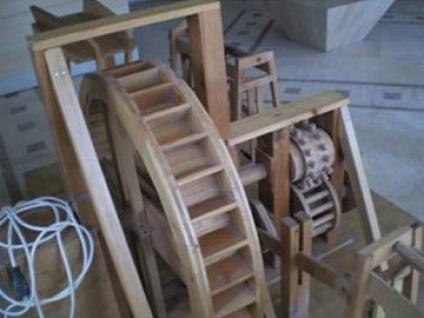 “Stone sawing machines of Roman times in the Anatolian Mediterranean”, by Paul Kessener

“There were Marble Factories in West Anatolia 2000 years ago”, by Prof. Suat Çakmak