Reconstruction of the eastern gateway of Great Stupa at Sanchi

Sanchi is a Buddhist complex, famous for its Great Stupa, on a hilltop at Sanchi Town in Raisen District of the State of Madhya Pradesh, India. The Great Stupa at Sanchi is one of the oldest stone structures in India, and an important monument of Indian Architecture.

At the end of 2022 an archaeological copy of the East Gate of the Sanchi Stupa will be erected in front of the Humboldt Forum in Berlin, Germany. The Bamberger Natursteinwerk Hermann Graser GmbH has been awarded the contract for this project. 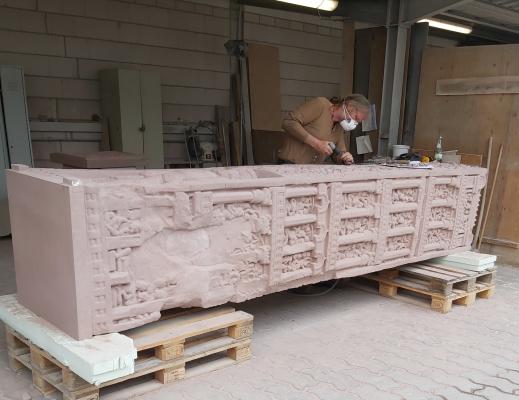 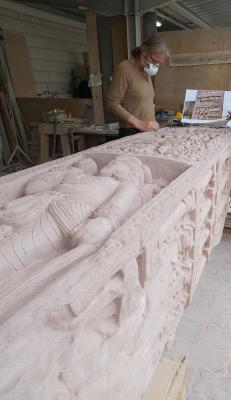 The project goes back to the founding directors of the Humboldt Forum, Neil Mac Gregor, Hermann Parzinger and Horst Bredekamp. The gateway is not only a kind of landmark of the National Museums, which can now also be experienced in Berlin-Mitte, but also a unique counterpoint to the baroque exterior façade of the partially reconstructed Berlin Palace. What is already inspiring on the inside of the Humboldt Forum will begin on the outside in the future.

But how will the East Gate of the Sanchi Stupa get to Berlin in the first place?

In 1869/1870, English archaeologists made plaster casts of the original Sanchi Gate in India at great expense. These plaster reliefs were purchased from London by the Museum für Völkerkunde Berlin in 1886 and are kept in an external depot, which belongs to the museum. In this depot the Bamberger Natursteinwerk scanned the approx. 104 plaster casts with a 3D-scanner and then assembled them in the computer as a 3D-model. The result was a digital twin of the East Gate of Sanchi as it was in 1869/1870. This digital data was then the basis for programming the robots of the company, with which they pre-milled the individual stones. Afterwards, the stones were finished by sculptors on the basis of photos of the plaster models, as well as of today's Sanchi Gate. 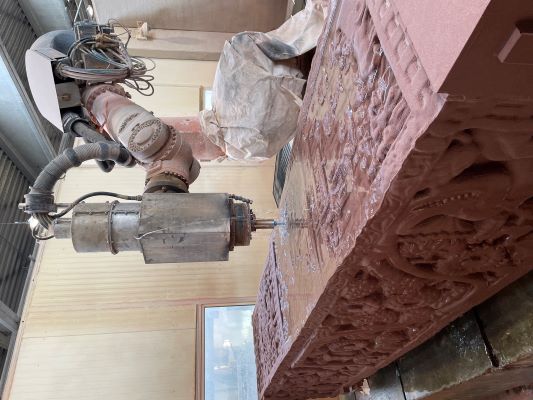 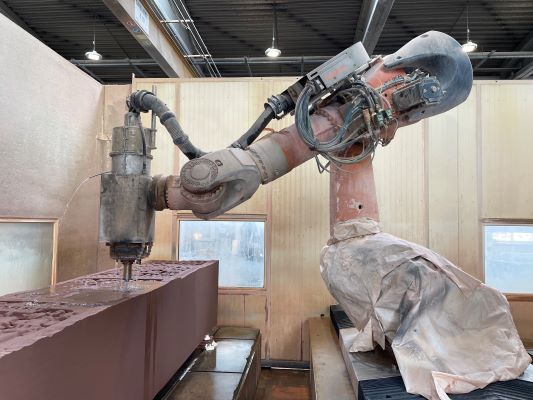 Robot pre-milling a pillar of the Sanchi Gate

For this archaeological copy the Bamberger Natursteinwerk used their “Roten Mainsandstein” a red sandstone from Röttbach in Lower Franconia, which is very similar to the original sandstone in India. Because of the different work steps, different people were involved in this project. This started in the technical department of the company, continued to the quarry and production and ended with the sculptors. At times, up to 10 sculptors were employed at the same time. 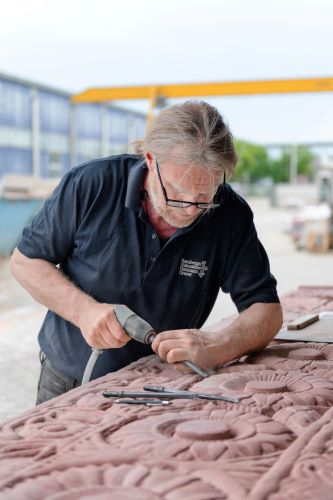 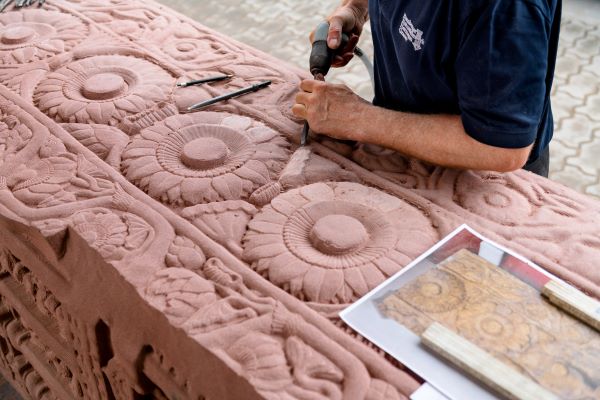 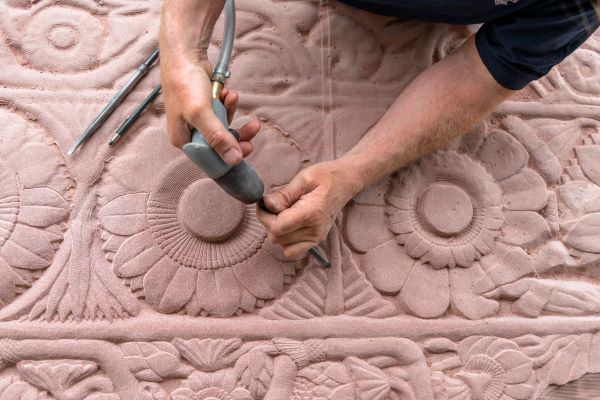 The construction of this important monument in front of the Berlin Palace had been closely coordinated by the client with the Indian Embassy in Berlin and is intended to draw attention to the exhibitions at the Humboldt Forum in the city and, in particular, to make it clear that the Humboldt Forum stands for the non-European cultures of the world. The Bamberger Natursteinwerk therefore considered together with the client that, due to the cultural significance of the Sanchi Gate and the high level of Indian sculpture, it would be a good idea to seek advice and suggestions from Indian sculptors for the sculpture work on this Indian work of art. The Bamberger Natursteinwerk then made contact with an Indian stonemasonry company, Trivedi Group, through the European Natural Stone Association Euroroc (European & International Federation of Natural Stone Industries), of which Hermann Graser is currently president, and was subsequently provided with two Indian sculptors as consultants for a certain period of time. It was wonderful how the sculptors exchanged knowledge and expertise across cultures and learned from each other. 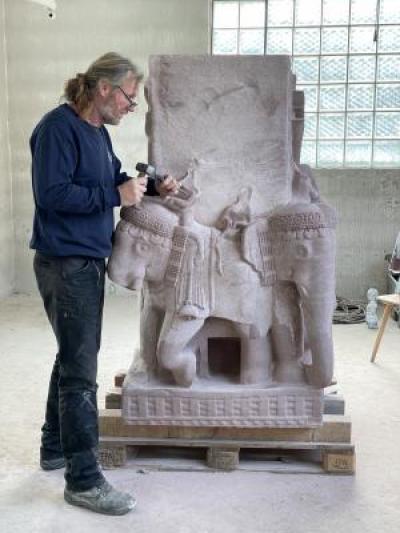 Sculptor of the Bamberger Natursteinwerk working on an elephant capital 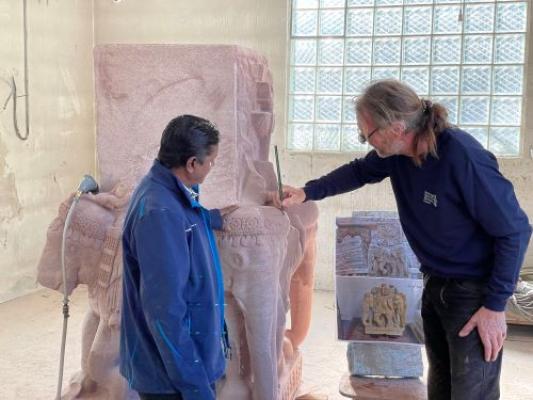 Now preparatory work already began on the construction site in Berlin and from mid-November, the archaeological copy of the Sanchi Gate will be erected on the Lustgarten side of the berlin Palace near Portal 5. The reconstructed gate consists of about 30 individual pieces that are transported to Berlin by truck and assembled on site.

This project is an absolute speciality due to the amount of filigree sculpture work involved and one big challenge for the Bamberger Natursteinwerk was to produce this amount in the short time available. 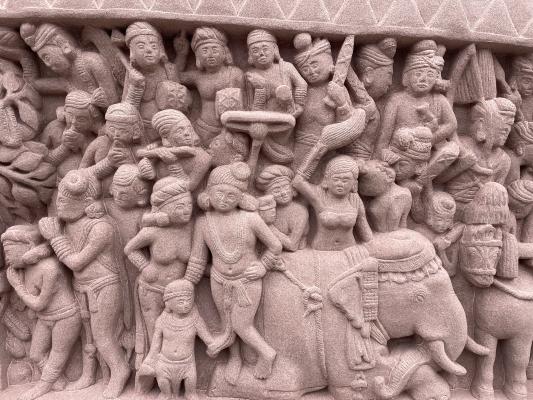 Details of the filigree sculpture for the Sanchi Gate