Raw Silk is in fashion! 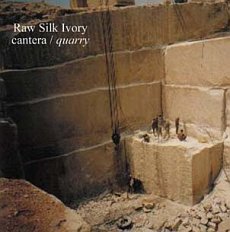 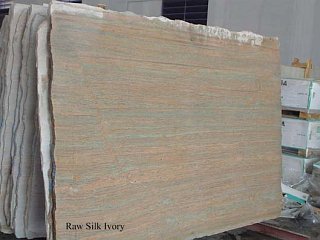 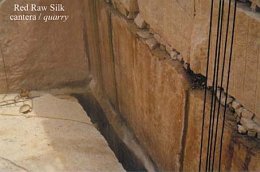 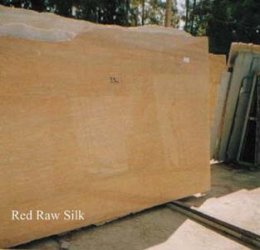 This is not Raw Silk from China to make exquisite fabric for the fashion designers of the world. This is the fashionable granite from India that the Chinese are fond of!

Raw Silk is among the most imported granites into China from India after Black Galaxy, Ruby Red and Tan Brown.

Raw Silk Ivory quarries are located in a village by name Varchur located approximately 26 kms. from Madurai city in the Southern State of Tamilnadu, India. Madurai city can be reached by flights from Madras (Chennai).

The Raw Silk Ivory is a material with Ivory background with no red or pinkish colours in the material. Raw Silk Ivory is quarried in 3 quarries. The production of Raw Silk Ivory is around 300 cbm per month from these 3 quarries. These quarries have been in production for more than seven years and are quarried from a depth of more than 50 m. This type of Raw Silk is exported in processed slab form to the United States & Europe. Rough Granite blocks of this type of Raw Silk is exported to Chine, Taiwan and Europe. The defects that are normally observed are of minute cut joints. It is sometimes difficult to overcome these defects while processing into slabs in spite of using resin.

Red Raw Silk is a type of Raw Silk with reddish tinge in the material.

Red Raw Silk quarries are located in a village by name Thiruvathur located approximately 30 kms. from Madurai city in the Southern State of Tamilnadu, India. This type of Raw Silk is quarried in more than 8 quarries. Approximately 600 cbm per month is produced from these 8 quarries.

The Red Raw Silk is more uniform in structure. However, there is quartz intrusion in some of the blocks which can be avoided while selecting the blocks.

More than 50% of the Red Raw Silk is exported from India to Europe. Local factories in India are also processing both types of Raw Silk for sale as slabs to the U.S. market. Most of the slabs are used in kitchen counters in the U.S. market.

Architects favour Raw Silk Granite due to its subdued light colour. Raw Silk is also known for its consistent pattern as seen in the photos of slabs.

The deposits in the quarries for both types of Raw Silk Granites that are in operation now should last for at least a decade. There are possibilities of more quarries being opened up if the demand goes up. The major quarries of Raw Silk are P.R.P. Granites, P.R. Granites, Madurai Granite Exports, Sindhu Granites, Surya Granites and Gem Granites.