Project of exploitation of quarries in Togo

Ornamental stones are usually associated with only a few well known countries, even though there are surely many other countries where commercially viable natural stone is found.  This article highlights the current state of the development of the stone industry in Togo.

Togo has a large number of unexploited deposits of marble, granite and other ornamental stones, and the mining operations have the potential to position Togo as one of the leaders in the African continent. The Spanish-French-Togolese company POMAR Togo SA signed an agreement in October 2010 with the Togo state with the aim of developing the potential of its industry of extraction and processing of marble.
The quarry of Pagala 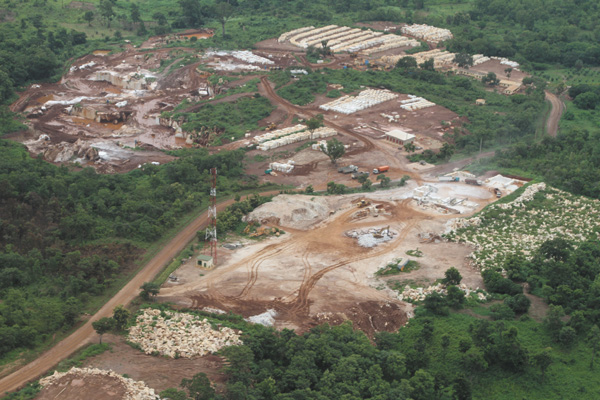 The quarry of Pagala is the first one in exploitation, as part of a project that has plans for opening a dozen quarries throughout the length and breadth of the country, and for all types of materials: white marble, black granite, red, yellow, serpentine, etc. It is, moreover, a quarry school, where the Togo workers are being trained in the different techniques and processes of extraction and processing.
The quarry is located about 270 km north of the capital Lomé, next to a village called Pagala. The current production work of blocks, crushed stone and tiles is centered in an area of approximately 40 ha. The total occupied surface is planned to exceed 500 ha, which includes strategic reserved areas, safety perimeters, access, housing, nursery and forest areas, etc.
Geological studies carried out by Pomar Togo S.A. have shown that the reserves exceed 120.000.000 tons of dolomite marble of good quality in white, beige and grey tones.
The current production capacity is approximately 1500 m3 of finished blocks, 10000 tons of monthly crushed stone products, planned 3000 to 5000 sqm of cut tiles and polished tiles. 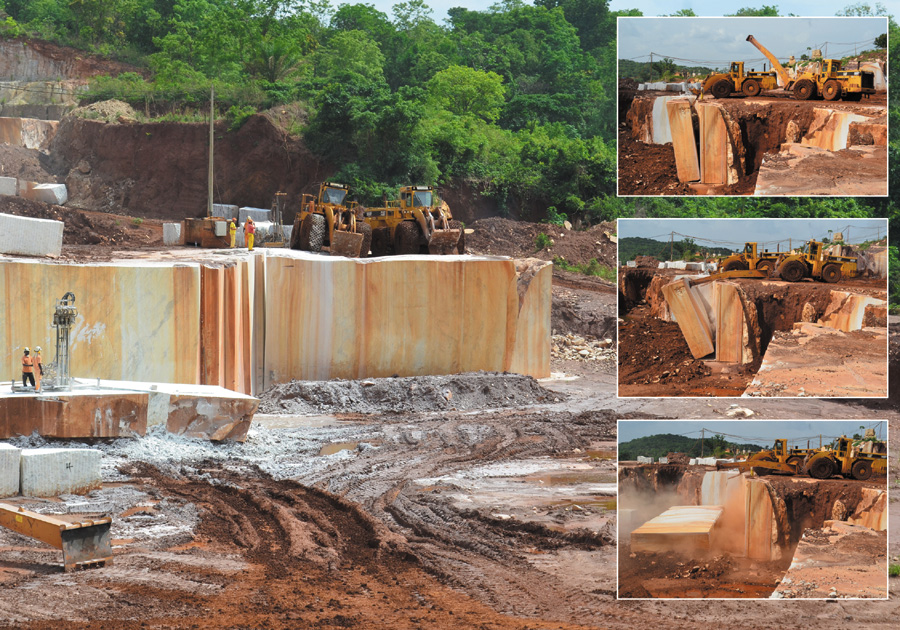 The productivity of the deposits for the production of blocks exceeds 30%. The sterile waste generated in the extraction process are used for the production of arid and crushed in a crushing plant installed in the quarry itself, so as to create higher value with the double objective of reducing waste and environmental contamination, and at the same time generate a sub-product with multiple applications.

There is no electric line passing close by so that the energy necessary is also being produced by means of independent electrogenous groups. It is foreseen that in a short period of time there will be production of energy by means of a base of means of interconnected electrogenous groups.
The people working in the quarry have diverse qualifications and are from different places. The 70 workers in the quarry are from Togo. The team for exploration and testing are formed by several qualified workers: two geologists from Togo and one technical engineer from Spain who coordinates the work. The team of workers for training consists of several Spanish workers with wide experience in the quarries and whose mission is to train the Togolese workers in the procedures and work techniques in the different areas of the quarry.

The management of the exploitation of Pagala is carried out by a Spanish technical engineer in mining who manages the entire team in the quarries as well as the coordination with the auxiliary services in the area and communications with the General Management and other services in the central offices located in Lomé.
The management of the project for the authorization of the exploitation is done by in a similar manner to that in Spain. A study on environmental and social impact, with declaration of favorable impact, is an indispensable requirement to obtain the authorization of mining. Once the project is on its follow up is obligatory, with trimestral and annual reports to the Ministry of Environment.
The quarry is in the phase of introducing a system of prevention of labor risks according to the norms OHSAS 18001/2007. The lack of infrastructure nearby obliges one to adopt a preventive model in which the entire management is done with own resources.
Currently a small cutting plant for cutting and polishing is also being installed in the quarry itself, which will help to supply the basic formats most used in the region.
Macro-project of factory
Apart from the exploitation of this quarry in Pagala, a macro-project for a factory is under way in the capital of Togo, Lomé.
The total surface of this factory is 51000 sqm, over a built surface of 15000 sqm. The production will be around 1.000.000 sqm ( 700.000 sqm of marble, 300.000 sqm of granite). The area of processing of marble will have 5 gangsaws, a resin line for slabs, a polishing line, and a cutting line for slabs and another for tile polishing. The area for granite processing will have 2 multi-wires, a resin line for slabs, and a polishing line slabs and a cutting line for slabs. The factory will have two bridge cutters and a specific area for funerary work with 2 CNC machines.
Currently the blocks are being sent for processing to Italy and Spain (Macael and Novelda) with the contact company for marketing being Mystone, based in Macael.
Pictures: POMAR Togo
Sections
Markets and Industry
We use own and third party cookies to improve our services and analyse traffic to our website. If you continue navigating, we consider you have accepted to their use. More information on privacy policy and cookies here. [CLOSE] Utilizamos cookies propias y de terceros para mejorar nuestros servicios y analizar el tráfico de visitas. Si continua navegando, consideramos que acepta su uso. Más información sobre política de privacidad y cookies aquí. [CLOSE]