The scientific name Porphyry, in the modern scientific classification of rocks, it is used only as a commercial term to indicate a volcanic rock with peculiar characteristics and susceptible to particular uses. The classic porphyry and trentine is the volcanic rock coming from the Italian region of Trentino- Alto Adige. 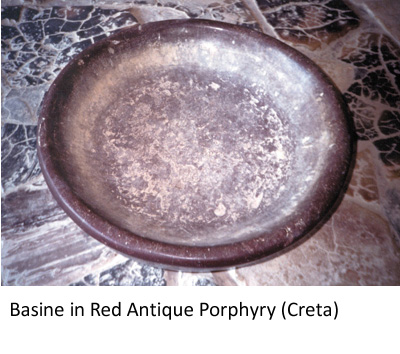 The name porphyry, which derives its typical colour similar to purple, was initially used to indicate a rock extracted in Egypt, known in ancient times as Imperial Red Porphyry or Ancient Red Porphyry and was extracted in the Egyptian desert in the mountain Jebel Dhokan (Kempe et al., 1983), which in ancient times was used for the elaboration of columns and vases, sarcophagus, busts, etc. The Romans, who called it “lapis porphyrites” or Roman stone, exploited intensely the quarries, using thousands of workers: the large number of works extended all over the Empire.

This stone has always had a great symbolic value, apart from aesthetic: the emperors, personifying divinity, lived surrounded by porphyry, they were born in rooms cladded with porphyry and many Roman emperors were even buried in sarcophagus made of porphyry.

Another famous porphyry of ancient times is the Green Porphyry, found in Greece, in the province of Laconia, close to the city of Sparta; it was also called Serpentine Porphyry. This porphyry is easily recognisable by the presence of crystals of light green feldspar in an olive green matrix.

These two porphyries are cited in the edict of Diocleciano (Blanco, 1999), the only document which indicates the price of “marble” not elaborated in ancient times. The red and green porphyry were the more expensive materials, reaching a price of 250 dinars per cubic feet (a foot is around 30 cm).

In more recent times the more famous porphyry is from Trentino, a volcanic rock which is extracted in the region Trentino- Alto Adige (Italy), characterised macroscopically by felsic phenocrystals immersed in a mass of red colour or pinkish grey. In the region of the meridian Dolomites, around 260 million years ago, there were important flow of lava (Brondi et al.1974) which formed volcanic rock on becoming solid, the steady characteristic of which is the presence of diverse fracture systems developed during the cooling of the lava and / or during the formation of the Alpine orogenic belt that conditions the natural splitting of porphyry in slabs.

In Trentino, the tradition of using of porphyry as construction material is old, be it in the form of walls or roofs. In pavements, the most ancient use is in the form of cubes substituted later by cobblestones. In the beginning of ninth century porphyry was commonly used in thick slabs for rest walls, kerbstones, roadsides. The rock is also known abroad in diverse typologies of finished products that currently include cubic stones, tiles, irregular slabs, steps, solid stone, etc., and moreover, for the elaboration of special jobs.

There are numerous varieties of Trentino, among which figure Porphyry of Val Camonica, the dark porphyry of Trentino, the grey and red from the Sarentine Valley, etc. At times the different chromatic varieties are mixed for use in pavements, where one can observe different kinds of finishes, from the natural to the polished, flamed or semi-polished. 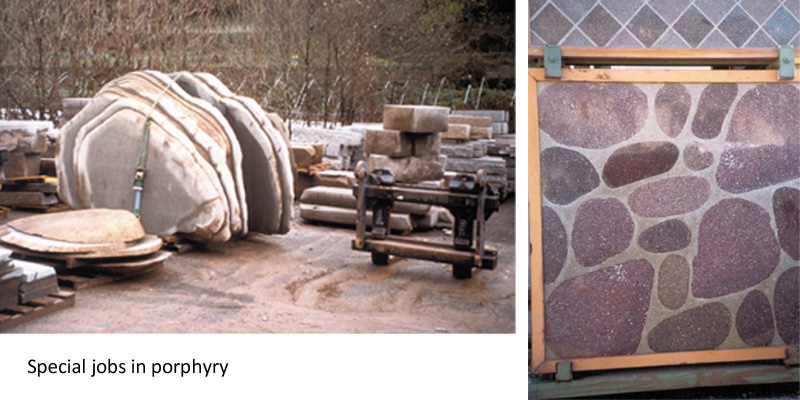 Another porphyry present in the market of natural stone is the red porphyry from Varese (Lombardy), a sub-volcanic rock of the Permian era. 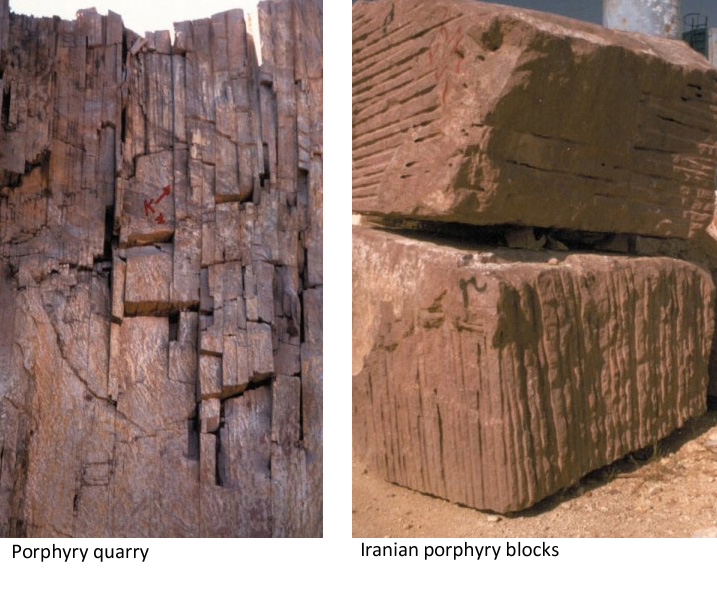 In recent years, in the porphyry sector, which up to now has been a typically Italian product, materials have appeared from outside Europe: on one hand the legal problems related to the environment in the extraction of this material in the provinces of Trento and Bolzano in Italy have limited the quantity of material extracted, on the other the evolution of the market towards a higher level of processed material (sawed, polished, semi- polished, flamed) has led to the searching in different parts of the world, with new and growing interest of the quarriers for blocks(Lanzone,1998). The new techniques of elaboration have made possible its elaboration both in Italy and in other countries and the market of these rocks is in continuous expansion.

The porphyry from other countries (Primavori, 1999), competing with the Italian, is represented basically by rocks extracted in Mexico, Iran and Patagon region of Argentina.

The Mexican porphyry is a rock of dark red colour with a typically porphyry structure, petrogaphically a ryolite.

The Argentine porphyry is found in numerous quarries in the province of Chubut (Patagon). In some areas the compactness of the material allows obtaining regular blocks. There are diverse varieties, in some dominates the red colour and in others the grey. Macroscopically they are volcanic rocks with small centimetres fragments of consolidated lava that creates its rocky texture. 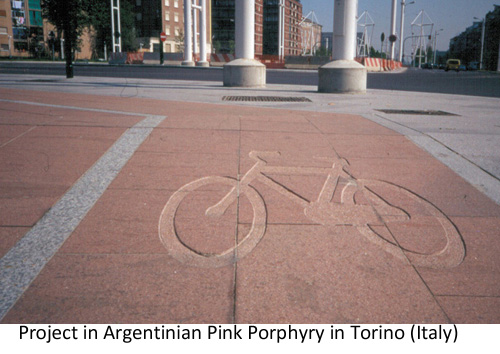 In the current international market of natural stone, there also exists another porphyry, which is a rock commercialised under the name of Verde Esperanza, proceeding from Peru. It is very distinct to other porphyries and is used above all as slabs with the surface polished or flamed. The petrography characteristics suggest an environment of sub- aquatic deposits with volcanic flow. The green colour seems bound to the presence of chlorite.

The porphyry from Iran is of red dark colour coming from the area of Yazd, in the centre of the country. 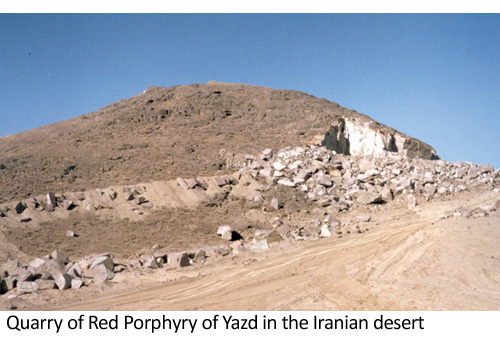 Laura Fiora is grateful to Dr. Marco Cosi for his inestimable collaboration in the investigation and to Dr Piero Primavori for the information and photographs related to porphyry from Iran.