The materials commercially known as Onyx are scientifically known as alabasters (or calcium alabasters) formed by deposits of calcium carbonate in water rich in bicarbonate, generally in cavities in solids of limestone stone. (...) The term onyx (which came from the Greek term which means “nail”) refers to two different types of rocks: the first is calcium onyx, object of the current article, and the second is a crypto-crystalline variety of quartz. (...) Both technical as well as aesthetic characteristics vary as a function of the direction of cutting: parallel to the level of stratification (transversal cut), this way a circular design is seen over a layer, or perpendicular (cut following the direction of the veins), in this case the sedimentary stratification is highlighted. (...) Currently the transversal cut prevails, because with this cut the characteristic of translucency is highlighted. 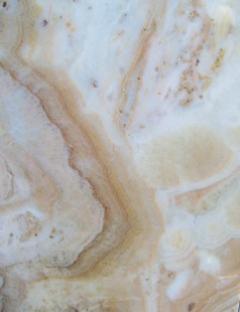 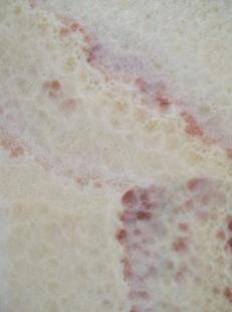 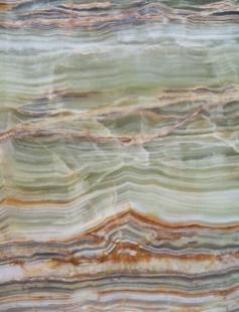 (...)A characteristic of the onyx is the presence of strips, owing to the fact that the levels of carbonate can have different colours, according to the concentration of the minerals and the impurities contained.(...)The most common mineral of “marble onyx” is calcite, followed by aragonite; other minerals frequently associated are clay and quartz. The colour is white or varied (beige, orange, brown, pink, red, green, sky blue, and yellow) due to impurities of the different chemical compositions. The colour of onyx is rarely uniform, thus in the same deposit there can be clear coloured materials alternating with dark or even brown or opaque white colour (variety least appreciated). The veins or brownish red spots are very frequent owing to the presence of iron oxide. 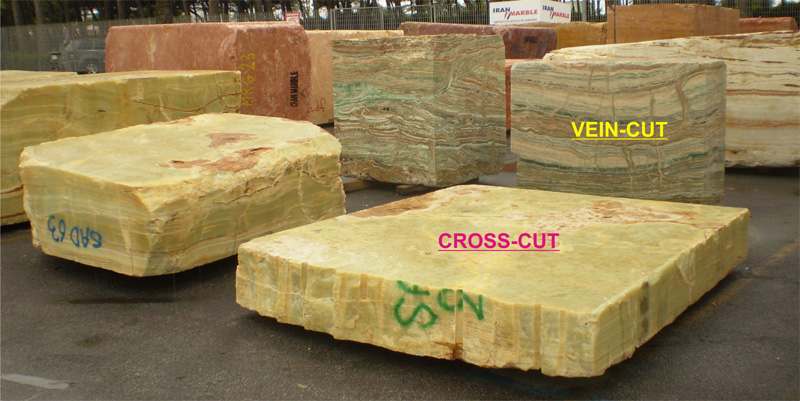 The onyx can be processed to thick cm slabs which, given the easy breakage, are often reinforced with artificial supports and with impregnations of epoxy resin. The resistance of the onyx to atmospheric agents is poor, therefore its use is more adequate for interiors without contact with humidity (kitchens and bathrooms) because even the relatively weak acids can destroy the material; currently the most extended use is in the form of a slab of 0.8 to 1.5 cm thickness and retro illumination (in this case the slab can be polished on both sides).
The most frequent use is in the elaboration of different objects: already five thousand years before Christ vases were made of it in Egypt. Tables, elegant counters, various decorative elements, chimneys, retro illuminated wall claddings are some other applications, apart from use in sculptures.

In the commercial names there is express reference to colours: White Onyx, Green Onyx, Orange Onyx, Pink Onyx, Red Onyx, Blue Onyx… The same name is used for materials from different places (green onyx is a commercial name used for materials from Pakistan, Mexico, Iran, Afghanistan and Turkey); historically they were called Apple colour, or Jelly colour. The commercial denomination can have reference to a place (Oran Onyx in Algeria or Evia Onyx in Greece), or to the country of extraction (Afghanistan White Onyx, Indian White Onyx); in some cases imaginative names have been given to onyx (Mandarin Onyx from Colombia, Fantastic Onyx from México). 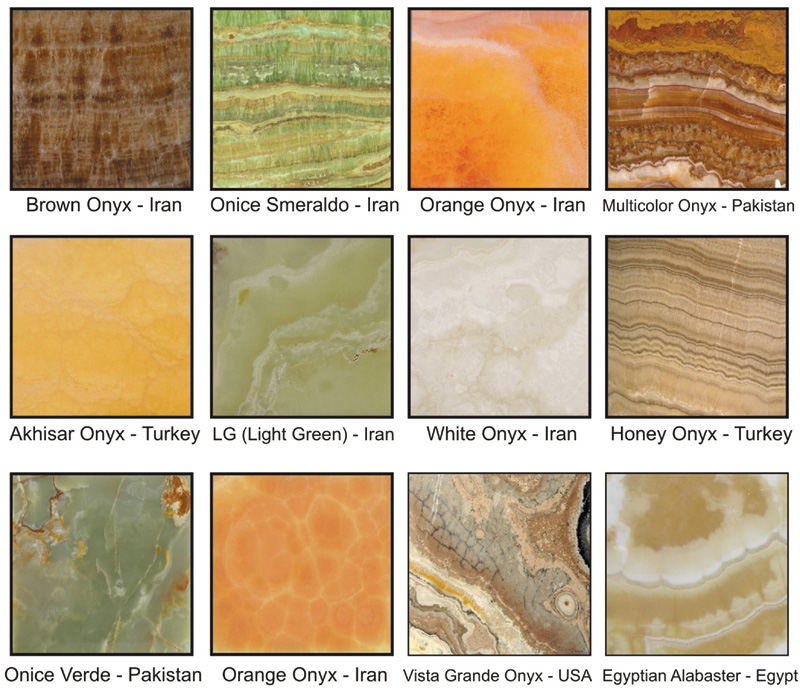 Onyx in the world

The age of the deposits of onyx tends to be recent (Pliocene and Quaternary), while the historical use is old. Plinius records of material extracted in Italy and Greece. In Italy, the most famous onyx are the ones from Sicily (Onyx of Quaternary, for example), from Lazio (Onyx of Circeo, of diverse chromatic variety, already known to the Etruscans), from Piedmont ( Onyx of Busca), from Campania (Onyx Gesualdo), apart from the denominated Stalagmite of Carso, and the onyx from Lumbardy coming from Bergamo. The onyx of Val Venosta was used locally and in Vienna. One also has to highlight the Tuscan variety (Onyx of Montalcino), while the denominated Alabaster of Volterra is composed of plaster.
In Europe the onyx can be found in several countries: in France (Stalagmite of Bedat in the Upper Pyrenees), in Spain (Onyx Málaga and Onyx or Stalagmite of Gibilterra, of historical importance), in Greece (Onyx of Crete, Volos Onyx, Evia Onyx), in Slovakia (Zlata Onyx, Spisske Onyx), in Croatia (Gorjan Stalaktit), in Portugal (Alabaster do Vimioso, Onyx Branco), in Albania (Lushnje Honey Onyx) and in Macedonia (Dorato Onyx).
The Turkish deposits are numerous (Yunus Emre, Tokay Yesil Onyx, Akhisar Altin, Cubuk White Onyx, Seben OnyxGul Balikesir, Rainbow Onyx, Sunshine Onyx, Grey River, White River), but in general the size is limited (for example, Demirci Onyx).
On the world level ,  the richest geographical area in deposits of alabaster are in Pakistan, in the district of Chagai, Iran and Afghanistan, in the provinces of Bamyan, Helmad and Faryab (fig.1 and 2). Especially popular Baluchistan; the term onyx of Pakistan is often wrongly used for different varieties of onyx coming from various parts of the world.
From these three countries come multiple commercial varieties; as an example one can name Pakistani materials such as Baluchistan Brown, Baluchistan Green, Onyx LG, Green Onyx Pakistan, Red Onyx, Gold Onyx Pakistan ; well known Iranian onyx are Naghadeh Onyx, Emerald Onyx, Persian Green, Damghan Green, Pink Onyx, Cappuccino Onyx; from Afghanistan comes Afghanistan White Onyx and Afghan Green Onyx.
The most important African countries regarding extraction of onyx are Algeria, Morocco, Egypt, Tanzania and Namibia. From Algeria comes the variety Oran Onyx, Onyx Nauge, and in the past the “onyx” of the ancient Roman thermal city of Aquae Sirensis; famous historical deposits are in the provinces of Oran (marble of Oran) and in Constantina (Red Onyx of Constantine); in Morocco they come from Onyx of Skoura, from Egypt they are the Onyx Oriental (Alabaster Cotognino, Alabaster Meleo), from Tanzania comes the pink coloured onyx and red African Sunrise, Songwe Onyx, Onyx Waves and from Namibia there is the variety Namibia Onyx, Daheim Onyx.
In the north and centre of America we can name several varieties from Mexico ( among them, the Onyx of Padrara, white/green with orange coloured veins, which is used a lot in San Diego, USA, the marble Tecali, the Oaxaca Onyx and Inca Onyx), and in Honduras, such as Monte Onyx and Juan and Cedro Onyx. Among the varieties extracted in the United States one can highlight Utah Onyx, Rosa Grande Onyx and Vista Grande Onyx.
From South America come other varieties of Onyx. In Argentine: Blue Onyx of Antofagasta, Green San Luis Onyx, Blue Onyx and other white varieties; in Brazil there is Nacarado Onyx, Macadame Onyx, Onyx Cile and Golden Onyx; in Colombia there is Mandarina Onyx, in Peru there is Cebrino Onyx and Onyx Fantástico, in Ecuador there is Onyx Zula.
Among the Chinese rocks are “Marble Onyx” of colour yellow/brown, commercialized such as “Butter Scoth” and the varieties Ice lake Jade, Crystal Red Onyx, Honey Onyx China and Golden Dragon Onyx.
From India come some important onyx such a Lilac Onyx, Indian White Onyx and Jhiri Onyx. Israel also extracts some varieties of onyx such as Tirat Carmel Onyx.

It is not easy to collect data regarding annual production of onyx. To give an idea, in the province of Baluchistan, the estimated production is 70748 tons in the year 2007.
Only a small part of the extraction of onyx in the quarry, a least in the main extraction area of the world, Baluchistan, is done in a mechanized way; most of it is done manually. For the extraction of the block black powder (gunpowder) is used and blocks of limited dimensions are extracted, both due to the geological flowering characteristics, as well the method of extraction used (excessive use of explosives causes fractures even in the “in-situ” part of the deposit), or due to the difficulty of mobilization, due to lack of ideal resources and big size blocks, rarely one gets blocks of standard dimensions. One of the main problems in the District of Chagai, for example, is shortage of water, necessary in large quantities in the work of extraction.
The world of onyx is, as one can see, vast and fascinating-and unending! It has been present in ancient civilizations everywhere- and is always in fashion!
July 2013
Sections
Understanding Stone
We use own and third party cookies to improve our services and analyse traffic to our website. If you continue navigating, we consider you have accepted to their use. More information on privacy policy and cookies here. [CLOSE] Utilizamos cookies propias y de terceros para mejorar nuestros servicios y analizar el tráfico de visitas. Si continua navegando, consideramos que acepta su uso. Más información sobre política de privacidad y cookies aquí. [CLOSE]