The Old Bridge in Mostar. Reconstruction of a Symbol

Eternity had only been interrupted. The Old Bridge in Mostar, which had been constructed in 1556, rose from the ashes in July 2004. This symbol for the bond between peoples and religions had been built under the assumption of everlastingness, but became a victim of the Bosnian war in 1993. This monument, which is also important regarding its architecture, was rebuilt under the direction of the UNESCO with the participation of the LGA (Regional Industrial Association) of Nuremberg (Germany)

It is the famous landmark of the town and, in many respects, a symbol. Stari Most, the "Old Bridge", for centuries not only has connected two town districts but also Christians and Muslims, the occident and the orient. And it has always been an architectural speciality. It has not become famous due to its width of four meters, which nowadays is not very impressing, and a length of 28 meters, but rather due to its daring arch at a dizzying height and its progressive construction method as a caisson bridge. When it was built in 1566 under the direction of the Turkish master builder Mimar Hajrudin, it was provided with the biggest self-supporting natural stone arch until then. 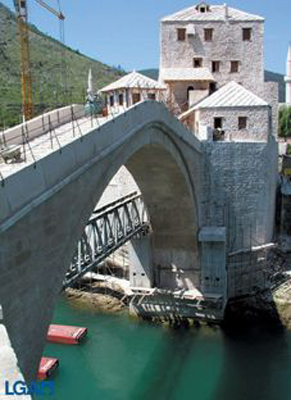 Many legends have grown up around the construction of Stari Most. When the first attempt to build a bridge on the friable rock edges high above the deep gorge was ended by the fall of the bridge into the floods of the Neretva, it is passed on, that the sultan in Istanbul had threatened to decapitate Hajrudin if the next attempt would be a failure, too.

That is why this time Hajrudin observed the removal of the scaffolding from a safe distance, well prepared to run away. According to the legend, the bridge still claimed its first life: the workers, which were left alone by their master, were so angry, that they walled Hajrudin's wife into the abutment, so that she should watch over the bridge forever.

The bridge didn't break down. In the course of time and the chaos of many wars it was damaged several times, but it survived all hostilities. Mimar Hajrudin had built his bridge to the end of time.

However, this end of time was terminated in the year 1993 during the Bosnian war. After all, for a long time it looked like the bridge would survive the war and the bombing: the houses of the ancient town centre were destroyed, the narrow streets lay in ruins, only the bridge was still existing, as if it wanted to defy all that.

The citizens had tried to protect it with tyres, built a makeshift roof over it with sheet metal and carpets, and in return the bridge protected everybody who dared to go this way to the only drinking water source. Stari Most had no military strategic importance at all, but it was a symbol and therefore it had to be destroyed. Two days and nights the bridge resisted to permanent shelling, until a traitor - people are saying that it was an engineer who once had worked at the bridge - gave the decisive hint to the enemy: he revealed the bridge's secret, its hollow interior. The well-aimed shooting of its hollow chamber finally made the bridge collapse. The stones fell into the Neretva and coloured the river blood-red. One can easily imagine the symbolic power of this phenomenon: "The war even makes the bridge bleed".

At the end of the war, Mostar lay in ruins. Therefore the question, whether the bridge should be rebuilt was not undisputed. Probably it was the bridge's symbolic character - the veto was unambiguous: everything should be as it was before the war.

The bridge of Mostar reveals its secrets

Let's restore everything as it was before: not only was it a strenuous way for the people in the harassed country but also for the multinational "Committee of Experts" under the direction of the UNESCO, which undertook the planning of the restoration, in which the "Landesgewerbeanstalt Nuremberg (LGA)" also participated, among others. "First we had to find out, what the special features of the monument were" said Gregor Stolarski, the leader of the LGA part in the team of experts. "During our extensive investigations we discovered extremely interesting features which internationally caused great response and often incredulous amazement".

First of all, it had to be found out, which kind of material had been used for building the bridge corpus. The arch, parapets and the front sides of the abutment consisted of a light, porous stone with a velvety soft and ivory-coloured shimmering surface. Under the microscope, the material had a structure which can be compared to fish eggs, which gave it also the name: Ooid limestone, made of individual, tiny limestone balls. They were formed by the sea around grains of sand and had hardened in the course of millions of years. This limestone, called Tenelija, is a rare and regional speciality from the region around Mostar.

For the flooring they had used a much harder, Dolomite limestone, which was laid staircase-like. The reinforcement of the banks was directly taken from the porous conglomerate stone (Breca) from the banks of the Neretva.

Hungarian divers recovered many of the stones which had fallen down into the river. At first they had to be assigned. This was not always easy due to the partly severe damages. Then it had to be decided whether these stones could be reused or new blocks of this rare stone had to be obtained from the quarries -if that was possible at all.

With the help of an "impact echo" method, the recovered stones were checked on invisible damages and cracks. The new ashlars from the Tenelija quarry had to be analyzed and catalogued, too.

Of course, the researchers wanted to know why the bridge had "bled" and they found it out: When the original flooring had been sealed, a pink mortar containing bauxite and a red brown alumina had been used. When the bridge collapsed, this binding material was washed out and it coloured the water. Up to now, nowhere in the world a comparable pink mortar has been found.

However, not only the building material of Stari Most is interesting, but also its architecture, as has already been hinted at. The most amazing feature of the old monument was its design, which was far ahead of its time and which caused this incredible resistance against the missiles, but finally also its downfall: In contrast to other comparable monuments of this era, the Mostar bridge is hollow inside. As Hajrudin designed the high parts close to the banks as hollow bodies, the weight could be reduced by more than 40 %. Nowadays this is the most common approach for reinforced concrete construction.

The connection of the stones among each other was also remarkable: four parallel, hand-forged strips made of clamps lined one after the other ran over the ridge of the arch, each of which had been inserted laboriously into the stone surface: the ends of the clamps were bent with an angle of 90° and widened in the form of a trapezium like a swallow tail. As they had been inserted in exactly chiselled pockets and fixed with liquid lead, these connections survived even the incredible forces of bombing and downfall. Further clamps at the vertical joints provided even more safety. For the joints, which were arranged in a semi-circle, Hajrudin used iron, hand-forged pins as third reinforcement. Following the curve of the arch, each pin had a different position, which was a great challenge to lead casting technology.

In the laboratory, the LGA staff reconstructed even the sequence of the historic building of the bridge and built a small part of the bridge wall on a scale of 1:4. Here they noticed how long it takes to make connections of this kind: in two steps, at first the clamp was fixed on one side of the next ashlar to be set and then the corresponding pockets were chiselled accurately into the previous stone. Finally a straight channel as thick as a finger was scratched into the surface from the pocket to the ridge of the arch and polished properly. As soon as the stones were assembled, the craftsmen filled the chambers with liquid lead, thus fixing the clamp ends.

"The detailed metallurgical and metallographical tests of the historic iron for the pins and clamps executed by us, show an enormous load capacity, durability and the function of this clamp-pin-connection" Stolarski says.

That is why this technology was also used for the reconstruction. On the basis of the traces which medieval stonemasons left on the stone surfaces, even old working tools were rebuilt. Thanks to stonemasons having special knowledge about the restoration of old stone, it was possible to reinsert many of the originally used ashlars.

The extensive LGA experiments regarding material analysis and material state, occurring loads and static tricks, amount of work involved and manual techniques were supplemented by analyses regarding the thermal effects of hot lead on the contact surface of the Tenelija and the influence of the saturation of the stones with water, so that the rebuilding could be carried out as successfully as it had been carried out formerly by Mimar Hajrudin and his workers.

The new bridge was equipped with sensors so that it supplied and still is supplying information about occurring tensions and deformations as well as about mechanical loads and weather factors, so that even in future many interesting findings will be provided.

Reconstruction of the bridge of Mostar as a symbol of peace

A chapter of history rose from the ashes with the Mostar bridge, which now has a further special meaning apart from its value as world cultural heritage: it is a memorial and symbol for a civil war in the very centre of Europe and expresses the hope for a (more) peaceful future. Thanks to an extraordinary international cooperation, it will be preserved for further generations not only as an architectural landmark.