Experts consider the Frankfurt Opera Tower to be the most spectacular German office building in years. After having done extensive research and technical investigations, the prestigious architect Mäckler and the building company Tishman Speyer favored a facade of natural stone to one of pure glass for reasons of energy efficiency. Because of its natural stone facade the Opera Tower received the coveted gold status of the LEED rating system of the U.S. Green Building Council as one of the first office buildings in Europe.

Developers, architects and users are becoming increasingly aware of the enormous consumption of energy that goes along with the construction and maintenance of glass facade systems. Politics and the media have focused on these issues various times. The Bavarian Supreme Court of Audit issued a recommendation in 2008 to use glass facades only in especially justified circumstances. Already in 2004 the German news magazine “Der Spiegel” (no. 47) pointed out that the necessary air-conditioning of glass buildings is responsible for skyrocketing energy costs.

The German Natural Stone Association (DNV), observing growing interest in energy-saving facades as an opportunity, carried out a sustainability study to assess the natural stone and glass facades in terms of their environmental performance. The consulting company PE International, a global player in the field, agreed to conduct the study.

The two-part study includes a complete life-cycle assessment of natural stone as well as glass facades, investigating the properties of glass and natural stone regarding production, use and recycling (End of Life). The study also compares different methods of facade construction in respect to their use of primary energy and their impact on the environment.

This study is based on the LCA-method (LCA – Life Cycle Assessment), which systematically analyses a product's effects on the environment during its entire life cycle (from the cradle to the grave). This includes the product's effects on the environment during production, during its period of use and during its disposal as well as upstream and downstream processes (e.g. raw materials and supplies).

The first part of the study analyses the environmental impact of two typical facade designs, carried out with natural stone and with glass, over a period of 100 years. One square meter of a back-ventilated natural stone facade with heat insulation on reinforced concrete is compared to a coextensive facade of glass mounted on a substructure of aluminium. 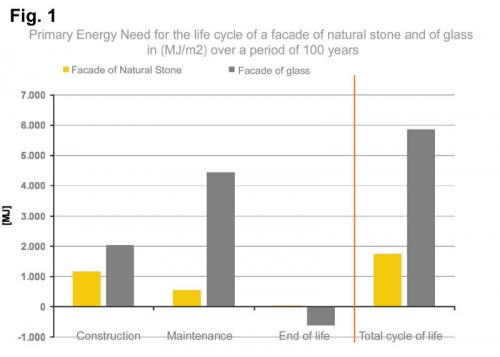 The environmental impact of glass facades is substantially higher than that of natural stone facades as well (see figure 2): 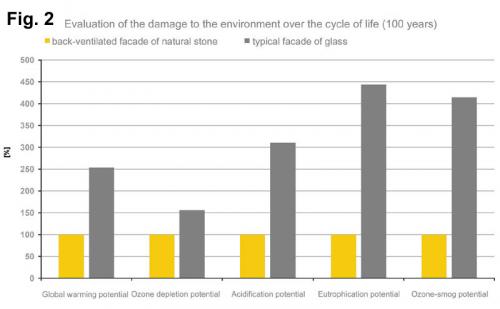 Part 2 of the study focuses on the following alternative facade designs using the example of the Frankfurt Opernturm given a period of observation of 50 years:

the actually built facade at the Opernturm in Frankfurt, which is composed of a unitized, back-ventilated facade of natural stone (17 %) according to DIN 18516-3 (33 %) as well as elements of glass (50 %)

Comparing the various facades alternatives in the second part of the study also demonstrates a notable ecological advantage of natural stone over against glass elements when considering the roughly 30,000 square meters of the entire facade area. The primary energy requirements of a glass facade (facade option 3) is more than two times higher than the one of an equivalent facade of natural stone (option 1 and 2, figure 3). 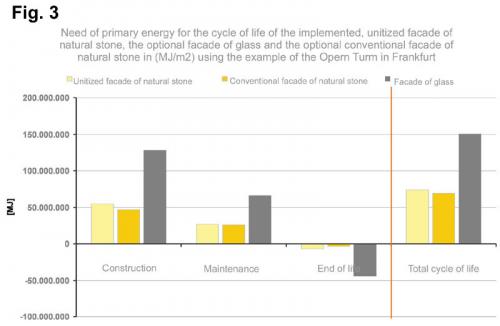 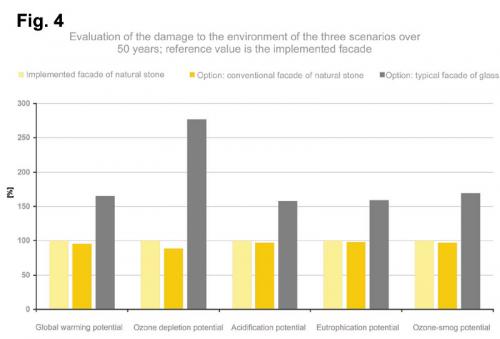 Facades of natural stone not only excel with regard to the environment, but are also highly cost effective: For instance, the heat transfer coefficient for a facade of natural stone is 0,32 W/m2, which is far below that of a glass facade with 1,25 W/m2. Because of the lower heat conductivity of the material, the heat requirement of buildings with natural stone facades are notably lower as well. Moreover, the negative economic and ecological effects of extensive glass facades due to heat loss in winter and the tremendous air conditioning necessary for cooling the building in the summer has not even been taken into account by the study.

Last but not least, the construction of natural stone facades is considerably more cost efficient than the erection of glass facades. Having investigated 20 facades, the Bavarian Supreme Court of Audit came to the conclusion that the investment costs rise proportional to the amount of glass used in construction. While perforated facades with a glass content of 35 % needed just 400 €/m2, glass facades with a glass content of 90 % required an amount of 1.280 €/m2. Each further percent of glass content added to the amount required by the usual perforated facade amounts to 16 €/ m2 including related costs (Construction index November 2006). Likewise the maintenance costs of natural stone facades amount to only half of the costs for maintaining glass facades. In addition, the yearly cleaning of the glass surfaces costs another 1.50 Euro per square meter on average. More specifically, the cleaning of perforated facades amounts to 1 €/m2 and of regular glass facades to 4 €/m2. Buildings with twin facades made of glass or with construction elements that are cleaning-intensive or difficult to access require yet higher cleaning costs.