Natural Stone exports of Turkey in 2019

Export statistics for the stone industry of Turkey for a particular year are one of the more reliable indicators of the state of the world stone industry, especially that of limestone and marble. The table below shows the country wide breakup of exports in 2019 for the twenty biggest markets and also the comparison with the year 2018. 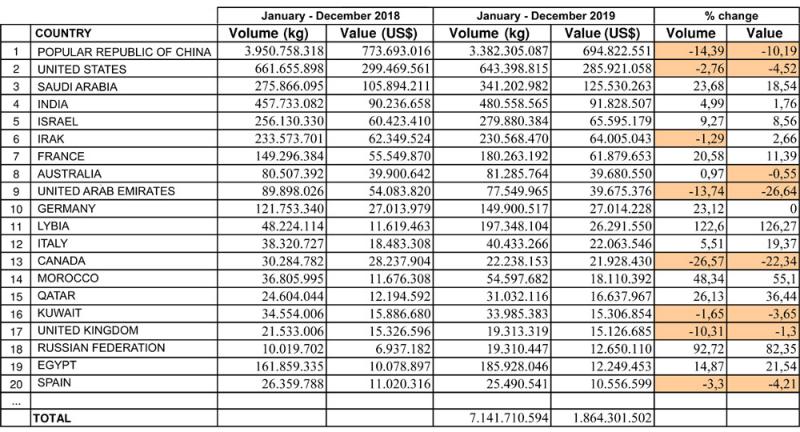 A few aspects stand out:

Exports to China, Turkey´s biggest market, probably all of it in blocks, declined by a fairly significant 10% in value and around 14% by tons- but some of this may well be due to a volatile Turkish currency last year which would have distorted the amount measured in US dollars. Overall it does fit in with what exporters of blocks to China were saying all year, that the Chinese market was sluggish.

Surprisingly, exports to USA, a booming economy during 2019, amounting to around US$ 285 million, and consisting almost entirely of processed stone, also showed a small decline, by around 4.5%, inspite of weak Turkish currency.

Another piece of revealing data: exports to Saudi Arabia, its third biggest market, showed an impressive increase by more than 18% year to year, reaching US$ 125 million, and even more impressive increase in tons, by 23%. This could be one indication of a rebound in construction industry in Saudi Arabia, though the lower per ton price indicates tremendous pricing pressure, Or does it mean that due to the difficulties encountered by exporters of stone from other countries due to greater paperwork required by the Saudi authorities, Turkey was able to fill the gap?

Exports to India remained stable at a very low level of US$ 91 million (when compared to almost US$ 695 million to China) during 2019 compared to 2018- which many will interpret as indicating how far India still is in terms of becoming the "next China", even when discounting the much higher import duties in India.