Laser scans of fractured surfaces in the restoration

For the first time in Europe a new technology has been used in a baroque castle in Aurolzmünster, Upper Austria. Without removing the original substance new and old parts of a staircase have been combined.

Reconstructions in the stone restoration work often use fragments of the original substance. In order to combine the new and old stones properly, the fractured surface of the old parts is removed to get a clean surface for a good junction of the stone. In this process it is inevitable the destruction of a part of the unique historic material. The modern preservation of historic buildings and monuments tries to avoid this destruction of historic stones.

In the baroque castle of Aurolzmünster in Upper Austria a new technology has been invented to keep as much of the historic stones as possible during the restoration of the banisters in the central staircase. In a joint venture, two stone masons, Norbert Kienesberger from Grieskirchen and Erich Reichl from Salzburg, reconstructed the multistory staircase with banisters combining the most sophisticated machinery with an instinct for careful restauration work. Norbert Kienesberger has specialised himself working with modern CAD-CAM machinery, Erich Reichl is working as a restorer of stone in Salzburg, Austria. After a planning period of six months they started working in summer 2003. In september 2004 the reconstruction was finalised. 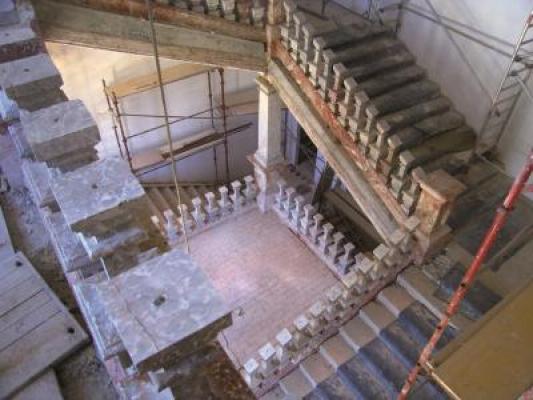 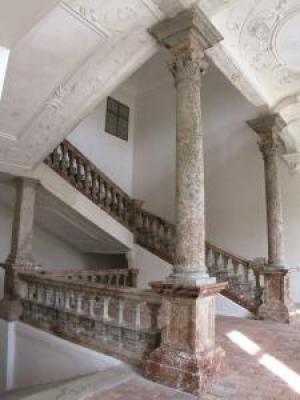 In 1705 the staircase has been manufactured using the two Austrian marbles Schwarzenseer and Adneter Scheck. Because of an inheritance dispute in the year 1920, the former owners of the castle removed the columns, pillars and pedestals, including the baroque marble banisters and replaced them with railings made of wooden boards. A group of expensive columns with capitals and pedestals had been replaced by wooden pillars as well. After taking apart a part of the banisters and railings were stored in a improper way in a stable, many other profiled pieces were used up in buildings in the neighborhood. Only an accumulation of fragments remained in the castle. Regarding the importance of the castle, the condition of the staircase was very unsatisfactory for the recent owner in this provisional state. Looking for a appropriate solution, he was offered new banisters of concrete. Another proposal was Italian marble. At this time Norbert Kienesberger and Erich Reichl were called to find a solution. After an expense budgeting and a feasibility study they decided to reconstruct the banisters using as many of the historic stones as possible without loosing the original substance of the fragments. A photograph of 1900 was used as model for the design. 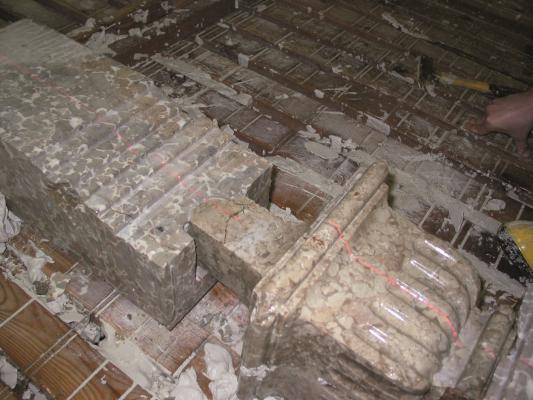 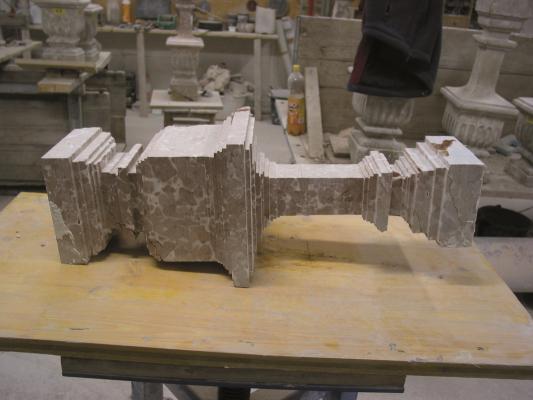 The concept was discussed with the authorities of the preservation of historic buildings and intended to keep the fractured surfaces of the fragments instead of removing them for a better junction. The interstices between the old and new parts should be manufactured with a tolerance of less than a tenth of a milimeter by making use of laser scanns and CNC machinery. Erich Reichl calls this method “Digital Fractured Surface Scan“. For a long time he wanted to realize it on a restoration project. Norbert Kienesberger became the ideal partner, because he got the technical know-how on a multi-axis working centre with laser scanner. In addition to that Kienesberger is the leaseholder of the Schwarzensee marble quarry, from which a part of the original stones had been extracted.

The course of the project

The project began with a puzzle, because all pieces and fragments were brought to the workshop of Erich Reichl to Salzburg to be arranged and measured properly. The results were collected in a CAD plan. A third of the banisters were lost. Approximately 30 percent of the banisters existed, but were in a bad condition. The pieces suffered fractions by the taking apart and, above all, by improper methods of transportation and storing. In another 30 percent of the banisters the middle part existed, but without capitel and postament. These were the pieces where the Digital Fractured Surface Scan was applied. The columns with nearly all capitels and postaments existed. A massive pillar could be found later. Some pieces of the staircase and the railings had been used in buildings around the village of Aurolzmünster and could not be used for the reconstruction, but could be used as models for the reconstruction of new parts. 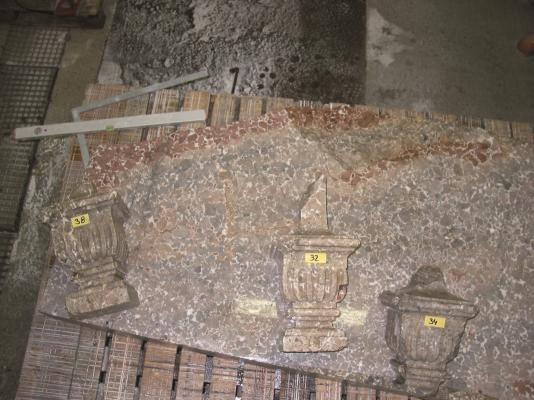 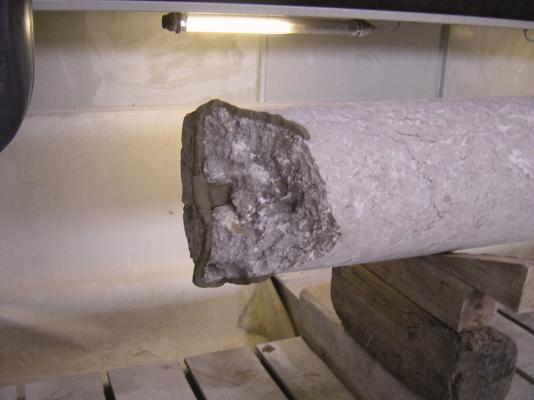 The use of all existing fragments and the combination of old and new stones without a further loss of original stone material had the highest priority during the whole project. Despite an inevitable, slight difference of colour between the old and new parts, the new ones had to fit harmonically into the whole appearance of the staircase. A big advantage was that both of the historic quarries were still in use. Because of that matching blocks could be found regarding colour and texture of the original stones.

Adjusting of the fractured surfaces

In his workshop Norbert Kienesberger scanned all surfaces with a laser scanner on a Breton CNC-working center. The highest emphasis lay on the quality of the edges of the fragments. Because they had to fit perfectly, Kienesberger set the tolerance of the scan to 0,3 milimeters. In the perceptible areas of the fractured surfaces Kienesberger aimed at a more precise scan than in the middle of the surfaces. Afterwards the data of the scans were processed on the computer. First of all the huge amount of data had to be reduced to a reasonable size. Here they invented a special program. In the next step the inner parts of the surfaces were moved backwards one milimeter by the programm, in order to keep enough space for the glue. 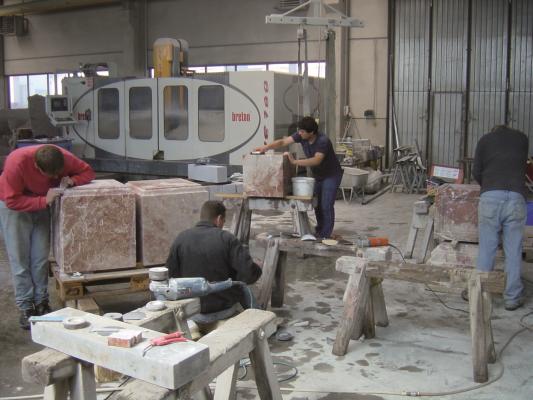 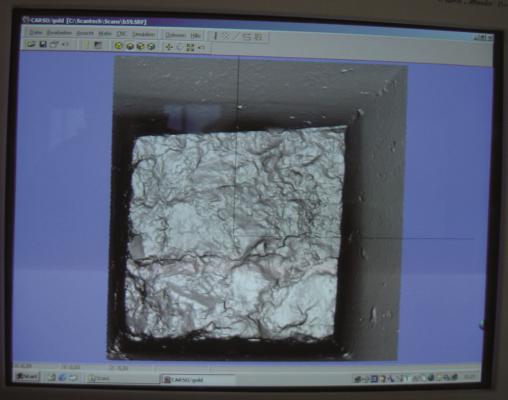 Erich Reichl says that the new technology was applied with good success. For him the field of applications of this technology could be on damaged columns on the outside or at restauration works on floorings in churches. Regarding the high costs, it depends on the individual situation of the monument or building. Specially in the restoration and preservation of historic buildings and monuments it can be of great help, because in this field the use of historic materials and the preservation of the original fragments are very important.