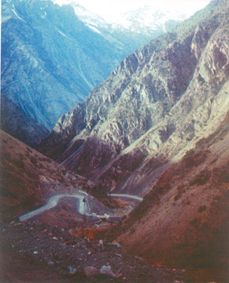 A Central Asian country of great natural beauty and proud nomadic traditions, Kyrgyzstan shares borders with Kazakhstan, Uzbekistan, Tajikistan and China. It is the farthest eastern Central Asian republic of the former Soviet Union. With an area of 198.500 km2 the landscape is rugged and mountainous - the average elevation is 2.750 m and almost 90% lies more than 1.500 m above sea level. Most of the 5 million or so population live in the valleys of the north and west. Agriculture (chiefly livestock farming) is the main activity. Kyrgystan has one of the largest proven gold reserves in the world. Other important natural resources include abundant hydropower, significant deposits of rare earth metals, nepheline, mercury, bismuth, lead and zinc, and locally exploitable coal, oil, and natural gas. Decorative stone reserves will be discussed at length later on. Manufactures include light machinery, metals and food products.

After seven decades of Soviet rule, Kyrgyzstan emerged as an independent state in August 1991. Since then it has been the most progressive country in Central Asia enacting market reforms, and adopting democratic principles. Kyrgyzstan was the first CIS country to be accepted into the WTO. GDP growth was 6% in 2003. However an estimated 50% of the population lived below the poverty line. President Askar Akayev and his government are addressing this and other problems.

Stone implements found in the Tien Shan mountains indicate the presence of human society in what is now Kyrgyzstan as many as 200.000 to 300.000 years ago. Several hundred years ago, decorative stone was used to a limited extent in important buildings in Osh, Kyrgyzstan´s second and oldest city, and elsewhere.

On 01.01.2003, according to official sources, 165 deposits and manifestations of facing and decorative stones had been recorded by the Kyrgyz authorities and classified as of magmatic, sedimentary or metamorphic origin.

The first group includes granitoid deposits situated mainly in the northern part of the country and associated with Caledonian intrusions of the North Tien Shan folded system, a component part of the Urals-Mongolian geosyncline belt.

Effusive varieties are represented by porphyrites, porphyries, diabases, picrites and other rocks. This group of decorative stones is found mainly within the confines of the Kyrgyz, Talas and Chatkal mountain ridges, and the northern foothills of the Alai and Terskey-Ala-Too ranges.

The present and future outlook

Of the 165 deposits and manifestations of decorative stone officially registered in Kyrgyzstan, 10 have been evaluated in detail, 6 to a considerable degree, and the remainder to a lesser extent. There are thought to be 68 highly promising sites, 30 of which are in northern Kyrgyzstan. In mid-2004 only three deposits were being worked in a regular, stable manner.

Concerning rocks of sedimentary genesis in the district, there are the limestones of Ichkeletau sector with estimated reserves of 21 million m3, and the decorative conglomerates of Dzhargart-1 with an estimated 12 million m3 of reserves.

The principle type of decorative stone worked by processing factories in Talas district is of metamorphic origin. The Ichkeletau group of marble deposits - Chaartash (Fig 2), Talas, Gulderek (Fig 3), Svetloye and Tashkoro - are of the greatest practical significance. The estimated reserves in this group of marble deposits, combined with the granitoid rocks at Kaindinskoye, situated 10 km to the north of a stone processing factory, could acquire great significance in the future.

The light blue-green marbles from Dzhargart (Fig 4) with estimated reserves of 90 million m3 are a promising resource.

Reserves of magmatic decorative stones in Ysyk-Kol district could be increased in the future through additional study of granite shows at Bokon-bayevo and Vostochno-Ysyk-Kol, where estimated reserves are considerable. In Ysyk-Kol district there is the Ak-Ulen deposit of highly decorative bluish-grey and pinkish-grey syenites, individual irising varieties of which are similar to the Spanish syenites " Azul Aran".

Regarding stones of sedimentary genesis in Ysyk-Kol district, reserves of the decorative conglomerates of Lower Carbonaceous age at Karator have been estimated at 4,3 million m3.

As regards rocks of metamorphic genesis in the south of Kyrgyzstan, the white marbles of Akart, Abshir, Aksu, Ravat and other locations are of considerable practical interest. Magmatic rocks deserving further study include granites at Misken with estimated reserves of 2 million m3, Kochkorata - over 5 million m3, Kainama - 5 million m3, Koksarekskoye - 1 million m3, and other locations. Unusual varieties of decorative stone include the green variegated granitoids at Kyzyl-Kungei, the black picrites at Nadirskoye, the gabbroids at Zarkarskoye and Sartolinskoye, and the pyroxenites at Kachala.

In Naryn district, variegated syenites of Permian age within the Ortotokoi syenite massif and found at Arsy and Kyzyl-Ompul merit special attention. Of practical interest is the north-western sector of the Kyzyl-Ompul deposit where reserves of giant porphyritic syenites have been estimated at over 15 million m3.

In Osh and Jalal-Abad districts, a complex of sedimentary formations offers the best possibilties for decorative stone extraction. An increase in the recovery of shelly limestones has been possible for many years.

Kaindinskoye, granodiorite & granite - Talas district
This source is situated in Manass region, 50 km from Dzhambul railway station and 390 km from Tokmak Stone Processing Factory, at a mean height of 1300 - 1370 m. Two sectors are worked, situated 150 - 200 m apart. The first sector comprises light grey granodiorites (Fig 1,a), the second sector is made up of grey and pinkish-brown granites (Fig 1, b and c). Licences for working both sectors are held by GAO Kyrgyz-Too-Tash (Tokmak) and OOO GRANIT (Bishkek).

Kyrtyvalga, granite - Chu district
The Kyrtyvala deposit is in Keminsk region, north-west of Ysyk-Kol and 60 km east of Tokmak, at an absolute height of 1400 - 1530 m. An asphalt road from Tokmak to the village of Ak-Tyuz passes within 2,5 km of the deposit. This consists mainly of medium- and coarse grained sub-alkaline leucocratic granites of pinkish-grey, pink, or brownish-red colour (Fig 5). The possibilities for extending the site are practically limitless. This deposit is not being worked at present. The hydro-geological conditions at the site are favourable.

Gulderek, marble - Talas district
The Gulderek coloured marble deposits are to be found in Bakai-Atin region, 4 km north of Ming-Bulak village at an absolute height of 1110 - 1255 m, and 45 km from a railway line. The marble formations extend to 170 m depth. The mainly medium crystalline marble is banded and may be of various colours - light grey, grey, greenish-grey and dark grey, grey-green, and variegated (Fig 3). All the marbles from this source take a mirror polish. The deposits are currently being worked and provide a raw material base for the Tokmak Stone Processing Factory in Tokmak and the Ivanovsk Stoneworks, also in Tokmak.

Chaartash, marble - Talas district
The Chaartash deposit is in Bakai-Atin region, 7 km north of Klyuchevka village at an absolute height of 1630 - 1765 m. The distance to Tokmak Stone Processing Factory is 423 km, and it is 81 km to Dzhambul railway station. The formations being worked are fine crystalline, variegated pink, black, creamy-grey banded marbles (Fig 2). The deposit is being held in reserve - it is fully prepared for quarrying.

Aralskoye, granite - Talas district
This source in Talas district is just 45 km from a railway line. The stone is a medium grain grey granite. Reserves are in excess of 20 million m3. Blocks comprise 40% of the material extracted.

Akart, marble - Osh district
This source of white marble is in Naukat region, 30 km south of the hamlet of Yangi-Naukat, at an absolute height of 2700 - 2880 m and 35 km from a railway line. This is a coarse grain, dense white marble - the seam is around 90 m deep. The deposit is prepared for quarrying.

Ak-Ulem, syenite - Ysyk-Kol district
This deposit is 18 km from a railway line. The syenite is medium grain, porphyritic, highly decorative, grey and pinkish-grey. There are 1,3 million m3 of reserves. The yield of blocks from the rock mass can be up to 65%. Some irising varieties are analogous to the Spanish syenites " Azul-Aran ". The quarry is worked from time to time.

Sary-Tash, shelly limestone - Osh district
This source is in Uzgen region, 80 km east of the city of Osh, at an absolute height of 1940 - 2200 m. From the deposit to the main Osh-Uzgen highway is 35 km, it is 70 km on a gravel road to the nearest railway station at Karas. There are three layers of the shelly limestone totalling 13,2 m in depth. The material can be brownish-yellow or yellowish-white in colour (Fig 6), with an appearance similar to walnut wood. It can be polished to a glossy finish. This deposit is worked by the company AO Osh-Ak-Tash of Tokmak.

These marble formations are found in Toktogul region, 28 km from the town of Toktogul, at an absolute height of 1460 - 1700 m. The Bishkek - Osh highway passes within 100 m of the site, it is 155 km to Tashkumyr railway station on the Central Asia line, 200 km to Karabalta station on the Kyrgyz Railways line, and 324 km to Tokmak Stone Processing Factory.

There are two sectors of this deposit, Arym-I and Arym-II, situated 200 m apart. The marble is intersected with microdiorite dykes. Arym marble comes in grey, light grey, bluish-grey and greenish-grey colours with a spotted, banded or homogenous texture (Fig 8). This source is worked by GAO Kyrgyz-Too-Tash company.

All the deposits described above are in favourable geographic locations, and can be worked by standard quarrying methods. Of these 9 deposits with adequate reserves for long-term working, only three are continually operated at the present time - Kaindinskoye, Arym and Sary-Tash. The Gulderek coloured marble and Akart white marble quarries are worked irregularly. Some deposits - Ak-Ulem, Bozbutoo and Chaartash - are worked intermittently by local companies. The remaining sources have been prepared for quarrying and are being held in reserve. In Kadamzhai region there is a small quarry of coloured marbles (Fig 10) at Tashbolot. The firms OOO Granit and GOK Dzhamgyr Resource (both based in Bishkek) also extract blocks intermittently from Kyrgyz quarries.

The Tokmak factory produces slabs, tiles and memorial products. This factory is equipped with Soviet and Italian machines (delivered between 1976 and 1982) which are practically worn out. The current annual production of slabs is: granite - 10.000 m2, marble - 25.000 m2, and limestone - 30.000 m2. Due to a lack of orders, the Tokmak factory only works one shift a few days a week.

Considering the ancient traditions of stone use in Kyrgystan, and the very considerable resources as outlined in this report, it is to be hoped that the decline in production will be arrested in time so that the Republic can take its rightful place amongst the decorative stone producers of the Commonwealth of Independent States (CIS).

*Abrigded version of a report published in Imperiya Kamnya (Empire of Stone), September 2004 issue and translated from the Russian by Paul Daniel.