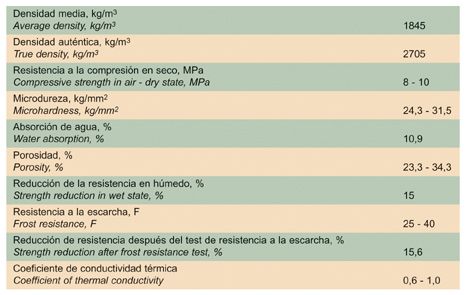 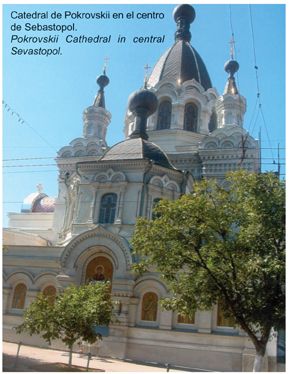 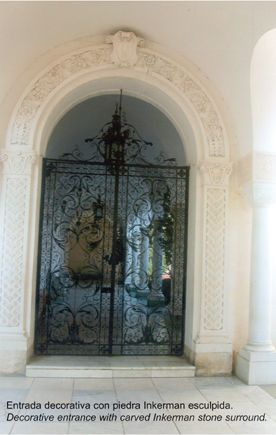 Everyone who visits the Crimea falls in love with the region. Impressions of this virtual paradise are, in the author´s opinion, based on three main constituents - the warm, bright blue sea, the picturesque mountains, and the famous white stone which is still quarried today.

The Crimea is a peninsula on the northern shore of the Black Sea, part of the Ukraine but with a significant ethnic Russian population and today an autonomous region. In the Crimean War of 1853-56, Russia fought the combined forces of Turkey, Britain, France and Piedmont here. The Inkerman ridge, subject of our report, was in 1854 the site of fierce battles between British and Russian forces. It was then and remains now the source of a remarkable white limestone.

There is a lot of limestone in the Crimea: around 80 sources have been registered, more than half of which contain good quality dimensional stone. They are not found everywhere however - most sources are to be found on a plain in the north-west of the peninsula (from Saki-Yevpatoriya to Rozdolny), in the south-west within the boundaries of the second ridge of the Crimean mountains (from Sevastopol to Simferopol), and in the east on the Kerch peninsula. The range of decorative varieties is extremely broad: from yellow, porous shelly limestones to brownish-rose polishable breccia. Out of the very wide range one particular variety stands out - the snowy white oolitic limestones found in outcrops in Inkerman region and in a sinuous band running for more than 50 km along the second ridge of the Crimean mountains, initially in an eastern and then in a north-west direction as far as the River Alma. This stone contains tiny fossilized sea organisms which lived at the very end of the Cretaceous period. It is widely known as Inkerman stone. Due to its decorative appearance and excellent mechanical properties, Inkerman stone has a centuries old tradition of use.

The source near Sevastopol is one of the largest of its type. It is situated 1 km from Inkerman-II railway station on the Dnieprovsk regional line. The source has two sectors - Tsygansk and Pervomaisk. The typical topography of the region is illustrated in Fig 1. The Pervomaisk sector is generally considered to be the more important, with reserves calculated at around 4 million m3: it runs from west to east for up to 1200 m and is 300-500 m wide.

The Pervomaisk limestones are of Lower Paleogenic age and were deposited in shallow freshened seawater populated by a lot of fauna. The layered beds permit a high yield (up to 60%) of walling blocks from the rock mass. Not far from here is the Inkerman-II deposit with reserves of around 10 million m3.

As many tests have shown, Inkerman limestone is eminently suitable for use as walling stone and cladding, meeting the specifications of the former USSR State Standards GOST 4001-84 and GOST 9479-98. In terms of mineral composition it is practically pure calcite (97-99%) plus 1-2% quartz. The main physical and mechanical properties as measured by three competent but independent laboratories are: (see table)

In A Guide to the Crimea published in 1914 in Simferopol, we read "The main building material in the Crimea is limestone, of which there are several varieties. So-called Inkerman stone has been widely used for the rebuilding of Sevastopol. It has been extracted since ancient times and was exported even to Rome". Inkerman stone was apparently known to the inhabitants of ancient Khersones (500 to 100 bC) to the south of Sevastopol, and in the ancient Greek town of Feodoro (Dori) on the site of the present day city of Inkerman. Legend has it that Emperor Trajan banished Pope Clement I here to work in the quarries, where he died a martyr. In those far off days, as in more recent times, extraction was carried out underground. Indirect evidence of underground workings are the entrances to galleries and caves, partially hidden by undergrowth on the steep mountain slopes (Fig 2). Centuries later, quarrying increased significantly - at the end of the 19th and beginning of the 20th centuries, mainly due to the development of Sevastopol.

In 1890 the city was officially designated the main base and fortress of Russia´s Black Sea fleet. The fleet´s headquarters were transferred here from Nikolayev. This precipitated much building work, with extensive use of Inkerman limestone. The white stone was also transported to many Crimean towns and villages. One example is the Grand Livadia Palace on the slopes above Yalta (Fig. 3). Built on the site of an old imperial palace, it took 17 months to build from April 1910 to September 1911. For a short period it was the summer residence of Tsar Nicolas II. In February 1945, Joseph Stalin, Winston Churchill and Franklin D. Roosevelt met here to decide the fate of the post World War 2 world and the division of Europe.

World War I and the civil war and revolution in Russia resulted in a complete cessation of walling stone quarrying in the Crimea - all quarries were abandoned. In the 1930s extraction recommenced, prompted by a resurgence of house building and civil engineering projects. Mechanisation was introduced into the quarries, including chain saws developed by local inventors. World War II halted this renaissance. The post-war period naturally required a vastly increased volume of building materials. A significant increase in dimensional stone production was only possible through a fundamental modernisation of quarrying. New specialized machines began to appear in the Crimean quarries, made in Baku, Leninakan, Moscow and Simferopol. The radical modernisation transformed the Inkerman workings from a series of small "diggings" into a large mechanized mining concern with a productivity several orders of magnitude higher than earlier. Production of large walling blocks at Pervomaisk quarry before the break-up of the USSR peaked at around 55.000 m3 / year.

The two traditional products of the Crimean limestone quarries were and still are: walling stone in the form of a rectangular parallelepiped with dimensions 330 x 190 x 188 mm or 490 x 24 x 188 mm, and large walling blocks (64 specifications) with a total length of 980-3020 mm, height of 820-1000 mm and width of 300-500 mm. The use of limestone walling blocks in the Crimea and in surrounding regions (especially for rural buildings) greatly alleviated chronic shortages of other building materials, and has proved to be much more cost effective than building with locally made red bricks. With large wall blocks, labour costs are reduced by a factor of 3, consumption of mortar and plaster is much reduced, whilst the rate of construction is 2-2,5 times faster.

The enhanced quarry production capacity meant that Inkerman limestone could now be supplied not only for various local public and private building projects but also further afield. Outside the Crimea, major projects have included the Ukraina Palace in Kiev, the Olympic Sports Palace, Mir Hotel, Olympic Village, Tretyakov Gallery and several "cottages" in Moscow region, the Russian Federation Consulate in Kishinyov, Moldavia, the NATO HQ in Brussels, Belgium, etc. The sanatorium complex at Foros was clad with a lot of Inkerman limestone.

Today the quarry company working Inkerman limestone is a modern, highly mechanised mining concern. Production equipment includes a range of extraction machines (models SM-89A, KM-3A, KM-3M) and specialised machines for the processing of large blocks. The quarry face is worked by creating a series of low level benches - several benches can be worked at the same time. A stonecutting machine, moving on guide rails, makes transverse cuts into the bench with vertical blades spaced according to the desired width of the block. Using horizontal cutting blades the bench is then cut at the desired height. The final operation is then carried out with vertical blades to make a back cut separating a block from the rock mass. Blocks are transported from the quarry face to a holding area. They are held here for 10 days in spring or summer, and 22 days in autumn or winter.

During this holding period natural moisture exudes from the rock. The strength of the limestone is increased, its average density is reduced, its thermal and sound insulation properties are improved and it becomes cheaper to transport. Blocks (whose moisture content must not exceed 7%) are despatched to the consumer by road or rail transport. If requested by the client, the blocks can be pre-machined in a number of ways.

Inkerstrom Ltd has a stone processing factory on the outskirts of Moscow, where tiles and special building / restoration pieces are made.

Natural stone is becoming increasingly popular in the Ukraine, Russia and central Europe today as discerning members of the general public associate the qualities of prestige, long life, strength and beauty with this ancient building and decorative material. Currently there is a trend towards more complex architectural compositions. Our company is well aware of this trend and we therefore employ a number of highly qualified masons and sculpturers who can undertake any kind of project in stone.

White limestone from Inkerstrom Ltd. today adorns not only towns in the Ukraine and Russia, but also the Canadian city of Toronto. And we are thinking about deliveries to Portugal and Italy - sea transport makes this a real economic possibility.

Moscow is now regaining its ancient description as a "white stone" city. The churches of old Russia, adorned with carved limestone features, are rightly considered pearls of world architecture. It is difficult to overestimate the importance of our heritage, and Inkerstrom Ltd is actively involved in restoration work at several churches and temples in Moscow region.

Finally we would like to say that our company is well aware of the stresses placed on buildings clad with natural stone in an urban environment. This can include the vibrations caused by passing traffic. The resistance of natural stone to the effects of temperature variations and the polluted atmosphere found in many modern towns and cities depends to a great extent on the protection methods employed. Inkerstrom Ltd works with leading scientists and industrial chemists in developing effective solutions to prolong the life of Inkerman stone in different climatic zones.