The influence of industrial materials in sculpting of stone

In a reduced time space (taking into account stone has been worked in very different forms throughout history), the world of stone has gone through an unstoppable advance at all levels, including restoration, that has reverted to optimisation of production systems, both in the extraction of stone at the foot of the quarry as also in its later elaboration and/or restoration. This is due to the appearance and use of new products, materials and technologies that makes its manipulation more easy.

All these advances appear as a consequence of a series of needs in the industrial area, such as optimisation of material available and the time invested in the production of different products that exist in the market. The application of materials such as vidia, natural and artificial diamond, silicon carbide, etc. have made possible the working of stone materials such as granite, of great strength and resistance, and almost all kinds of limestone, impossible to work in traditional form. 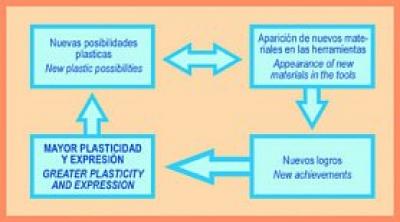 Different systems have been developed in the quarry, where studies have been done on aspects to take into account such as compactness of material, the direction of the vein, the position of the stratum, etc. In this way the extraction is optimised, choosing the most adequate system of cutting, thus reducing the loss of material to the minimum. All these advances have led to obtaining huge volumes of stone impossible to obtain a few years ago.

In the part that concerns us, we must say that the development in the industrial ambit of all that is related to stone, has also made possible decisive progress in the world of sculpture of stone.

The large number of advances achieved in the working of stone starting from the application of techniques and materials destined for industry, has placed in the hands of a sculptor a range of possibilities that did not exist till now. This fact has made possible the attainment of new visual and plastic resources in sculpture. Thus, the sculpture in stone is able to consider a new series of aesthetic questions.

The working of stone material with this "new technology" has generated a series of technical achievements not existing till now that have changed the conception of working with stone, making it possible to articulate presentation in accordance with the vital experiences of the artist.

This new aesthetic of stone has managed to be included in the tendencies in modern sculpture, eliminating in part, the position of certain artists as their work with this material is considered out of fashion. Evidently, the significance of these works executed in stone do not have the same meaning nor reason to be for those famous sculptures that were realised by artists such as Michael Angelo, for much time has gone since then and the arts in general, and especially sculpture, have evolved in big way. 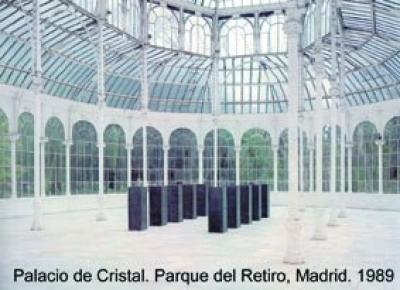 The arts have been transformed into a pure expression of the interior I, and the existential experiences of the artist in relation to the exterior world. Stone is a support where these experiences are spilled out in very different forms that go from working in stone with a high degree of technical perfection (not extent of meaning), to installations of the material in its purest form and without any type of transformation. In this aspect, stone is transformed into a vehicle that helps the artist to bring to light his experiences.

There are a large number of artists who work with stone, such as, for example, Anish Kapoor, Louise Bourgeois, Henry Moore, Richard Long, Joseph Beuys, Isamu Noguchi, Ulrich Ruckriem, etc. Each one of them works with stone in a different way. From creating illusion to the deceiving of the senses done by Anish Kapoor starting with simulation with different pigments; passing through the work with breakage as an example and representation of movement of the artist of Ruckriem; the intimate meaning and most profound desire in the works of Bourgeois; the design in sculpture and the work in public spaces reflection of the needs of the human being of Noguchi; the most traditional and organic form of Moore; to the meaning and mental process starting from installations of Beuys and Long.

All this accumulation of achievements is due to the application of techniques and materials originally dedicated to extraction and elaboration of stone in the industrial form. From the cutting disks for both hard and soft stones, drills for marble and granite, special grindstone, acids and special abrasives, chisels, pointers, vidia, passing on to machines such as radial, milling machines, drilling machines, sand blasters etc., the possibilities of working with stone have evolved spectacularly.

Thanks to the use of these machines and tools, the realisation of orifices and concavities using cutting disks and special drills and areas of minimum thickness that make possible a series of visual means and meaning that were difficult to achieve in previous ages, are now all possible. Due to the work with these machines and materials specially designed for working with abrasion, any percussion that may be produced in the working of stone is eliminated.

Neither should we forget that the methods of transformation and cutting of big blocks of stone can be used in an identical way if we speak of stone sculptures of big size, since many times the most effective way of working a stone of big dimensions is by cutting it with diamond wire.

Basically, the topic that concerns us revolves around the following scheme:

The new plastic possibilities of working with stone, are marked by the appearance of new constitutive materials of which form part tools, machines, products and specific work systems; but, if it had not been for these materials, the appearance of new expressive possibilities of the material would not have been produced in the way they have been demonstrated. On this point originates an arrow of double direction in which a relation of dependence is established between both terms and ideas.

The appearance of these new materials in the tools, machines, products and specific working systems for sculpture in stone, facilitates the obtaining of technical achievements impossible till now, which continue to show up in achievements , in which greater possibilities of sculpture exist, and of expression with the material, that at the same time continue to strengthen its expressive possibilities.

A circular scheme is established in which greater plasticity and expression is achieved with stone materials, it is a consequence and the same time a motor of sculpture in stone, thanks to appearance of new materials with which to work.

We have to say that, as we have been stating since the beginning of this article, the use of materials destined initially for the industrial world have managed to equip the sculptor in stone with technical resources, visual and tactile, that was unknown in previous ages. All this has managed to transform the denote vision of stone, transforming it in a perfect vehicle of the vital experiences of the artist in the modern world, marked by high technologies and computer processes.