A Giant Sofa Made of Belgian Granite

Even objects which are a functional requirement, can be designed in an attractive way. In the Saxon town of Schkeuditz, in Germany, a plain support for a slope has been built as a gigantic sofa made of granite, which invites one to sit down, linger and enjoy.

The main criteria was: not another wall! Perhaps it was the woeful experience of the East German citizens which helped that the suggestion of the landscape architect Dirk Seelemann from Markkleeberg was accepted. Admittedly, it would have been a very small wall compared to the notorious disgraceful Wall, but even that would have been too much for the square, which, anyway, is not exactly surrounded by magnificent buildings. Therefore, Seelemann suggestion was not to design the market square in Schkeuditz, close to Leipzig, in concrete but in natural stone, and that too as an oversize sofa, made of Belgian Pierre Bleu limestone. With the help of Sigrun Langner, for him it was important to create a generally accepted alternative with a great event character. 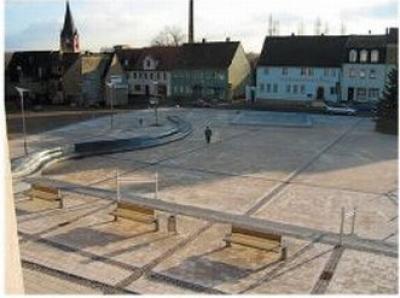 The conditions were as follows: the square can be separated into an eastern part, which mainly corresponds to the prior terrain level, and a western part, which cuts into the existing terrain and is supported by stairs at its northern side. The biggest difference between the levels of the two parts of the square is in the northern part, getting smaller southwards in the direction to the street. In order to support these level differences, the above mentioned stone sofa was suggested by Seelemann and the responsible politicians as well as the citizens quickly took to it.

This object covers the difference in height in the form of a snake. It follows the natural level of the terrain and becomes lower southwards. The object can be used as a multi-purpose “seat” and is an invitation to many new discoveries thanks to the sculptural treatment of the surface. The integrated fountains are a chief attraction, which will be especially enjoyed by the children. Two water courses will run permanently and two can be started by a non-contact sensor.

The giant sofa is supplemented by a stone “table”, an elevated platform as a further central element of the new design of the square. The table as well as the sofa consists of Belgian “Petit Granit”. Its lower edge is illuminated, thus giving the impression of a “floating top”. The surface of the platform is horizontal and a contrast to the slope of the square surface. That means, the platform can easily be stepped upon on its northern side, whereas the southern edge invites one to sit down as it is becomes higher in this direction. Having a surface of 100 square metres, the table can be used as a stage for town festivals or markets. 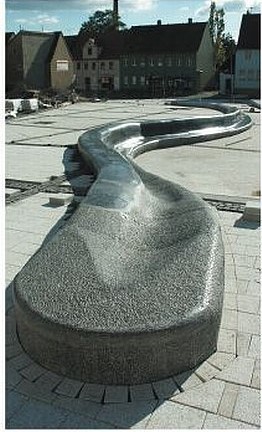 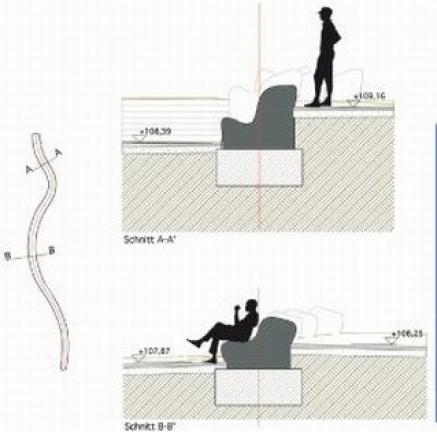 Data of this sofa is record-breaking: it has been made up of 32 individual elements, each weighing between 4.5 and 5.2 tons. Each element was cut with a contour rope saw from one block. The surface treatment of the elements ranges from sparrow-pecked to bush hammered, finely bush hammered and ground to polished, carried out by the Schultheis Stein AG in Goennern (Hesse, Germany). They were also responsible for the correct implementation of the water courses. After the elements had been set up on site, only the transitions between the individual elements had to be slightly corrected. The German Dembler company, having their headquarters in Bochum and a subsidiary in Markranstaedt-Priesteblich in the district of Leipzig, was responsible for the set up and the entire reconstruction of the market square. As a gardening and landscaping company, they have been concentrating for quite a long time on solutions with natural stone, and they have already received some awards for special innovations.

We have to wait and see whether the natural stone sofa will also receive an award or will be included in the Guinness Book of Records. We also have to wait for a few months before we can say anything definite about the degree of acceptance. Both objects cannot be used and the water courses cannot be brought into operation until then.