Extracting Stone in the cold

In most parts of the world, stone extraction is usually done in countries with moderate climates, or, where the weather can become hot, extremely hot in the summer. The word “quarry”, for most in the stone industry, is thus synonymous with heat and dust and sweat, with problems of dehydration for the worker, lack of water, etc. But, on this planet earth, stone is also extracted in extreme temperatures, the word extreme signifying not very heat but very cold. What is it like to work in the quarries in temperatures that are well below 0º C, going down to -20º C in some cases? That, after all, is the reality for those quarrying stone in countries like Finland, Norway or Russia during the long and harsh winter there. 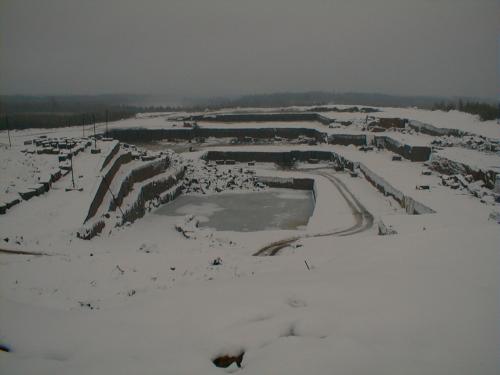 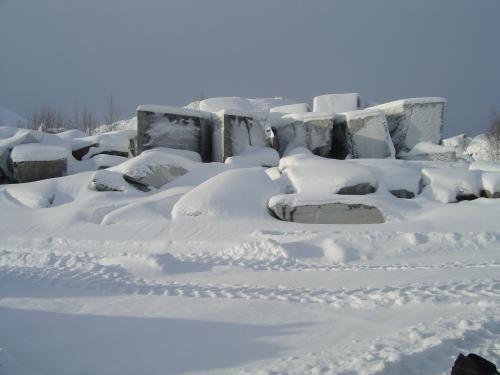 When your correspondent, used to living in Sunny Spain, first posed this question to the Technical Director of the Finnish company Palin Granit, Mr Erkka Lehto, he was surprised to hear the problem in extreme cold was not the people, but the machines. This, as he learned, was not some macho Scandinavian boasting, but actually a reply given in all seriousness. At low temperatures (and low is not less than 20ºC, as someone in Minas Gerais or Tamil Nadu would automatically assume, but -20ºC!), the metal becomes fragile when temperatures reach -21ºC. It then becomes difficult to get the machines started. Now if the morning temperature is only-18º C, (a pleasant day, thank you very much), the engines of the machines in the quarries can be started and so there is no problem if later during the day it drops to -21ºC.

At low temperatures, special types of oils which do not solidify, are needed for the engines. The hydraulic oils must also be heated because the hoses are very long and the jackhammers cannot get energy and lubrication if it is too cold

The floors in the quarries are also very slippery in low temperatures, so the shoes of the workers have spikes. Obviously special clothes with thick isolation are worn, especially when temperatures are less than -5ºC and windy. 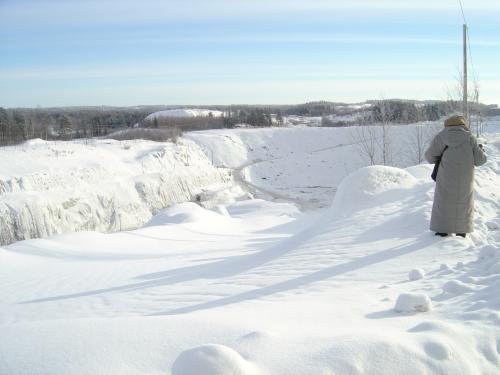 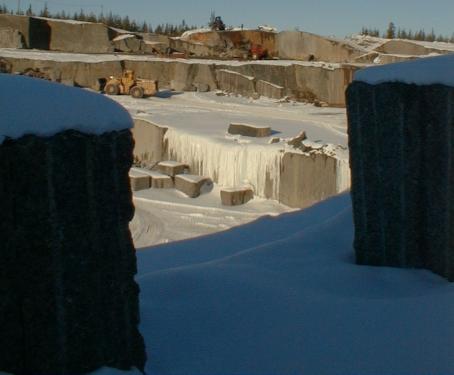 The light in the quarries must also be at all angles so there are no shadows which can lead to worker accidents. The wheel loaders and dump trucks too, have special chains on the wheels. (Would you like to go out and have a look? NO!)

Sometimes water flows into the quarry and then freezes and thus 2 to 3 metres of ice is formed. Extraction in this lower part of the quarry is not done until the weather becomes warmer. This problem is actually quite frequent. Surely there must be some temperature below which even the “superhuman” Finns in the quarry must conclude, today it is too cold to work in the quarries, let everyone go back home. Well, that temperature limit happens to be -25ºC, as Mr Palin had to reluctantly confess.(If only quarrying could be done until it became -30ºC, he seemed to be thinking, one got that impression). During the last several years, however, there has not been a single man day lost because of extreme cold, sometimes about 2 or 3 days are lost during the year. Way back in 1987 it happened to be an extremely cold winter and 16 man days were lost.

So what is the ideal temperature? -10ºC, it turns out. (Why are we not at the beach today, friend?) This is not considered cold. At 30ºC (obviously during the rare Finnish summer), now that is a problem, people become too exhausted, but that, thankfully(!) seldom happens.(Stop laughing, you guys from the Mediterranean area).

So, despite what would seem like inhuman temperatures for most of humanity, work in the stone quarries in Scandinavia steadily goes on almost throughout the year, and production of the different quarries remains stable. A hot coffee, please!