Exports & imports of marble and granite in Italy - 2011

In 2011 Italy exported over four million tons of marble, granite, travertine and other stones, including finished products and raw materials as well as chips and powders, thereby showing a decrease of 3.22% in terms of quantity, yet with an overall value of over 1.6 billion Euros there was an increase in overall value of 4.26%.

The figures are published by the Internazionale Marmi e Macchine Carrara, whose research office has processed the Istat statistics for 2011, comparing them with statistics from previous years and continuing its survey and assessment work that is well known to operators in the industry.

If we consider exports of the quality items with a higher average value alone, that is marble, granite and travertine, both as raw materials and finished products (table number 1), exports were of 3.051.955 tons, for an overall value of 1 billion and 587 million Euros, showing a 2.63% reduction in terms of quantity but a significant 4.32% increase in terms of value.

The reduction in quantity compared to 2010 affected all items except for granite finished products which showed a positive increase in exports of 0.7%, a modest but significant increase, while another item that showed an increase was raw slate, yet with modest quantities.

The reduction in demand from some North African countries had a decisive effect on Italian exports. Such countries included in particular Libya, Tunisia and Egypt which were affected by the Arab Spring while exports to Algeria and Morocco increased both in terms of quantity and value, accounting for 53% of stone exports to the entire area (66% in terms of value alone).

Germany continues to be the leading market in terms of quantity which recorded imports of approximately 247,000 tons for a value of 164 million in 2011 (+0.23% in quantity and +1.2% in value), including 108 million for finished granite products and a high average unit value of high quality materials (662 Euros per ton).

The USA, on the other hand, is the country that imports above all quality finished products and is the leading country in terms of value. Italian exports to the US in 2011 amounted to 164, 000 tons for a value of over 223 million Euros and, above all, showed a growth trend (+1.75 in volume and +2.6 in value) for all items considered except granite finished products which decreased, albeit in decimal fractions.

Saudi Arabia deserves a special note since, thanks also to the increase in the price of oil, it imported 161,893 tons (+28.9%) of Italian marble and granite corresponding to almost 70 million Euros (+41.45%), with a significant increase in the average unit value in particular for marble, both as raw materials and finished products.

It clearly emerges that exports of marble blocks and slabs decreased only in the North African countries while in all the other geographical areas the positive trend continued both in terms of quantity and value. In the light of this we should mention that exports of raw marble to the EU countries were very positive (even though value and quantity were limited) with an 11.6% increase in quantity (39,000 tons) and a 20.6% increase in value, reaching approximately 22 million Euros.

In 2011 Italian imports decreased for all items taken into consideration except for granite finished products (table 2). This is due to the substantial stagnation of orders which advised our companies not to make purchases if not strictly necessary. 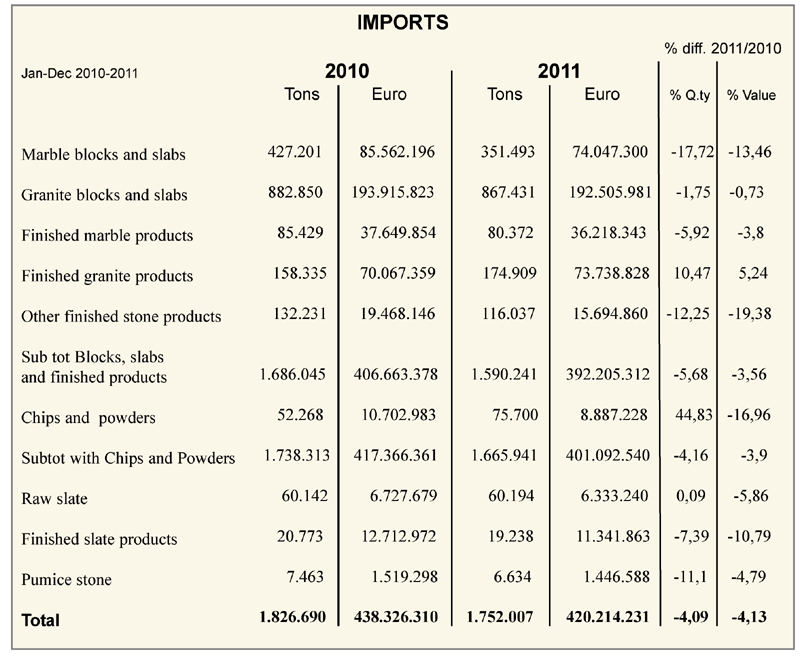 Imports from India are becoming increasingly important: in 2011 these amounted to 298,758 tons for a value of approximately 76,200,000 and make India Italy’s leading supplier (with a slight reduction in quantity of 2.4% a slight increase in value of 1%), accounting for 19% of all Italian imports in the industry and 33% if we consider granite finished products alone.