Exports and imports of natural stone in Brazil in 2021

The Brazilian exports of ornamental rocks enjoyed an exceptional performance in 2021. The exports turnover reached a record level of US$ 1.34 billion surpassing the historical record figure of US$ 1.30 billion way back in 2013. Compared to the year 2020 the increase in turnover was of 35.5% in amount and 11.4% in physical volume exported with a total of 2.4 million tons exported to 124 countries in all the continents. The reality of 2020 with lockdowns due to the pandemic explains to a great extent the impressive comparative increase in exports.  More significant, the average price of the export products was US$ 556.5 per ton with an increase of 21.6% with respect to 2020. 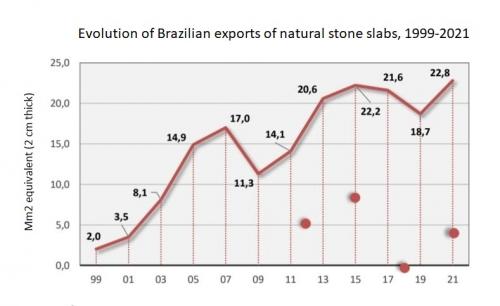 Processed stone accounted for 80.5% of the sales and 58.7% of the physical volume of exports, corresponding to US$ 1.1 billion and 1.4 million tons. The main products exported were slabs and cut to size in granite, solid quartz, marble, steatite and slate, apart from blocks of diverse range of granites and quartzite. It is estimated that Brazil has commercialised 22.8 million sqm in 2 cm equivalent in the international markets. 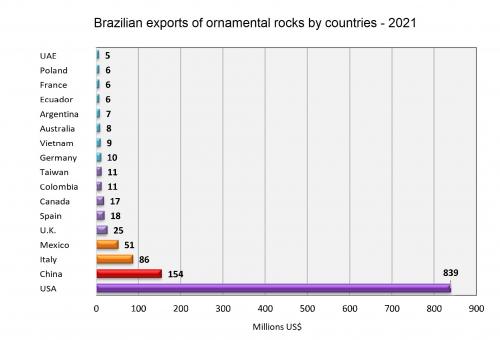 The five main destination countries of exports were USA, China, Italy, México and United Kingdom accounting for a total of 86.3% of all exports. The US, by itself, accounted for 62.7% of exports. The products exported to USA, mostly slabs, went at an average price of US$ 840 per ton, while China, mostly importer of blocks, accounted for US$ 220 per ton.

The Brazilian imports of ornamental rocks added to only US$ 26.6 million, about 55000 tons. The average price was US$ 484/ton and the main products were were slabs and blocks of marble, travertine, and limestone, including serpentine.

The new reality is Brazil has now become self sufficient with respect to practically any kind of stone.