The Egyptian Pyramids - The greatest project ever in stone

No matter how much one has heard, read, or seen in an infinite number of movies and documentaries the Pyramids of Egypt, nothing is comparable to the sensation of finding oneself in front of what is, without any doubt, the greatest architectural project in the history of Humanity. These impressive mountains of stone surrounded by a mystery even today, in the much waited twenty first century, have not been deciphered completely, they make us feel small and insignificant. But let us not forget, as the Egyptian tourist guides continuously point out, though the pyramids make the person feel small, they were built by people. The Egyptians get irritated by the insistence of some who think these constructions have a supernatural origin.

Metaphysical considerations apart, the fact is that increasingly more details are being discovered about the construction of the Pyramids. Even though in many cases we are moving in the terrain of theories, we can still explain how the famous pyramids of Cheops, Khafre and Menkewre, located in Gizeh, very close to Cairo, were built. Forget about what one has seen in the movies, since it has nothing to do with reality. To begin with, there were no slaves in the time of the Pharaohs, so that, once our schemes are broken, we should begin from zero.

For the ancient Egyptians, the real life began after death. This belief is the reason why 4600 years after their construction, they and the funerary monuments still remain and in considerably good state while, curiously, not a single house or palace remains, since for these constructions they did not use lasting materials such as natural stone. What was important was what came after life, that is why there was no special interest in perpetuating earthly goods. Egypt had a large variety of stone materials. All though the length of the Nile there were about 40 types of stones catalogued and used for artistic and architectural ends. Before constructing the pyramids, the pharoes were buried in mastabas, funerary monuments of only one floor. 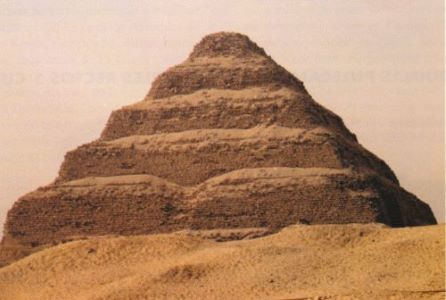 The first pyramid built was the graded one of Zoser, which exists even today, in Sakkarah, the necropolis of Menphis. Built in the year 2650 BC by the architect Imhotep, initially it was supposed to be a mastaba but later floors were added until they reached six. It is the oldest monumental work in stone known to man that exists. Its exterior walls, of white limestone, measures 545 metres from North to South and 227 metres from East to West. The wall has 14 doors, 13 of them false. Its height is 66 metres. In its interior, lies the sepulchral chamber of the Pharaoh Sneferu with cladding of pink granite and sealed with a block of stone of three tons weight.

Also in Sakkarah one can find the "false pyramid" or a curved pyramid. This pyramid was built for the Pharaoh Sneferu, father of Cheops, though he never occupied it. Its sides are straight, not graded, except for a change of angle in the centre of each of them. As a result, it has an irregular ending. The architects reduced the angle of inclination halfway up in the wall for fear that the construction was unstable. This forced the construction of another eternal house for Sneferu, the only Pharaoh with two pyramids. 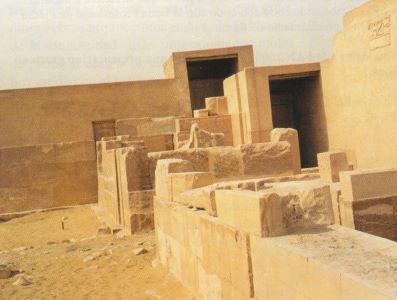 EXTRACTION AND ELABORATION OF THE STONES

There are various theories which explain how the blocks of stones were extracted and cut. The methods were distinct depending on the hardness of the stones. The ancient Egyptians classified the stones according to the appearance, strength and location. They differentiated between limestone, sandstone, alabaster and granite, but basalt and other stones were grouped under the same terms.

The limestone rocky masses were located in scaled horizontal layers. The ancient Egyptians exploited only the layers of high quality. They extracted the materials selectively choosing the ones most resistant to the weather; for this they had to use several times wells and galleries. They only worked in the open sky in those places where the layer of stone to be exploited was too high or was directly below the covered rock.

Both in the case of the limestone as well as sandstone, first the blocks were cut from the square or rectangular base according to the use it was going to be put to. The exploitation of the quarries was done advancing from above to below, cutting the blocks by means of making fissures and separating them from the base. Wooden hammers and metal tools were used, in the beginning copper, and later, bronze. In a later period ( 10TH to 8TH century A. C.), metal chisels and wedges were used. One can find prints of the use of these utensils on the walls of the quarries: in the oldest ones one can see small marks, and in those exploited in later times, these reached up to 50 cm length and are extraordinarily parallel, which makes one think of the use of large metal chisels. But the pyramids of Gizeh were built almost two thousand years before, so that the method of extraction was not so "sophisticated”.

It seems the theory considered valid till recently that the dismounting of the blocks was done by means of the use of wedges which, on becoming wet, would expand and separate the blocks, is not certain for none of the different types of stones. The procedure consisted of inserting chisels which later would stick to the wedges to increase the pressure and thus separate the blocks. In the case of granite, to find the best pieces it was necessary to go much deeper. There is a theory which sustains that a method used to arrive at the lowest layers was to make a huge fire over the rocky mass. With the heat the granite would break easily. The fire would extinguish when it reached a layer where the material was of the best quality.

For the elaboration of hard stones, basically granite, tools of dolerite were basically used, a stone of strong resistance to blows. The hardness of the stone impeded the use of metal chisels. The procedure was the following: the adequate block was selected and the upper pieces were slowly removed by means of blows with dolerite stones until the desired form was achieved. Afterwards, to remodel the surface and engrave inscriptions, metal chisels were used. The polish was done with powdered quartz mixed with sharpened stone.

The ancient Egyptian quarries could be considered a kind of workshop of sculpture, since in them worked, apart from labourers, quarry masters, sculptors and chroniclers. The pieces were practically terminated in the quarry itself, from where they were brought out with the inscriptions completed. The transport of these Pharaonic works was done by means of ramps formed of pieces of stone covered with a layer of sand and mud from the Nile. The pieces were mounted over wooden sledges that were pushed by bullocks or by men, as can be found in some papyrus and reliefs..

CONSTRUCTION OF THE PYRAMID OF GIZEH

The pyramids of Gizeh were built during the period of the Ancient Empire, by the Pharaoh of the fourth dynasty (2613 to 2498 BC). The motive for using the triangular form in these constructions is not known, though it could be a way of reproducing the form of mountains where, for the ancient Egyptians, the Gods lived, or they could also be understood as staircases by which the spirit of the Pharaoh would reach the skies.

They are located in a rocky area, above the quarry itself from which the blocks of limestone of lower quality were extracted, used for the nucleus of the pyramids. The cladding of white limestone proceeds from the quarries of Tura; passing through the Nile towards the south, and the granite used in the construction of the corridors and the funerary chambers came from Assuan, 800 kilometres away. The pyramids are located on the west bank of Nile river and were connected to the river by means of elevated roads of stone, built to facilitate the transport of the stones which came from the quarries.

It has been calculated that with the blocks used for the construction of the three pyramids of Gizeh one could make a wall of 3 metres height of 30 cm thickness going all around France. In the biggest of them all, the Great Pyramid of Cheops, 2,300,000 blocks of limestone were used, with weight of each block weighing between 2 to 15 tons. It has a width of 230 metres in each one of the four sides and a height of 146 metres. The pyramids of Khafre, son of Cheops, is slightly smaller : 215 metres wide and 143 metres high, and that of Menkevre, grandson of Cheops, is the smallest:103 metres wide and 66 metres high. 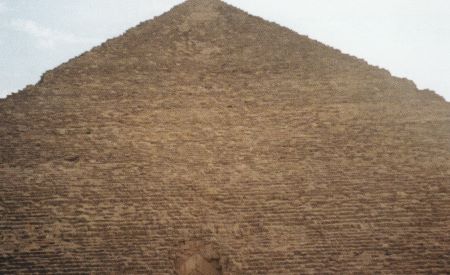 The pyramid of Cheops is the biggest monument of stone ever built. Within the pyramid there would be room for, for example, five cathedrals put together : that of Florence, of Milan, of Saint Peter in Rome, and the two in London, that of Saint Paul and Westminster. Probably, before constructing the pyramids tests on scale were done, since scale drawings have been found. The first phase of the work consisted in making the terrain even. Something that is very striking is the geometric precision that permitted the perfect alienation of blocks ( something that did not occur in the pyramid of Sneferu, as we have seen). Each side measures 230 metres and is oriented perfectly towards the four cardinal points. 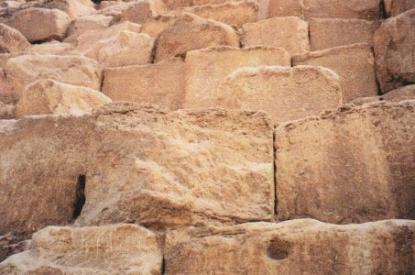 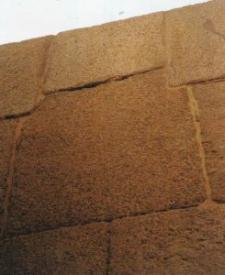 It is believed that for constructing the pyramid of Cheops 20 years were needed for preparing the blocks and 10 years for their installation. Work was done only when the Nile rose, when it was not possible to work in the fields. There are different theories about who and in how much time the pyramids were built. According to the historian Herodotus ( who visited Egypt in the century 5 AC), in the construction of the Great Pyramid about 100,000 people worked in sessions of 3 months a year, but the most recent theories sustain there were 4000 people.

The blocks of the pyramids fit into each other with great precision. This makes one think that the polishing of the blocks was done after the installation. The quarries wee close to the river, therefore, the transport of blocks was done in rafts on the Nile. The transport to the pyramid was then done by means of an elevated path made of stone, a path that was later used in the funerary processions.

The line of blocks were placed seemingly from inside to outside. To raise the blocks, probably a system of ramps was used and the stones were hauled over them by mans of skates. It is also possible that scaffolding was used for installation of the limestone. Of this cladding the only remains can be found in the upper part of the pyramid of Khafre. It is believed that the polishing of the cladding was done from the top to the base. What is certain is that in the constructions of these pyramids metal tools were not used, nor motors or wheels.

Almost 5000 years later, the funerary complex of Gizeh, with the enigmatic Sphinx constructed on a mountain of limestone of 5 x 4 metres presiding ( what is supposed to represent the Pharaoh Khafre, though this is only a theory), continues to be witness to all the history of Humanity. Increasingly the following assertion sounds more real " Man fears time, but time fears the pyramids."