The Dolomites of Marmara Island, Turkey 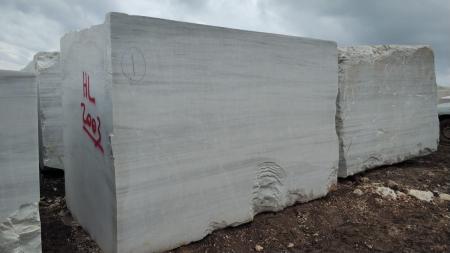 The limestones of Marmara Island in Turkey have been known since ancient times and have been widely used in architecture through the centuries. Three great civilizations, the Roman, Byzantine and Ottoman, all extensively used the marble from Marmara for all kinds of works- palaces, churches, mosques, statues, etc. The temple of Artemis in Ephesus was made of marble from Marmara. It has also been used in the Vatican. There is, in other words, a 2000 year history behind the stones of the island.

A renaissance is now taking place in the stone industry on the island with new quarries opening up in recent years due to their strong demand in many countries. This article highlights the famous marble.

Marmara island is the largest of all in the Sea of Marmara, about 150 km from Istanbul and can be reached by ship. It is 35 km from Erdek, in the mainland).

There are two areas of extraction on the island, Saraylar village and Badalon. Saraylar  has been famous for marble extraction from times immemorial and any visitor to the place is soon reminded of its heritage in marble. It is known for white marble with grey strips. The names given are Marmara White, also Panda and Equator. For the dolomites of the Badalon area the name most well known is Pristine White. 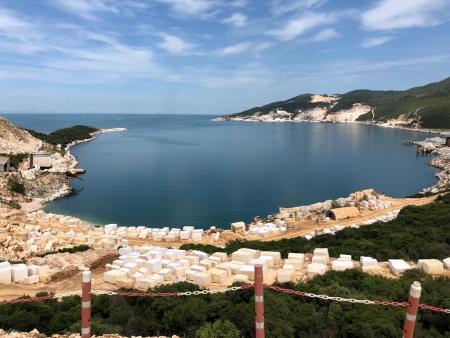 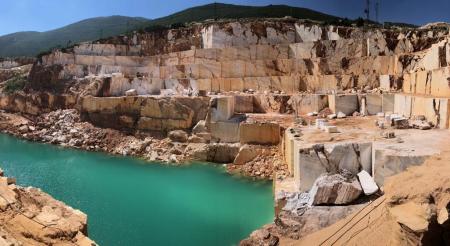 The production of the quarries is currently relatively small when compared to other marble quarries, though with modern mining techniques quarrying is nowadays becoming more efficient .

The new quarries, which are of Dolomite, are now opening on the other side of the island. They are just 10 km away from the historical quarries. These new quarries are not as efficient as those of Marmara White quarries. Around 6 to 7 new quarries have opened during the last three years and more could open in the future. The quarries of dolomite are usually small or  medium sized, which means the average annual production  is in the range of 5000 to 15000 cubic metres per quarry as of 2019. Some quarries are located just next to the sea and seawater often needs to be extracted.

The Dolomite is soft stone and aesthetically is of pure white colour. The non- crystalline structure means it has a soft and milky background. Because of the soft tone the base colour remains uniform, a reason for its popularity among architects. Other white marbles can have 'florescent light reflections' which is not the case here. When the interior designers want a soft tone aesthetic they have limited options. Additionally, because they are compact materials, the Marmara Dolomites have less absorption

Sometimes the material has yellowish or reddish impurities, and sometimes there are light grey lines. The generic name could be Marmara Dolomites, though different companies often tend to give different names.

The best quality stones are comparable to the Carrara marbles and to Volakas and even professionals find it difficult to identify the different origins.

A small number of factories are located on the Marmara side of the island but these units do not process the Dolomites. It is the factories in Anatolia that process these blocks, but there are not that many companies working with the Marmara Dolomites, less than ten of them.

Getting big size blocks (2.7m x 1.6m) is extremely difficult and, perhaps,account for no more than 5% of the material.

The Marmara Dolomites are mostly commercialised in the polished finish. The Marmara Marbles give a very high polish, in excess of 100 but the Dolomites do not give a high polish, less than 85.It is this aspect that makes them popular in the West. Because of the softness there is no need to hone the stones .

The main application is in decoration. In Turkey a big application is in mosaics.. Another unconventional application is the use of fine dolomite in the detergent industry. The Turks consider it to be a natural hygienic surface material and a popular use is as surfaces in food preparation. 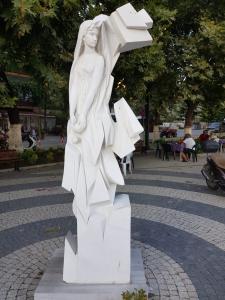 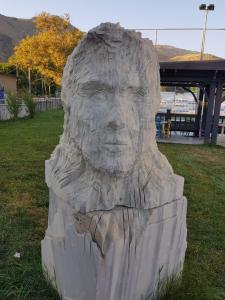 The biggest buyer is China. In fact, many block purchasing companies from China actually have their staff living on the island on a permanent basis on a rotation basis. The Chinese seem to buy all the premium quality blocks( premium here being considered as premium size along with criteria of selection). The greyish blocks are used by Chinese companies in cut to size. Italy is also an important buyer and their buyers seem to be willing to pay the highest price for the premium blocks. In recent years buyers from India have also become significant clients and they usually take blocks with yellow and reddish veins apart from white and grey.

The United States is the biggest market for tiles and cut to size. Premium quality tiles of 1 to 1.2 cm thickness can command prices in the range of US$ 130 to 150 per sqm at ex-factory prices. Moreover, prices seem to be going up in a big way, year after year, as a result of the strong demand. In other words, while the natural stone industry in general is not currently passing through its best moments, there are several exception, and the stones from the Marmara Island, especially the Dolomites, is one of them.

Acknowlegements- Our thanks to Mr Ali Sayacki and Mr Tuncay Ozay for the information and photos provided for this article.