The granite water memorial to Diana, Princess of Wales, which was unveiled in London in July 2004, was produced using ground-breaking 3D technology and production techniques previously available only to the automotive industry. This technology means that for the first time, the architectural world can now create mass-produced stonework quickly, and in any combination of complex shapes and textures. 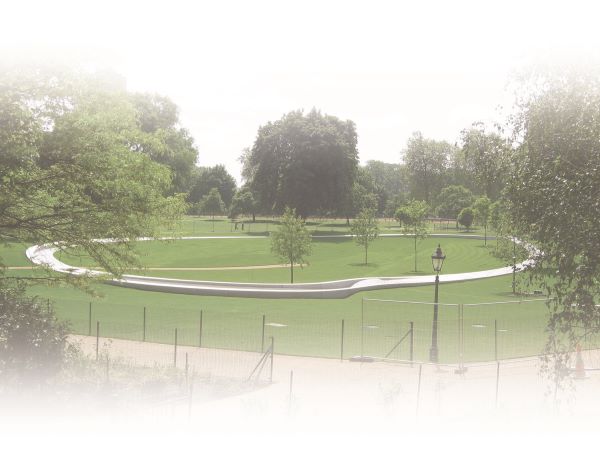 In only 32 weeks, 350 tonnes of British silver-grey De Lank granite were transformed into 549 unique pieces of stone to create a 3m- to 8m-wide elliptical watercourse with a circumference of 210m. The design's complex surface details, which mimic the intricate patterns of natural forms such as ripples of sand on a beach, could have been hand-carved. But traditional methods would not have enabled the project to be completed in time and within budget. It has been estimated that 360 full-time stonemasons would have been required throughout the seven month manufacturing period if the memorial had been worked by traditional methods. The impact on the £3.6m budget was not worth calculating!

The design for the memorial was created by Gustafson Porter, an international landscape architectural practice based in London. It began with a freehand drawing of the shape of the memorial and a description of the complex textures, patterns and water features on its surface that would make the water tumble, cascade, curl and bubble as it ran its course. 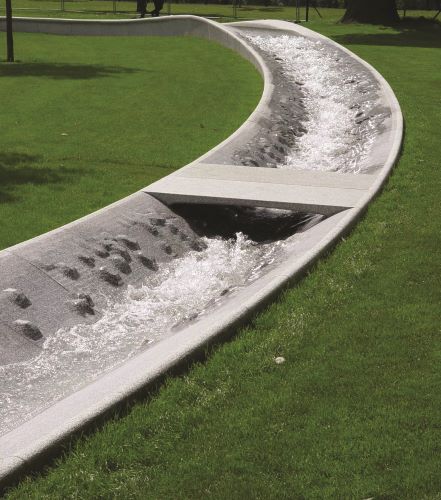 Initially a clay model was developed and, from this, a rubber mould was made and a cast produced. This cast was then digitally scanned by the Ford Motor Company to create a 3D scan file. The Ford scan file allowed the design team to create sections through the memorial's granite ring and surrounding land to develop the design of the features in more detail. This was the first time this software had been used for architectural purposes. It had to be adapted from its usual automotive industry applications.

Surface Development and Engineering, a British firm specialising in high quality computer generated surface models, were able to develop the design into the final smooth 3D model. They used their computers to model the full shape of the memorial, creating a seamless electronic file detailing the exact shape and location of each of its 500+ stones. This 3D virtual model became known as the jelly mould. It incorporated the detailed design cues and all the engineering and technical restraints involved, and it was divided into individual stone blocks for the stonecutters. 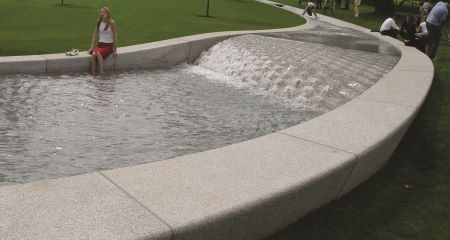 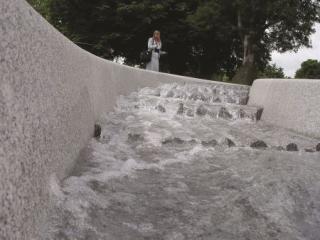 While the shape of the memorial had been translated into software, there still remained the difficulties of creating the many complicated textures and patterns on the stone. This part of the procedure was solved by a company specialising in textured surfaces, Texxus. This firm had recently solved the problem of digitally creating all types of texture patterns, visualising them as 3D objects and reproducing them in the real world. They were employed to computer model 230 m2 of unique surface patterns and merge their software with the jelly mould software.

The outcome of this groundbreaking technical effort was a set of complex computer files that described, witih engineering accuracy, the precise shape and surface texture of each piece of stone in the memorial.

Meanwhile, the stonemasons, S. McConnells of Kilkeel in Northern Ireland, needed all their machines to be able to understand this advanced software. From previous high-profile projects McConnells had already proved that their advanced machinery was capable of scanning shapes from real models and producing identical pieces of stone. Now they had to produce stone to match a shape on a computer file.

Their existing Omag CNC miller-router was reprogrammed but when the first designs arrived and the first piece of granite was put on, the £100 tool was worn out after cutting a 100m x 100m section. 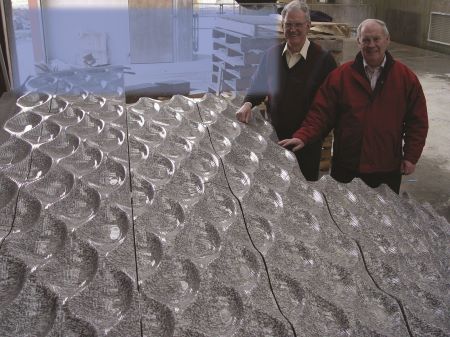 It was apparent that the Omag alone, even with longer lasting tooling, would not be able to complete the project in the timescale. The solution reached was to change some of the designs so that they could be carried out on saws. McConnells bought two Terzago saws (a Plana and a Forma) and another company, Vero, developed the software to enable the saws to perform like routers so they could produce the shapes necessary.

In just two weeks new tools had been produced for the Omag and the Terzago saws. The first saw was installed by the end of June and the second during July, both using the new software that could turn the Texxus designs into reality in stone.

By the end of August last year, McConnells went on to production shifts. The three machines worked a minimum of 100 hours a week and manpower had to be available in the yard 21 hours a day. Two extra CNC machine operators were employed.

Despite the tight deadline, computer files from the designers did not always arrive on time. "But the date never moved for us," says Glyn Lucas who was in charge of the workshop producing the stone for the memorial at McConnells. "The expectation was that we would meet the deadline whenever they gave us the drawings."

On one occasion when drawings were late it was suggested to the stonemasons that they order oversize stone in order to have the blocks ready when the designs came in, but some of the stone were already taking several days on the machines. "An extra 20mm on the block could be hours extra on the machine. When you multiply that by the number of square metres we had to work...". He concludes with a shrug.

"The final date I gave them was 15 December. I told them if we didn't have all the designs by that date we could not produce the stone by the deadline. The final files arrived in January and we started working almost around the clock. We finished on time".

The only part of the process carried out by hand held pneumatic tools (rather than by computer-controlled machines) was a dolly punch finish. This was added to the kerbs at the edge of the watercourse to aid slip resistence. The water in the memorial is only up to 200mm deep but the public are allowed to paddle in it.

McConnells say they have made no profit from the project because they had to buy two new machines and adapt them to perform as routers. The software alone cost £40,000. But the legacy of the project is a unique capability among stonemasons because they, in partnership with Texxus, can now offer the most sophisticated level of stoneworking to any architect.