The Spaniards who reached the New World around end of the XV century or towards the beginning of the XVI century, guided by Christopher Columbus, used for the buildings of their new settlements and the main social buildings, a limestone denominated Coral Stone, which, even today, can be found in abundance in the Dominican Republic and Colombia.

This stone was formed in the riverbeds in the period Pleistocene, starting from the fossils, corals and other marine animals, thus the majority of the coral limestone has originated in the reefs.

In the coastal area of south of the Dominican Republic is where this stone is found the most, though there are also important deposits in the northern part, as also in the province of Samaná, Gaspar Hernández, and Cordillera Septentrional. There are currently six quarries being exploited and there around 10 companies which work with stone in the Dominican Republic.

The Coral Stone comes in several colours, each of them with different densities and strength. The pink colour shade is due to the iron oxide with which it is mixed, the yellow are dense and highly resistant. The black tone, on the other hand, tends to be not very strong and is used above all in the cladding of pathways and gardens.

The Coral stone is present in the market in three varieties in function of its density: porous, semi-porous and compact. The porous version is the most used. The stone allows for several types of finishes- rustic, honed, aged, and split, among others. The most common ones are brushed and honed.

There is such a wide range of use and finishes that the Coral Stone is an element where a simple detail leaves its impact in a construction with a tone of seriousness and nobility maintaining a natural look. There is a type of Coral Stone for each occasion, according to its use and the appearance one wants. If one is looking for a uniform tone for architecture work, precision in the details and a natural appearance, and one does not want that the Carolina has an aged look, that it always shows a natural colour, then the most adequate is Classic Coral, which is dense. When it is a question of a facade in which one looks for an aged appearance with holes and the aging that reminds us of our history and the first buildings in the New World, then the best option is the Colonial Coral. For those unique designs in which the architects and designers do not want a completely white tone and prefer a material with high resistance and shades with coral colour and golden pigments, then the one to use is Sunny Coral and Golden Coral. Finally, for use in interior floorings in residences where a honed finish or polish is applied, the ideal one is a Carolina which retains well the stucco, then one needs to use Palladium Coral.

Applications and advantages of Coral Stone

The main application of the Coral Stone are the architecture projects both in the public and private sector: claddings in buildings, squares, upper class houses, shopping centres and hotels, swimming pool and jacuzzi areas, gardens, walls, interiors of beach houses, bathrooms. It is also used in the elaboration of marks of doors and windows, columns, balustrade, swimming pool kerbs, and decorative elements in interiors.

The main advantage of the Coral Stone over other materials in the market is its thermal properties: there is no other material in the market capable of repealing heat more than Coral Stone, thus its extensive use in the swimming pool areas: under the burning sun one can walk comfortably barefoot over it without fear of it heating. Its use in flooring or wall cladding maintains the home fresh. 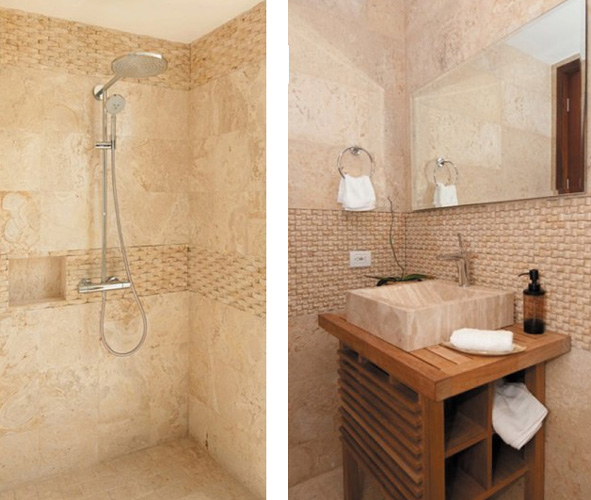 The beauty of its corals gives it the exquisite natural touch of good taste. Its colour is without any doubt a neutral element in decoration that goes with everything. Another advantage is its easy cleaning and maintenance when appropriately protected. It is a material that can be worked on and repaired to perfection, maintaining the beauty of the piece without alterations. In architecture works, the possibility of working the details maintaining a natural appearance without need for polishing is an advantage. In flooring, the anti-slipping properties makes the Coral Stone a perfect material for swimming pools.

A bit of history 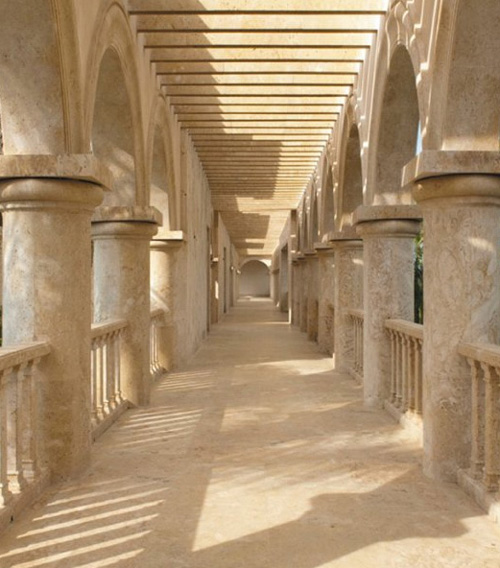 The main buildings in the colonial era in the Caribbean were built with Coral Stone. In the Dominican Republic one can highlight Alcázar Virreinal de Don Diego Colón, the Cathedral Primada de America and the ruins of the ancient Hospital of San Nicolas de Bari, in Santo Domingo. During several years the use of the Coral Stone in the Caribbean was limited exclusively to the elaboration of monuments. In Florida (USA), however, the Coral Stone has shown its biggest splendor with the building of huge mansions in Carol Gables, Coconut Grove and West Palm Beach, where its use has been as the main element in facade claddings, flooring and architectural works for an economically privileged class.

In the last ten years its use has increased in private residences and touristic areas. Some examples of these projects are the Commercial Centre Mary Park, the Hotel Ritz Carlton, both in Florida, Cap Cana, the Meliá and Barceló Hotels in Punta Cana. Nowadays the Coral Stone is valued as one of the more noble cladding materials, when a natural look is desired.

This article has been written with the collaboration of Teresa González Díez and of Christian Herrera of Marmotech, to who we are grateful for the information and photographs.