The Bindesplatz (Federation Square) in the old city of Bern, the capital of Switzerland, has been re-designed and re-landscaped in 2003-2004 at total cost of 8 million Swiss Francs (approx. 5’2 million Euro). The new design provides a most attractive appearance by three simple elements: stone, water and light.

The old part of Bern is regarded as one of the best kept medieval cities in Europe. Since 1983, as an ensemble, it is one of Unesco's cultural heritage objects. Founded in the 12th century on a hill site surrounded by the Aare river, the city developed for centuries in line with a an exceptionally coherent planning concept. The buildings, dating from a variety of periods, include 15th-century arcades and 16th-century fountains, most of them made and constructed of local Bernese sandstone, a rather soft natural stone of greyish/greenish colour. Most of Bern's old city was restored in the 18th century but it has retained its original character. 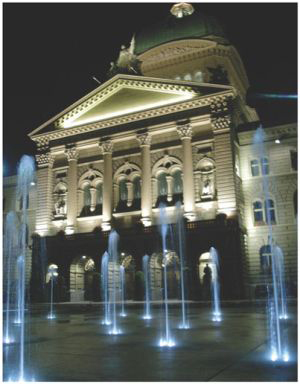 Federation Square, designed and constructed in the early 20th century, is old Bern's largest and and most important city square. To the South, it is bounded by the government and parliament buildings of the Swiss Confederation, to the East by the imposing headquarters of the Swiss National Bank and to the West by the headquarters of the Bernese Cantonal Bank. The North side of the square, finally, joins directly to two neighbouring city squares (Baerenplatz and Waisenhausplatz).

Since more than a century, Federal Square servers a venue for political rallies, concerts and - today - also for sports events. Additonally, it is where the Swiss government receives official state visitors. Twice a week it is also the show place of a most colourful city market for fruits, vegetables and flowers. In short: Federal Square is both a focus of Switzerland's sense of national identity and the pulsing heart of the country's capital city.

In the second half of the 20th century, the square lost its charm mainly through the ever growing motor traffic. During a longer period, it even simply served as a parking area... To end the unsatisfactory state as an "asphalt desert", a nation-wide competition among designers and landscape archtitects was started in the nineties of the 20th century. Out of more than 200 proposals, the competion was won by a team consisting of the designers Christian Stauffenegger and Ruedi Stutz (Office: Stauffenegger + Stutz, Basle/Switzerland) and the architect Stephan Mundwiler, Santa Monica, USA. After many year's of public debate and planning, their project was finally realized in 2003/2004.

As mentioned before, Federal Square is one of Switzerland's most symbolic locations. The precise form of the square's new architecture is intended to reflect this. The square contains a large 60 by 36 m rectangle of natural-stone paving, which is designed to parallel exactly the geometry of the parliament building. The paving of the square is intersected by a gently curved illuminated strip, which guides the walker's path from the neighbouring Baerenplatz square towards the Parliament building.

The square is paved with some 3600 pieces of large (100 x 60 x 6 cm) symmetrically-arranged natural-stone tiles, which provide a most decorative element. It was the architect's choice to use the characteristically veined Gneis stone from the Valser valley in the canton of The Grisons. This stone, with its grey-greenish colour that complements that of the surrounding sandstone buildings, helps to give the square its unique identity. The stone was quarried, cut to size and surfaced (simply sawn) by the stone producing company Truffer AG in the
Swiss mountain village called (www.truffer.ch); natural stone consultancy was provided by Dr. Peter Eckardt from Mineral Consult AG, Volketswil-Zurich (www.eckardt.ch). 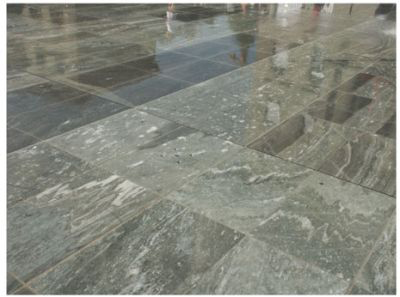 A unique fountain with 26 water jets gives a sense of three-dimensional space to the square. The 26 jets, which shoot water up to a height of
four metres, add to the atmosphere of the square, both at day and night. The water flows along channels cut into the surface of the square and into an underground tank, where it is cleaned and re-circulated. Each of the fountain jets can be controlled individually, which makes it possible to create a whole range of "dancing water" routines. Lamps set into the paved surface also make it possible to light up each jet of water.

The project to re-landscape the square was implemented in two main phases, which took just a year to complete.

- Archaeological soundings and excavations.
Main excavations and concreting work, plus installation of the pipework for the fountain.
- Replacement of existing electricity, water and gas mains.