At a time when the natural stone industry is facing unprecedented challenges, there is severe competition from new alternative materials, new competitors from other countries, the pandemic, economic turmoil in many markets, it comes as somewhat of a surprise that there is one country, a major player in the world of natural stone, that is showing turbocharged growth. New quarries, profitable growth in sales, especially exports, major investments by companies, a growing local ecosystem of suppliers of all kinds of inputs, upgrading of local skills, relatively young people running the companies, a generally optimistic outlook towards the industry's future in the country- all the parameters that define an industry with a promising future, are fulfilled in this case. That is what the situation of the Brazilian stone industry currently is during the middle of 2021- call it the Golden Age, and this definition does not look an exaggeration. 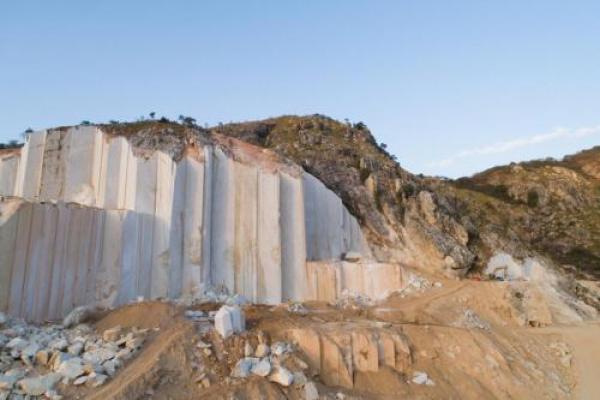 1.Over the last decades Brazil has not been growing economically in a consistent manner. In fact, after hosting the World Football Cup in 2014 and the Río Olympics in 2016,  it went through a severe economic slump and only recently it has been crawling out of the recession, until the pandemic struck hard, as it did everywhere.

2. During last few years, Brazil, usually known as being a mostly granite producer in the international markets, has emerged as a major player also in the world of marble. Not to speak of quartzite, usually termed commercially as granite, which has taken the world by storm.

3. The number of active quarries producing blocks currently in Brazil is estimated to be around 600 against an estimated 400 a decade ago. The figures, however, are an estimation only, it is hard to get exact figures, but they do reflect a growing industry.

5. There are now 2 local machinery manufacturers of multiwire machines and several other local manufacturers of different types of machinery. There are an estimated 350 to 400 multiwire machines installed in the country. The ancillery sector, however, is still by and large mostly import dependent, subject to the vagaries of changing import duties and a volatile exchange rate.

6. Just name the stone materials from Brazil that were most popular a decade ago-they were the yellows and greens located mostly in the state of Espirito Santo and Minas Gerais. During this decade it is the quartzites from Bahia, Goias, Para, Minas Gerais and Ceara,  the white marbles from Espirito Santo and Paraná for which Brazil is nowadays mostly known. 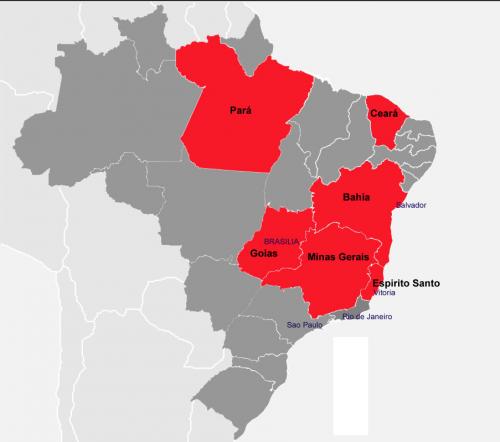 7. The average size of 'medium' to 'big' stone companies in Brazil seem to be bigger than just about any other country, except for, perhaps, China. While it is hard to make a reliable list of the 25 biggest stone companies in the world, one can be reasonably certain that if such a list were to be made, there would be at least 10 companies from Brazil in that list.

How and why has the Brazilian industry developed?

It is thus logical to ask the question- how and why has the Brazilian stone industry developed and grown so impressively in recent years, especially since the granite industry in other traditionally important processing countries seems stagnant ?

1. The most obvious explanation is the sheer variety and range of dazzling materials that are quarried from the vast geographical territory- and the fact that more and more new exotic and other aesthetically attractive materials continue to be mined all the time from its  vast geographical territory. Just over a decade ago Brazil was known mostly for its varieties of greens and yellows granites. Fashion being what it is, the market preference switched to lighter colours around a decade ago. Low and behold, quartzite quarries, located mostly in the north east of Brazil, suddenly came into the market, perfectly matching the new market preference of interior designers (especially in USA, the biggest market for Brazil, by far).

2. With the Brazilian economy in a state of almost permanent crisis, its currency, real, has been sliding against the US dollar over the years. Compared to a rate of 2 real per 1 US dollar in 2011, 3 real= 1 US dollar in 2017, it was around 5.8 real in April 2021. A weak currency creates all sorts of problems, especially for importers of all kind of goods, but for the exporters it is a great opportunity, it makes them overnight very competitive in international markets. This is exactly what has happened to the Brazilian exporters. While the companies selling in the local market suffered greatly due to the expected collapse of demand once the construction activity related to the megaevents of the Río Olympics and World Football Cup were over, the exports of Brazil shot up. With the demand for blocks from China for its own never ending construction boom also increasing, profitability for the quarrying and processing companies was assured.

Unlike in Europe or in India, in Brazil the industry structure started a concentration  process in the sense the companies which owned the factories also, by and large, controlled the quarries. Back or forward integration- call it what you will, took place.

3. As if the weakening currency was not enough to provide a competitive advantage, a steadily developing local ancillery industry ensured that many input costs were in the local currency, and not affected.

Upgrading of skills and greater sophistication

Some Brazilian companies have realized the importance of moving beyond the model of selling blocks and slabs/tiles and the need to upgrade and acquire new skills to deliver cut to size for projects. They have been investing not just in machinery but also in training professionals and organising courses and providing internships. They have also been bringing architects and interior designers to be part of their technical sales teams.

The increasing professionalism of the biggest BrazilIan stone companies over the last decade is perhaps the most understated phenomenon and less known to the rest of the world.

Big US importers have their own offices in Brazil due to the huge volume of business leading to close relationships between the Brazilian companies and the biggest US. Over time a relationship of trust has been built between the two.

While the success of the Brazilian industry over the last few years is undeniable, there are some obvious vulnerabilities and weaknesses.

1. The biggest weakness is the overdependence on the US market. While the US market is currently (April 2021) very strong and dynamic, and is expected to continue to be so in the short and medium term, selling there is still often a risky business. Payment guarantees are hard to get, though some Brazilian companies have cushioned their risk by opening their own offices and warehouses in USA. They also have, by now, a tremendous amount of knowledge of their customers and a pretty good awareness of trends. Still, overwhelming dependence on just one market is always a signficant risk in today's fast moving and volatile world. Anyone who has followed the US economy over decades knows the country goes through cycles of strong growth followed by a sudden downturn.

Unfortunately, with almost all the Latin American in a state of permanent economic crisis, the theoretical advantage of geographical proximity becomes irrelevant for Brazil. Transport cost ( even before the current chaos of container shortage and shipping costs) to the European countries has always been relatively high. Just transporting the blocks from Salvador to the port of Vitoria, in Espirito Santo, for example, by road costs as much as shipping to the ports in Italy.

2. The exchange rate volatility is never far from the surface. No matter how aesthetically pleasing and unique the materials be, there is always strong competition from other players like India, for example, but, even more, from local companies. Which means there is always a price pressure. Which means, when the volatile Brazilian currency becomes stronger, it is not so easy for companies to raise their prices. Margins soon come under strong pressure. The graphs show that exports over the years have not really grown so much when measured in US dollars, which means it is the weakening currency, the real, which is a key driver of its competitiveness. 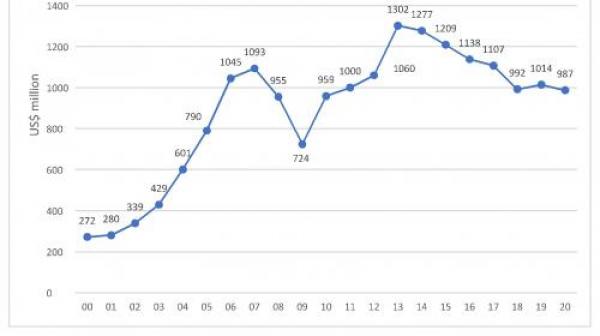 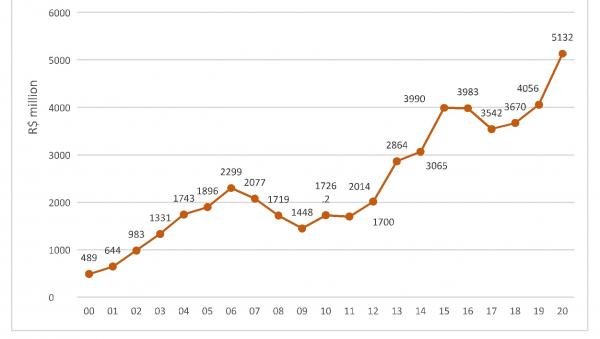 3. Limited range of products is another vulnerability. For all the spectacular varieties of stones, most sales are of slabs, and just slabs, mostly polished slabs. There are still too few companies in Brazil capable of doing cut to size. What other innovative products have come out of Brazil? For example, furniture, etc.? For now, negligible. Most of the industry still has basically a B to B business model, which means being in the middle, exposed to pricing pressures and, more dangerously, away from the end customer. Even now, for an industry of this size, there are not many companies are able to reach out directly to interior designers and architects, for example. (It must be stated that this weak underbelly is also the case of companies in other countries).

1. The current positive momentum is certainly being well made use of by many BrazilIan companies. Major investments continue to be made in machinery, both in the quarries and in the factories.

2. Nothing can be done about local infraestructure, or shipping costs, or much with respect to increasing the size of the local market. Volatility is, unfortunately, a very persistent characteristic of the Brazilian economy. But surely, as the current leading stone producer, BrazilIan companies should also be opening the way to new applications or a new kind of customer!  To be sure, in the current complicated economic climate, with the pandemic playing havoc in Brazil, to be clocking in an all time récord level of exports in the month of March 2021, reaching a figure of US 96 million dollars, has to be extremely satisfying. But this is also that rare moment when while justifiably celebrating the good fortune, the stone industry people from Brazil will do well to reflect on a more solid, sustainable, more long term business model. If not now, when?

NOTE: Thanks to Paulo F. Giafarov for the information and Cid Chiodi Filho for the graphics provided.