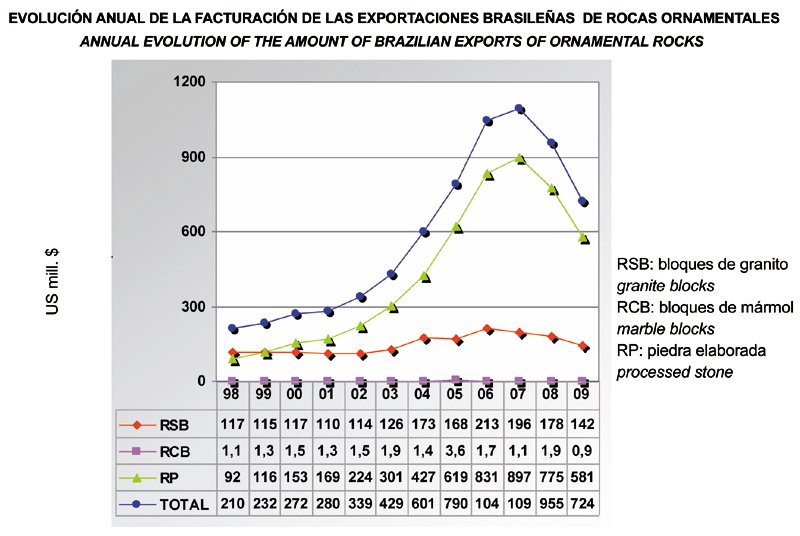 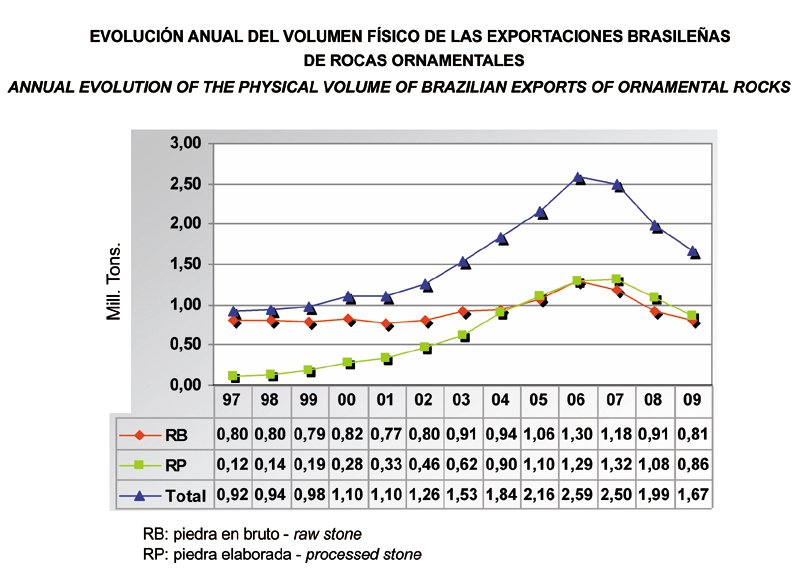 The Brazilian exports of ornamental rocks ended 2009 with a sales figure of US$ 724.1 million, corresponding to the commercialisation of 1,672,624 tons of diverse products. Compared to 2008, these exports figures meant a fall of 24.15% in sales and of 15.94% in total physical volume, numbers that were less than that of 2005.

In all the products exported, except for that of soapstone and the polished slabs of carbonate rocks, there was a negative variation of the average price of 2009 with respect to 2008.

The rate of variations of sales of the Brazilian exports of rocks had a negative evolution with respect to 2008 that fluctuated between –48, 63% in January and –24.15% in the total period from January to December, which suggests a gradual recovery in the markets. However, must one observe that the annual rate of growth in exports dropped from +32.3% in 2006 to – 4.62% in 2007, which reflects a loss of Brazilian competitivity in the international markets even before the world economic crisis.

Among the main group of products exported, the greatest decrease in sales (-34.1%) was registered by slate. Its strong sensibility to the exchange rate and dependence on the exports placed the producing companies in a very difficult situation.

The only positive variation in sales (+8.8%) corresponded to the soapstone products, recovering thus partially from the strong decline in 2008, even though the sales were less than in 2007.

It seems the cycle of positive variation of the average price of the polished granite slabs observed between 2005 and 2008 and which lasted during the “irrational exuberance” of the world real estate markets, especially the United States, has finally ended. For the Brazilian exports, a fall in the average price of its products along with the decline of the US dollar, has become one of the biggest problems.

With the general increase in the costs of production, with an exchange rate that varies between Real- 1.7-1.8 / US $ 1, it will be difficult for the Brazilian exporters to do well in 2010. In current conditions, the increase in Brazilian imports of ornamental rocks ought to be higher than that of exports, because the emerging markets (with Brazil leading) will become priority objectives of the main “world players” in the sector of ornamental rocks.

The effects of the international crisis has broken the sustaining base of exports, due to the decline in external demand, the fall in international prices and the increase in the exchange rate, in this case due to the strong inflows of the dollar. Therefore, the Brazilian exports suffered a fall of 22.7% in 2009, with a more significant fall in manufactured products.

This report, of which we publish a summary, has been elaborated by the geologist Cid Chiodi Filho-Kistemann & Chiodi Assessoria e Projetos, for ABIROCHAS-the Brazilian Association for Industries of Ornamental Rocks. The date on exports can be obtained in the Base ALICE do MDIC (www.aliceweb.desenvolvimento.gov.br)