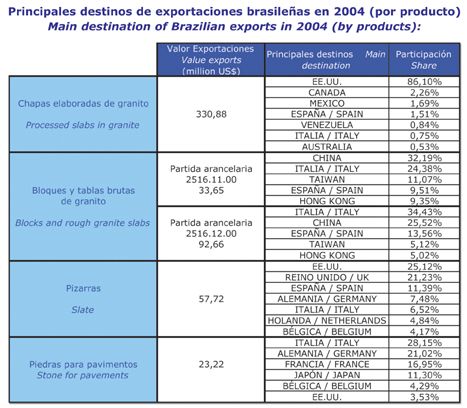 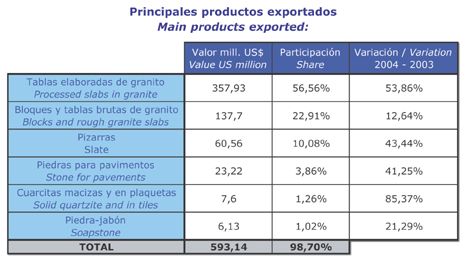 The exports of ornamental rocks of Brazil broke the historical record of growth in 2004, reaching 600 million US Dollars, which meant an increase of almost 40% with respect to 2003. In tons, the exports figure was 1,840,434, which represented an increase of 20% on the previous year.

The share of exports of Brazilian stone out of the total exports of the country was of 0,62%, and is expected to reach 1%in 2006.

The export of processed stone was 427 million US Dollars, about 71% of total sales, registering an increase of almost 42% in value and 41% in volume compared to 2003. The main products exported were: processed slabs (55% of total sales) and blocks and rough granite slabs (27,42%).

The main destination of exports of Brazilian ornamental rocks continues to be the United States; the exports to this country increased significantly during 2004.

For 2005 the level of exports is expected to maintain this level or decrease slightly. Sales of between 780 to 810 million US Dollars is projected for the end of the current year, a goal that can be achieved if the demand in the internal and exterior markets do not exceed the production capacity of the almost saturated Brazilian processing capacity, if there are no problems of logistics in the ports of 2004, and if the tendency of the devaluation of the dollar against the real is reversed.*

*NOTE: This is a summary of the text elaborated by the geologist Cid Chiodi Filho- Kistemann and Chiodi Assesoria e Projetos for ABIROCHAS, Brazilian Association of the Industry of Ornamental Rocks. Data on exports obtained from the base ALICE of MDIC. For more information, contact: cdchiodi@terra.com.br