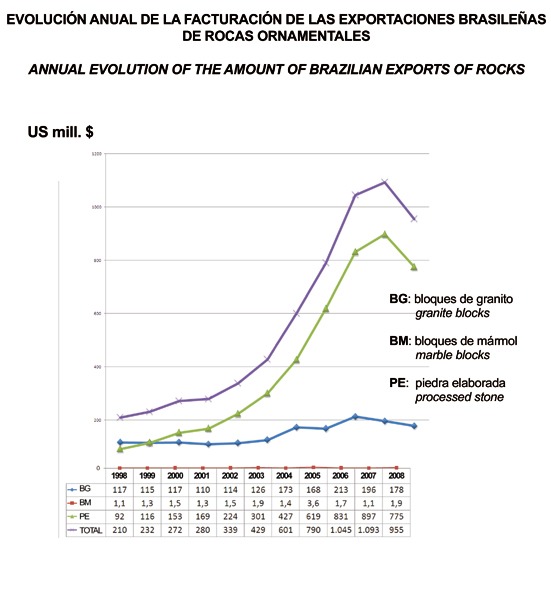 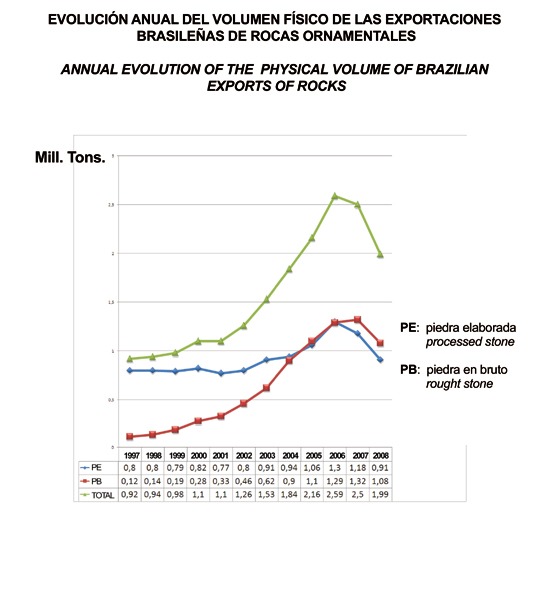 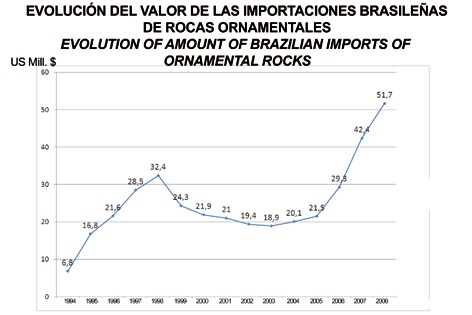 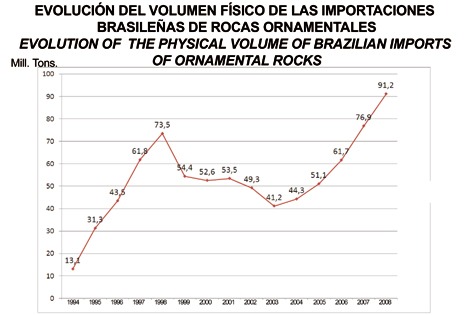 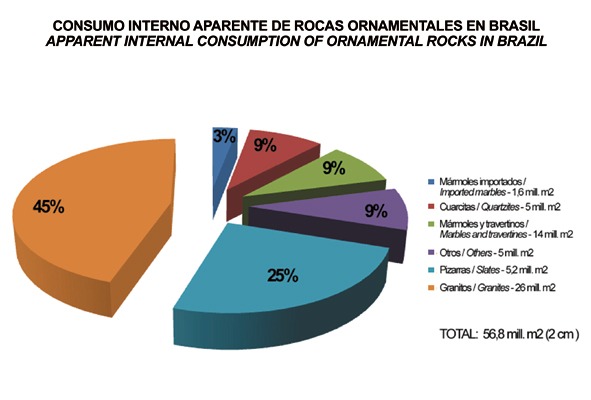 The developments of the Brazilian exports of ornamental rocks in 2008 reflected the crisis in the housing market in the United States and the world economic recession. Exports reached the figure of US$ 954 million, corresponding to sales of slightly less than 2 million tons, which meant a negative variation of 13, 17% and 20, 98% respectively, with respect to 2007.

The exports of blocks and sawed slabs of marble, travertine and limestone amounted to US$1,9 million and around 7000 tons, a positive variation of 71,6% and 19,5%, respectively, compared to 2007, and it accounted for 0,2% of the sales and 0,33% of the physical volume of the sector exports.

The material which has seen the best results was slate, the sales of which increased by 2, 8% with respect to 2007. The negative variation of physical volume commercialised of slate (approximately 10%) was less than that of other important materials.

The most significant percentage decrease in physical volume was registered by soap stone   (-48%). In absolute numbers, the  greatest  fall in volume refers to  exports of  granite  blocks (-290000 tons) and polished  slabs  of  granite (-173000 tons).

This increase in average price, added to the revaluation of the US dollar in the second half of 2008, minimized the effects of the fall in volume of exports.

The state of Espiritu Santo continues to be the first exporter of the country (66% of sales and 56, 5% in physical volume of exports). It is followed by Minas Gerais, Rio de Janeiro, Santa Catarina, Sao Paolo, Bahia, Ceará, Pernambuco, Paraíba and Paraná.

China once again occupied the second place in terms of sales, followed by Italy, Canada, Spain and the United Kingdom. These 6 countries received 77, 9% of the total Brazilian exports.

Almost 100% of the sales to USA were processed stone, while Chinese imports almost exclusively consisted of blocks.

As in the case of Brazilian products exported, there was a positive variation in the average price of the main ornamental rocks products imported in 2008, a variation which when compared to the prices in 2007, has oscillated between 8, 1% to 12, 2%, depending on the type of product

In spite of the deceleration in the growth of civil construction in Brazil which is expected in 2009, the local market continues to be a better alternative to the exterior markets in the short term.

Report elaborated by geologist Cid Chiodi Filho - Kistemann & Chiodi Assessoria e Projetos, for ABIROCHAS (Brazilian Association of the Industry of Ornamental Rocks) on 26 January 2008. The data on exportas nad imports have been obtained from the base ALICE of MDIC (www.aliceweb.desenvolvimento.gov.br).