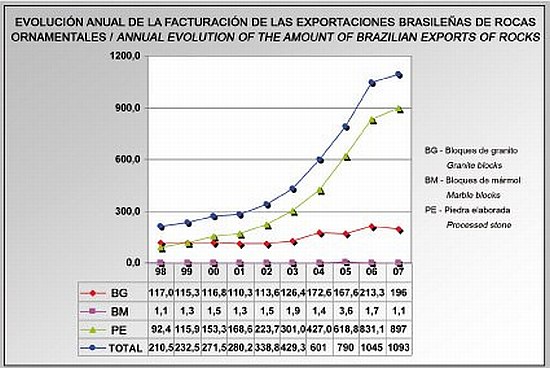 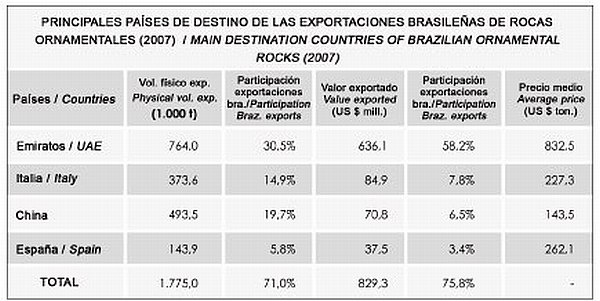 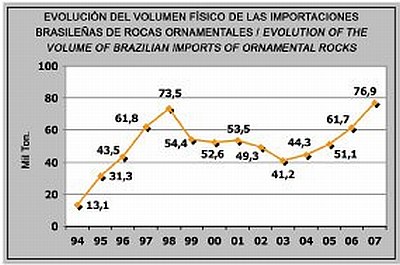 The evolution of Brazilian exports of ornamental rocks during 2007 broke the tendency of strong growth registered in the last five years, practically repeating the results of 2006. The exports in 2007 reached US $ 1093 million, corresponding to sales of 2.5 million tons of rough and elaborated stone.

Compared to 2006, there was a positive variation of 4.62% in revenue and a negative index of 3.39% in the physical volume exported. This situation reflects the crisis in the housing market in the United States, which worsened in the second half of 2007.

In a certain way, the current situation is the result of bad pricing policies of the companies during the period following the huge devaluation of the local currency, real, in the second half of the decade of the nineties. In this sense it must be highlighted that the average price for polished slabs of granite continues to be less than that before 1999. It is probable, therefore, that there will continue to be a decrease in the number of exporting companies of natural stone, since the margins are increasingly less.

The United States continues to be the main destination of Brazilian exports in the sector of ornamental rocks. In 2007 the exports to the United States reached US $ 636.1 million and 764,000 tons, which represents 58.2% of the total sales and 30.1 % of the physical volume of total exports. 99.89% of this sales figure and 99.34% of this volume consists of processed stone with high value added.

In spite of the growth registered compared to 2006, the exports of the sector have not generated employment during 2007. To compensate for the strengthening of the currency and the consequent loss of profit margins, a number of companies have carried out, mostly in the second half of 2007, what has been denominated “defensive productivity”, consisting of reduction of production and in the personnel.

The participation of the exports of ornamental rocks in the total of Brazilian exports went down from 0.76% in 2006 to 0.68% in 2007. For the first time in 5 years, the growth of the exports of stone was inferior to that of the overall exports of the country.

As a result of the strengthening of the local currency, now also pushed by the increase in the local market, the rates of growth of imports exceeded that of exports of stone in 2007. Imports reached US $ 42.4 million and 7690 tons, which represented an increase of 44.6% and 24.55% respectively compared to 2006.

As in exports, there was a positive variation in the average price of the main imported products during 2007.

As a function of growth registered in the year 2007, also predicted for 2008, the internal market could become an alternative to the foreign markets.

Report elaborated by Cid Chiodi Filho – Kisteman & Chiodi Assesorias e Projetos for ABIROCHAS (Brazilian Association of the Industry of Ornamental Rocks) on 23th January 2008. The data on exports have been obtained from the base ALICE.