New Year's Concert, coffee house culture and Red Bull are not all that Austria has to offer. Natural stones, for example - which were and are popular throughout Europe...
There was a time in Austria when natural stone played the first violin in the dance of the building materials. Kaiser Franz Joseph I. ordered in 1857 the destruction of the medieval fortifications around Vienna. What had once helped against the Turks, became the emerging capital of the Austro-Hungarian Empire that was being built.
The razing of the walls created a lot of space around the first district in the center of Vienna. This marked the beginning of an unprecedented construction activity. The Parliament, the Opera, the Kunsthistorisches Museum and others historical prestigious buildings sprang up along the newly created Ringstrasse. Plus a number of private villas of the aristocracy and the rising bourgeoisie: The construction boom caused a tremendous demand for stone - for the facades, the representative staircases and for the pavements. And there was plenty of stone in the Empire. Eight meter high columns made of Adnet marble for the portico in Parliament were technically and logistically no problem, neither were millions of small paving stones for the five-kilometer ring road.
The huge demand in the Danube metropolis of Vienna, Bratislava and Budapest for building and decorative stones provided the spark for the rise of stone processing units throughout the Empire. Thousands of workers found their livelihood in the stone works, leading to mushrooming of schools for stonemasons in Austria, Czech Republic, Hungary and other countries of the Habsburg Crown for the training of stonemasons, in quarrying and of sculptors.  Only the end of the monarchy slowed the boom in stone. An upturn as during the Empire has never again been experienced by the natural stone industry in Austria. The spirit of the age wanted new building materials and surfaces. The facades were basically of concrete, brick and plaster. Many types of natural stone were exhausted, unprofitable in mining or were unreachable after the First World War from abroad.

Nevertheless, Austria is rich in stones. Around 25 varieties are being commercially mined between Vorarlberg and Burgenland. From dark gray Gebhartser syenite to the rainbow-coloured Sölker marble they are there in all degrees of hardness and colours. In the north and interior of Austria there are quarries of the granite Waldviertel. Towards the end of the 19th century the railroad opened up the sparsely populated regions, and that began the heyday of Waldviertler Granite. 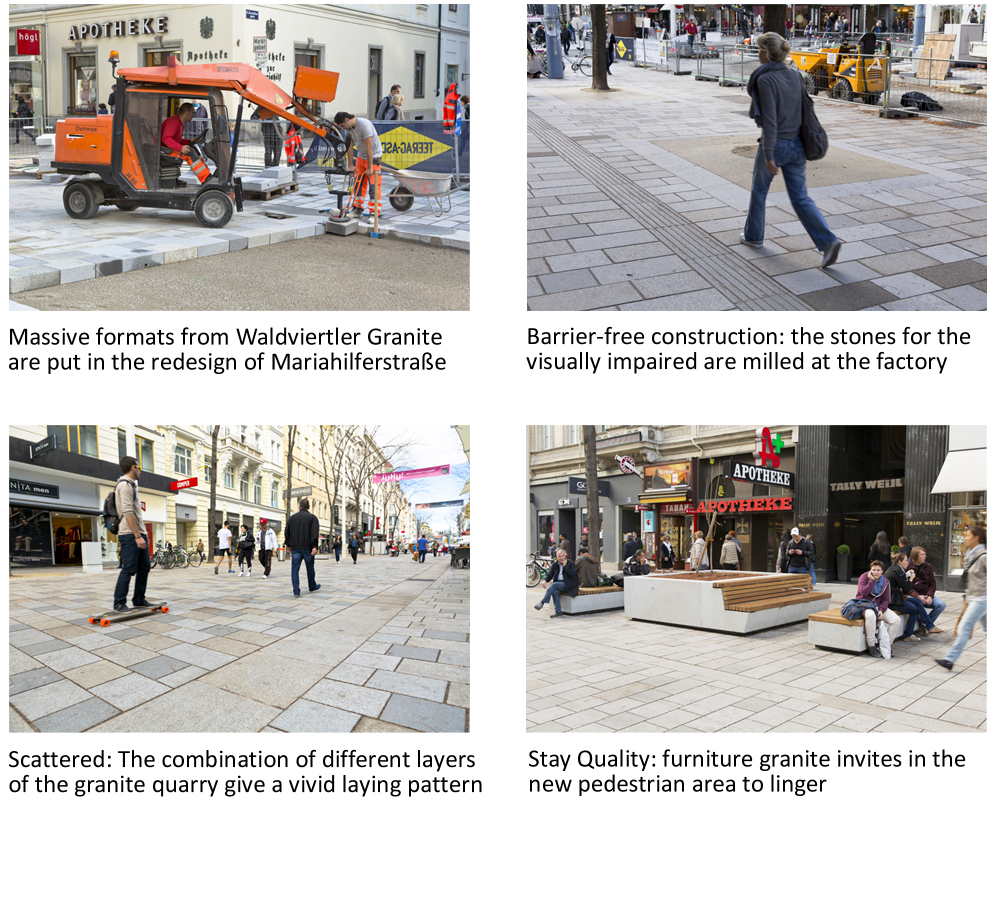 Within a radius of five kilometers there are seven varieties: the grey granite, sandy Herschenberger, the darker Hartenberger, the fine grain Schrems , a grey stone,  the very dark and bluish Gebhartser Aalfanger. These granites are used mainly for outdoor use, in the squares in Vienna or Innsbruck, but also for major train stations as in Linz, or shopping malls. One example of this type is Kärntnerstraße, in Vienna, completed end of 2009. Another example, this of archaic style, is the redesign of a traffic circle in Maurach in Tirol. Three columns of five metres high with crosspieces elaborated in Aalfanger granite form a modern Stonehenge that serves to  separate the traffic and pedestrians from each other and create a theatrical access to the lake Achensee.
Adnet and Untersberg marble are the two main exports from the province of Salzburg. Petrographic ally both are limestones, but the word marble sounds much better. Since the Roman times, the beige Adneter and reddish brown Unterberger complement each other. In the historical churches throughout Europe one can see the two stones in the form of a checkboard. Especially the fine-grained and dense Unterberger which was utilized by the architect of the Bavarian Court. Leo von Klenze used it in the name of the Bavarian King Ludwig I in a big way for the Hall of Fame of Walhalla near Regensburg. To date, the limestone from Salzburg Unterberg is one of the most popular building materials in Austria; this stone runs like a red thread throughout the history of architecture and art of Europe. Private construction projects and the preservation of historical monuments provide a continuing demand.

At an altitude of 1700 meters the stone Tauerngrün stands out in the National Park Hohe Tauern. The dark to olive serpentinite and the fine veins of white and green calcite is a characteristic. Because of its robust color and resistance to frost and de-icing salts, the decorative stone is used both in the interior and exterior architecture. It is widely used in the cemetery.

Unmistakable also is Sölker marble from Styria. Since Roman times the robust and lively, patterned stone is mined in 1600 meters above sea level above the Sölktal. A spectacular example of its use is the two-piece sculpture, completed in 2007, in the park of the Bank Santander in Mönchengladbach. The highly crystalline colored marble, is characterised by pink colour structure and has layers of green,-gray and black. It is widely used in the spas, as well as in the upscale hotel s. It is translucent till three centimeters thickness.

The stone industry in Austria urgently needs an innovative focus such as design in illumination or in the quality of the projects that place natural stones from the regions of Austria in the first level. In recent years, especially the grey granite from Austria has come under considerable pressure. Very cheap stones from China came into the market. The penny-pinching mentality hit the Austrian processors of stones. Meanwhile, the mood among planners and builders is changing again, who now prefer more local natural stones. The very cheap stones are increasingly left to the hardware stores. For the handicrafts and natural stone industry there is a great opportunity. With regional, proven materials and competent new talent this is the moment to do diverse marketing efforts and create demand. How well this sounds choosing again between Bregenz or Eisenstadt!
Photos: Richard Watzke