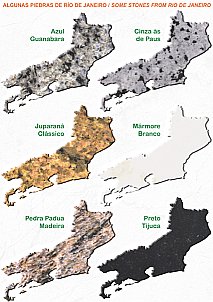 Rio de Janeiro. Just the name brings to the mind images of interminable beaches, exuberant mountains, and, of course, the carnival. A city always in fiesta. But we cannot restrict ourselves to the topics already well known. No one can deny that nature has been very generous with Rio de Janeiro, but what but everyone does not know the state of Rio de Janeiro also possesses an important stone industry.

In spite of the fact that, for environmental reasons, many of the quarries have been closing down, since due to the growth of the city, they were located amidst the population, some of the biggest exporting companies of Brazil are located in the state of Rio de Janeiro.

The industry of granite in Brazil began in Rio de Janeiro before it did so in Minas Gerais or Espiritu Santo. The first granites that were exported from Brazil were Juparana, Negro Tijuca and Verde Ubatuba Classic, materials that are no longer extracted, and the quarries of which were located in Rio.

Rio de Janeiro was in its time an important producer of ornamental rocks. Towards the end of the eighties the environmental problems mentioned before led to the closing down of the quarries. Espirito Santo began to grow after the decadence of Rio.

From 1997 to 2002, exports increased by 242%, owing to the implantation of modern technology in the factories. Between 2002 and 2003 exports increased by 13%. The state of Rio de Janeiro has a very important level of exports, it occupies the second place in exports of elaborated stone in Brazil, the first place going to Espiritu Santo, and the total figure for 2004 could reach as much as US 150 million dollars.

SOME COMPANIES (in alphabetical order)

This company has been functioning for 17 years. It began commercializing blocks of Juparana Classic, Santa Cecilia, Azul Bahia, Azul Macaubas, Verde Ubatuba and Golden Beach. Since the last eight years it has its own quarries of Tiffany, Verde Lavras, Branco Piracema and Verde San Francisco. Five years ago it started becoming an importer of stone and started distributing slabs all over Brazil, with strong presence of imported marble. In the beginning of 2005 it begins production in its own factory of slabs in Espiritu Santo.It now has three new materials: Quartzite Ipanema, from Minas Gerais, and four new materials from Bahia, including Negro Absoluto.

This company was created four years ago with the objective of exporting. It does not have its own quarries, it purchases blocks in Espiritu Santo and Bahia. It has 2 gang saws and a polishing line. The company produces slabs of 3 cm (which constitutes 70% of production) and of 2 cm (30%).

95% of its market is the United States, its objective now is to diversify its markets. It sells in the local market those materials which do not meet the quality controls. The materials most in demand are the greens and the yellows.

It is one of the big companies of Rio de Janeiro. The company has its own quarry of Azul Bahia in the state of Bahia and in its factory in Rio it has 6 gang saws. It works with materials from Espiritu Santo. United States is among its most important markets. The company Marmifera sells blocks only to Italy.

In the city of Santo Antonio de Padua, 240 km north of the capital, can be found the deposits of the stones of Padua and Madeira stone. They are stones the colours of which vary from grey to yellow, which are extracted manually, are present as flat stones, in a form similar to slate, and it has an important market for cubes and pavements. Most of the companies of the area are small and work with stone in a practically artisan way.

Since four years the project Pedras de Padua was initiated, in collaboration with SEBRAE (Service of Support to Micro companies of Rio de Janeiro) with the objective of unifying the efforts of the small companies, development of the industry while maintaining an ecological equilibrium, and to increase number of markets. The first exports were done four years ago to Spain. Today the extraction of this stone forms the biggest economic activity of the region.

This company has been functioning since about 20 years. The factory of Rio has 8 gang saws, and, moreover, there are 16 gang saws in Cachoeiro (Espiritu Santo) which produce for the company. The company exports about 200 containers per month to more than 35 different countries and imports slabs for sale in the local market. It imports about 100 containers. It has the exclusivity for the granite YELLOW RIVER the quarry of which is in Espiritu Santo and, moreover, it possesses six quarries.

The consortium RIOSTONES was created in November, 2002. It is a combination of very small companies with the objective of exporting. It has the support of APEX (federal organization for supporting exports). It is formed by 12 companies, out of the 80 which form part of the association in the stone industry (SINDIGRAN). Riostones is formed by companies of three types: quarry work, elaborating companies and workshops. The product exported is mainly worked stone. The consortium sells to stone companies and not constructors. It has clients in United States, England, the Arabic world and Asia. It has been functioning for two years and exports an average of 10 containers per month.

This company, created in 1972, possesses the quarry of one of the most exclusive and expensive materials in the world: the granite Azul Bahia. Sao Sebastiao has its offices in Rio de Janeiro, with a subsidiary in Bahia. The quarry, located in the south of the state of Bahia, produces 130 cubic metres per month, and 99% of the production is exported. Italy, the Arab countries, United States, Germany and Spain are its main markets. 90% of the material is exported in blocks though slabs and tiles are also sold by the company.

This company is the biggest exporting company of Brazil and the number one exporter of slabs in South America. The company has its own quarries and some materials on a exclusive basis. It works with a range of between 70 and 80 colours. It has a factory in Rio with 6 gang saws and another in the state of Espiritu Santo with 8 gang saws.

By the end of 2004 finalized an important phase of expansion and wants to diversify exports all over the world. Its main market is the United States, as is the case with almost all companies of Brazil, but it also has an important presence in Latin America.