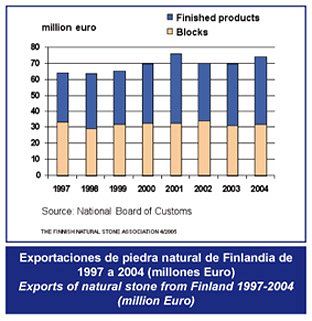 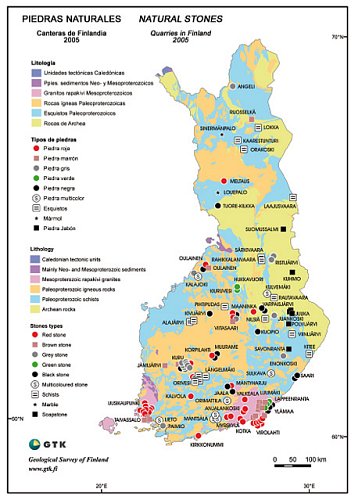 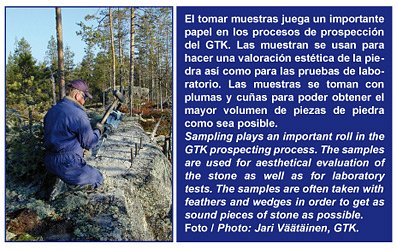 The main types of natural stone produced in Finland are granite, schist, marble, and soapstone with focus on granite and soapstone. The two main granite production centres are the rapakivi granite areas in southwestern and in southeastern Finland, while soapstone is produced mainly in the municipality of Juuka in eastern Finland.

Finland is one of the major exporters of granite and a world-leader in soapstone production. The annual turnover of the industry is approx. 200 million Euro, divided equally between soapstone and granite products. The value of export is approx. 40% of the turnover. Approx. 200 actively operating companies are found in the line of natural stone business in Finland, employing approx. 2000 persons (with spin-off approx. 3000 persons).

During the last years development efforts in the Finnish stone sector have been very intense. The involvement of the natural stone industry in developing the sector has been substantial through the STONE Technology and development programme, accomplished in 1999-2002 with projects financed by the National Technology Agency of Finland, the Ministry of Trade and Industry, the Ministry of the Environment, the Ministry of Labour, research institutes, and the stone industry itself. The programme was coordinated by the Finnish Natural Stone Association. Within the development programme 55 separate projects have been realized with a total cost of approx. 8 million Euro.

Besides the results from the specific projects the main outcome from the programme is the establishing of an improved research, education, and development culture within the Finnish stone sector.

Geological Survey of Finland (GTK) is a national geoscience expert agency under the Ministry of Trade and Industry with five offices: Espoo in southern, Kuopio and Outokumpu in eastern, Kokkola in the western and Rovaniemi in northern Finland. GTK started with natural stone exploration at the end of 1980’s with limited regional projects focused on separate municipalities or special bodies of rock. In 1995 a wide regional investigation started in eastern Finland with projects covering whole regions, together forming a project called the “New Stone Resources in Finland”. Today, projects of this kind have been executed in northern, central, southern, and southeastern Finland. The projects are commonly financed partly by the European Union regional development fund and partly by local authorities, stone industry, and GTK. The goal is to assess the whole country for the natural stone potential. Furthermore, GTK is engaged with development of natural stone prospects and quarries, environmental studies, and detailed commissions from the stone industry.

Production and deposits in Finland

Production of natural stone in Finland has been increasing during the last years. The total production in 2004 was nearly 800000 tons, including extraction of granite, schist, and soapstone.

Granite is extracted in large volumes from 20-30 sites as rough blocks for the export markets. The granites are typically red, brown, grey, green, and black. The main rock type is rapakivi granite, which is quarried in SW and in SE Finland. “Balmoral Red fine-grained” and “Balmoral Red coarse-grained” are traditional Finnish stones produced in SW Finland. “Carmen Red”, “Eagle Red”, and “Karelia Red” are red rapakivi granites, and “Baltic Brown” a brown variety extracted in SE Finland. Because of the large-scale production these stones are well-suited for projects demanding substantial amounts of homogeneous material.

Most schist quarries are located in central and eastern Finland with stones like “Orivesi Schist”, “Alajärvi Schist”, and “Nilsiä Quartzite”. The stones are used domestically as fireplaces, as paving stones, and in popular urban applications.

Marble deposits, mostly for domestic use, are found in the Finnish Lapland, the most famous being “Lappia Green”.

During the last decades soapstone has become more and more important for the Finnish stone business and today it covers half of the turnover of the Finnish natural stone trade. Soapstone has an excellent capacity to store heat, contributing to its use for fireplaces and ovens. The principal location for soapstone production is the municipality of Juuka in eastern Finland. Trademarks include “Tulikivi Classic” and “Nunna Soapstone”. Soapstone is produced both for the international and domestic markets.

Prospecting of geological raw material as well as research on the sustainable use of the natural resources is among the most important tasks of GTK. In natural stone projects GTK brings together parties involved in development of their own expertise or business. In the key role are the existing stone industry and new entrepreneurs. They are the main players of the stone market and give invaluable knowledge of the market situation during the projects. Central actors are also the regional authorities, the municipalities, and the local developing companies as well as the local environmental authorities. GTK’s strength lies in its vast geological material, which can be utilized and reproduced in the purpose of natural stone development. The objective of GTK is to promote the profitable and environmentally sustainable natural stone production.

For the regional scale exploration carried out by GTK a step-by-step process has been developed, ensuring the quality of the work. The exploration starts with analysis of the existing research material on the general geological characteristics of the area, the environmental restrictions and possibilities, and the locations of the prospects.

The main part of the exploration process involves field mapping. The most important factors to observe are the soundness, the appearance, and the homogeneity of the rock together with the environmental aspects. If it seems that the prospect has potential for natural stone production it is examined more closely, including sampling for laboratory tests. Furthermore, large samples are taken for aesthetical evaluation and workability tests.

The prospects are introduced to the natural stone industry, and further development is done in close cooperation with the companies. These closer analyses consist of more detailed mapping, sampling and usually the use of ground penetrating radar and diamond core drilling.

In exploration projects GTK has, together with regional parties and companies, gained effective results. For example, the project “New Stone Resources in Finland” generated six new quarries in as many new stone types in eastern Finland. Another example is the development of the reserves for soapstone industry in eastern Finland, leading to investments, establishment of new quarries and factories and employment of over a hundred people in areas, where employment is generally considered difficult.

Besides exploration for new deposits GTK is constantly involved with research and development of natural stone sector. Research topics are related, e.g. to geological and environmental aspects of natural stone.

Environmental issues have become more and more important part of the stone world, and they are one of the main challenges for the natural stone sector, including environmental impact of the production, use of the leftover stone, life-cycle assessment etc. To meet this challenge GTK coordinated a large multi-scientific environmental project regarding the environmental impact of natural stone industry during 1999-2002. The study comprised of research on ground water issues, noise, dust, vibration, radiation, waste, and the life cycle. The study results show that the impact is restricted mainly to the actual quarry area.

One of the development focuses in natural stone quarrying is the management of leftover stone with the goal to increase the recovery of the quarries. The challenges connected to the leftover stone cover a vast area, reaching from material research, data bases, and environmental suitability to product development, logistics, legal status, and land use planning.

GTK has actively built up networks in natural stone research and development not only in Finland but also abroad. Networks combining research and development activities in the European Union (EU) have been created in several large international projects, the latest being OSNET (Ornamental Stone Network), in which GTK is also involved. OSNET comprises about 60 member organizations from industry, universities, educational institutes, research organizations etc. The aim has been to provide the necessary forum to share problems and experiences and to facilitate the transfer and incorporation of technology to the interested European market companies and organizations.

A new core for development activities in the field of natural stone in Finland is the Finnish Stone Centre, raised in the municipality of Juuka in North Karelia. The Stone Centre holds premises for exhibition activities, education, testing laboratory and also for small sized companies. The Stone Centre was opened in the summer of 2003.

The Finnish Stone Centre is a special example of the development work of GTK in the form of the participation for planning, financing, and establishment of the Geo Knowledge Centre exhibition as a part of the Stone Centre. The exhibition demonstrates the whole variety of the use of stone, from the stone ages to modern industry, especially showing the different aspects and uses of natural stone and the Finnish stone industry particularly.

In the Geo Knowledge Centre natural stone companies will introduce natural stone varieties of Finland, which are currently produced, with their special surface treatments. Multimedia programs will advice the visitor on the use of the stones.

The Finnish stone industry is concentrating its future development actions in a new development company Stone Pole Ltd. The aim of the company is to organize and manage R&D projects, manage a stone testing laboratory, and to organize and coordinate training and education activities. The company is also responsible for the operative functions of the Finnish Stone Centre.

The year of 2004 was declared by the Finnish Natural Stone Association as the Year of Stone 2004 in Finland. The objective was to increase the use of stone, which was achieved by informing people of the possibilities of the usage of stone. During the Year projects involving communication, exhibitions, training, research, product development, and export marketing were implemented. Of particular interest was the development of stone products designed for ordinary people, and the aim of bringing the stone close to the common consumers.

An International Stone Fair, Nordic Stone 2006 (16.-18.2.06), which is now being held for the second time, is backed by the Finnish Natural Stone Association in co-operation with the Finnish Association of Landscape Industries and the Association of Finnish Landscape Constructors. In addition to exhibition stands the fair also hosts high-standard seminars. More information: www.turunmessukeskus.fi.

- Aatos, S. (ed.) 2003. Environmental impact during the life cycle of Finnish natural stone production. The Finnish Environment 656. Ministry of the Environment. 188 pp. (In Finnish with an English summary).