The Nordic countries, small though they may be in terms of population, they do have an interesting range of natural stone deposits, some of which are actually well known in the international markets. This article highlights the granites of Finland.
If Norway is generally associated with the blue granites, the colour that is most associated with Finnish granite industry is brown and, to a certain extent, the red colour. Every quarry company in Finland usually has the brown granite among the product mix. While these are the colours from the country that predominate in the natural stone industry in the international markets, there are also other colours available and the quarries are being commercially operated.
The granite quarrying industry in Finland is not a recently developed activity as is the case in many countries. The company Tampereen Kovakivi Oy, for example, celebrated its 100th anniversary in 2014. Palin Granit was formed in 1921, in the beginning it made monuments, then diversified in construction but is now focusing on quarrying. The third generation is running the company with the fourth one getting ready to join in. Currently there are around 10 companies dedicated to quarrying of granites. 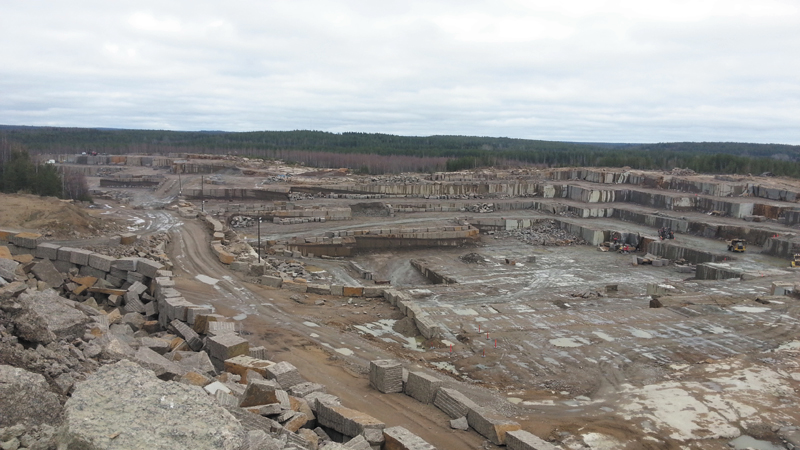 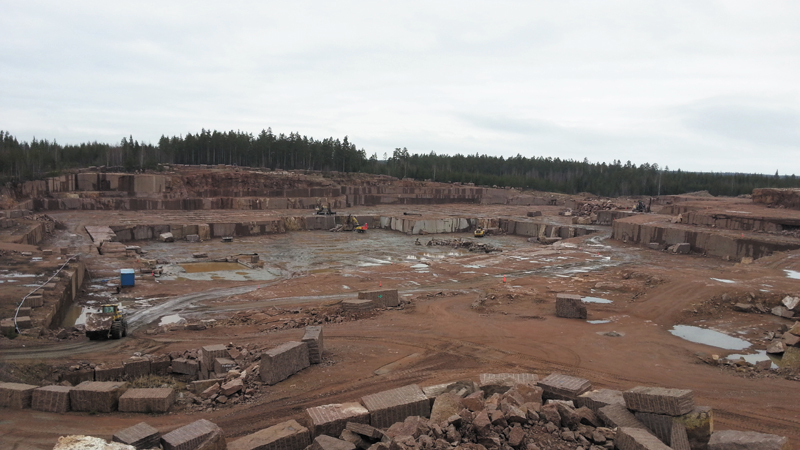 Red granites
Two to three decades ago red was the predominant granite colour being exported out of Finland and Balmoral Red was the standard bearer when this colour was in fashion. Red granite quarries are located in the Turku area.
The varieties of Red granites can be basically divided into the following:

Black granites
There are several small black quarries mainly for the domestic use only. In Varpaisjärvi, Palin Granit is quarrying PG Black diabase mainly for monument and kitchen top production in Finland. This black granite is also exported to Baltic countries and Poland for monuments.
A new black granite quarry has recently been reopened by TG Granit only 2 years ago and the quarry is currently being reconstructed.
Use of granite in Finland
The biggest application of granite in Finland is in facades and walking around the capital one observes a large number of historical buildings with wall facades of granite.
Mostly local materials have been used. In true European style, cobblestones and kerbstones are to be found everywhere too in the cities. About 80% of the construction activity in Finland is in the Helsinki region. Being a country with cold climate use of natural stone in floorings is not very common where wood is the main material being used. According to Pauli Immonen of SGK, one of the leading contracting companies in the country, about 60% of the material installed is local and the rest is imported. Currently the construction activity is quite dynamic in the capital with signs of building activity to be seen everywhere. Three shopping malls are currently being built. Six metro stations will be completed before end of 2016 and each of them has around 5000 sqm of stone.  A huge urban renewal project is going on in what was previously the port area and where housing and commercial buildings are planned. This project may well take a decade to be completed since the Finns seem to have no special desire to spend beyond their means. Granite is also used for kitchen countertops, and there are three major producers in Finland. Ylamaa Group has also set up a factory to supply them.
But where can the foreigners buy semi-finished and finished Finnish granites if most of the materials are exported in the form of blocks? The local processing capacity is limited and focused on the Finnish market. The answer is to buy them from China, India, Italy or Spain, where the Finnish materials are processed in the factories.
Quarrying in the cold
There are many countries with tropical or moderate climates where the natural stone industry is a significant economic activity and where the weather is not much of a criteria in quarrying activities. But how is quarrying done in the extremely cold climates of the Nordic countries? As Jari Vepsäläinen of TG Granit puts it, once the weather goes below   -22ºC, the quarrying activity has to be halted- at this temperature the machines start breaking down due to the metal getting brittle, though the human beings, he says, are perfectly capable of going on. During winter the machines need around 30 minutes to warm up, that is the time the lubricants need to get flowing. Daylight during winter can last barely 4 hours but that does not affect quarry activity, working hours remain from around 7 am to 16 hours and there are lamps all around the quarry.
Environmental policies
The vast size of this thinly populated country means there are still unexplored areas of Finland. Access costs can be high and opening a new quarry is difficult in this highly environment sensitive country that is covered with forests. The Nordic countries are famous for their advanced policies with respect to environmental criteria but they do try to strike a balance between environmental needs and the need for economic activity, be it in mining.
According to Heikki Palin, one of the main criteria for getting permits that is now becoming law is there should be no houses to a distance of at least 300 metres from the quarry independently of whether the land is owned or rented by the company wanting to undertake extraction activity. Noise pollution is, therefore, a big criteria. Leases are usually granted for 10 years though according to the law they can be upto 20 years, and the leases are usually renewed.
To obtain a license for operating a quarry the prospective company needs to present a very clear plan for restoration after the quarry is closed. The plan must clearly state how the recovery will be done and this forms part of the license. Moreover, the lifecycle of the quarry must be of minimum 30 years for the license to be granted. One must also have planned stocking place for the leftover stone. If the recovery rate as defined in terms of commercial blocks is around 10 to 15%, for example, the stocking area for the rest of material must be clearly defined. Moreover, the leftover stone hill cannot be higher than the landscape.
The link with Russia 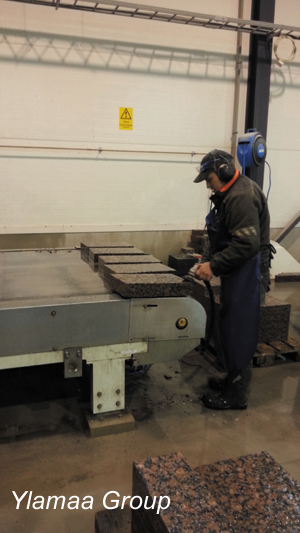 Finland shares a large land border with Russia, and many of the quarries are located so close to the border that one can actually see Russian territory from the Finnish quarries. The quarry of black granite of TG Granit, for example, has a border which is only 20 metres away from the Russian border! Russian helicopters often fly just on the border just to check out what is happening on the Finnish side. One would logically expect similar materials to be found also on the Russian side. But due to security reasons no granite extraction activity is taking place close to the Russian border and neither does there exist, for now, the necessary infrastructure of roads etc. However, in Russian Karelia there are indeed similar materials, all used in the local market, though Baltic Brown quarries are almost all on the Finnish side.
The more relevant link with Russia is with the city of Saint Petersburg, which is just 200 km away from the Finnish border. Finnish stones have been widely used in that city in all kinds of projects and even today Finnish materials are preferred. When Ylämaa Group set up a paving stone factory in Muurikkala, one of the objectives was to supply what they call “Environmental Stone”, exterior paving, to Saint Petersburg, but the current sanctions by the European Union have halted this aspect of the business for now. The Russian market has always been important for the Finnish quarry companies and huge quantities of blocks have ended up in the factories of the neighboring country.
The challenge today
With the slowdown in the Chinese economy, the biggest market for blocks during the last two decades, the Finnish granite industry, in common with quarry operators elsewhere, as of mid- 2016,  is operating well below peak production capacity. While there is reasonable construction activity going on in Helsinki, the local market is just not enough. Leaving the ups and downs of economic cycles aside, when asked the question as to what is their biggest challenge, the quarry operators all seem to think similarly when they reply- How to add value to what is NOT commercial blocks? How to make the quarries more commercial? This, in fact, is the main challenge, not just for Finland, but of quarry operators everywhere in the world.
Now when will we have the answer to these questions?

Note: Our thanks to Heikki Palin, Unto Ahtola, Jouni Okko, AnssI Okko, Jussi Eskelinen, Jari Vepsäläinen and Pauli Immonen for their time and providing information.